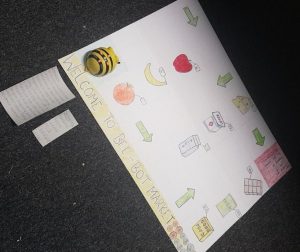 In this weeks Digital Technologies input we were introduced to programmable toys, and how to use these in the classroom to enhance learning in many subjects – not just Technology. We were set the task of designing and planning a Bee-Bot activity with the potential to fulfil one Technology outcome and at least one Numeracy outcome.

Before the input I was already somewhat familiar with the concept of programmable toys as my son received a Fisher-Price Code-a-Pillar as a gift on his third birthday. Observing him playing with the toy, I could see the value of programmable toys as a way to teach young children about logical sequencing and how to put a concept into words (NCTE, 2012). These transferable skills are particularly valuable in the workplace as the technology sector is booming and the ability to code is an asset to any individual wishing to pursue a career in the STEM field.

With these things in mind, it is no wonder that programmable toys are becoming more popular and their uses in the classroom are being exploited across the curriculum, even from the Early Years.

There is a heavy importance placed on Active Learning in the Early Years in the Curriculum for Excellence (Scottish Executive, 2007). It is essential not to teach programming in isolation. For instance, my son found the Code-a-Pillar fun for a few turns but after a while he grew bored of it. The toy moving in different ways depending on how he orders the segments is interesting for him but there are a limited number of different ways these can be sequenced without investing in costly expansion packs.

This is what makes Bee-Bot such a useful tool in the classroom. Its possibilities are not limited only to learning outcomes in Technology and there is an abundance of resources out there to assist with lessons involving Bee-Bot. My group and I were immediately inspired by one of these resources – a suggestion for an activity where bee-bot is given a list to go shopping (Lydon, 2007, p.40). We got to work creating a supermarket on a grid suitable for Bee-Bot to navigate and we designed an activity to meet these Experiences and Outcomes from the Curriculum for Excellence (Scottish Executive, 2004): 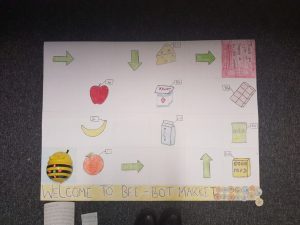 Armed with a shopping list and a ‘purse’ of coins, their job was to guide Bee-Bot to the items on their list (TCH 0-15a, MTH 0-17a) and use coins to help them keep track of the cost of individual items along the way (MNU 0-09a), and at the end of their ‘shopping trip’ to calculate the total cost of their shopping.

There were a number of benefits to this activity as a teacher. It did not take very long to implement the design and the mat could be used again and again with different shopping lists to give the activity varying levels of challenge when it comes to counting the money out. It is also very flexible enough to meet other outcomes, even at first level. For instance, by giving the children a bank note instead of their coins to pay for their shopping, they could try their hand at “[using] money to pay for items and [working] out how much change [they] should receive,” which is outcome MNU 1-09a. There is even scope for meeting Modern Language outcomes in this activity. If the child is supplied with a list in a language such as French or Spanish, this could meet part of the criteria for MLAN 1-08b; “I can work on my own or with others to demonstrate my understanding of words and phrases containing familiar language.”

With Bee-Bot in the classroom, the only thing holding you back is your imagination. There is an abundance of resources available to teachers to help them plan lessons that can utilise Bee-Bot to teach skills not only in Technologies but also across the curriculum. Children in First Level could even design their own mats and stories to go along with them as a Literacy lesson in creative writing.

In my opinion, Bee-Bot is superior in functionality to the only other programmable toy I am familiar with – the Fisher-Price Code-a-Pillar – for a number of reasons. Bee-Bot can store 40 instructions in each sequence whereas the Code-a-Pillar comes with only 8 segments. Bee-Bot moves 15cm with each instruction, meaning it does not take up as much room as the Code-a-Pillar which can move as far as three feet when programmed to move straight ahead. Pekárová (2008) argues that one of the best things about Bee-Bot is that activities can be designed for children that simulate real-life problem-solving scenarios. This is concurrent with the Active Learning environment that is endorsed within the Scottish curriculum in the Early Years. On the other hand, it is hard to imagine a scenario in which the Code-a-Pillar could be linked to real life. It is certainly more colourful than the Bee-Bot, however yet again the latter is unmatched in the amount of resources available online, such as printable ‘outfits’ for Bee-Bot that children can decorate themselves.

As a student teacher with an interest in technology it has been an interesting and fun experience to learn about how programmable toys can be used across the curriculum. I think that Bee-Bot in particular has the potential to provide children with a solid grounding in a number of logical thinking skills, while allowing them to have fun and take part in learning in all areas of the curriculum. I also think it has the potential to support teachers as a useful, incredibly versatile resource. I find myself fully convinced of the benefits of Bee-Bot compared to another programmable toy I have encountered, and I look forward to seeing how else it can be used in the classroom.