I teach on a 3rd year module on the teacher education programme at the University of Dundee. Entitled, Developing Effective Teaching and Learning, it aims to explore how learning can go beyond subject boundaries and in doing so make rich, cohesive, purposeful and relevant links between and across the subject areas. There is a focus on what Curriculum for Excellence in Scotland calls Interdisciplinary learning and we also look at what the IB programme calls Transdisciplinary learning.

I am preparing to teach the inputs that are expressly focused on digital tools and spaces where I will be looking to develop and extend learners digital literacy skills and awareness but in doing so look to explore where other subject areas can naturally sit alongside ICTs so that learning in and across these areas can be enhanced and enriched.

Part of our input explores the potential and benefit of situating learning, in what we may refer to as topic or project work, in the local context. We also look at the power that context can play in helping to suspend learner’s disbelief so that a process of enquiry or a collaborative story might be developed. With this in mind I decided to build on last year’s input where we looked at telling, via the digital medium, the story of yet another iteration in the development and use of the city of Dundee, in Scotland’s, waterfront. A major focus of this has been the use of Google Maps as a context to develop digital literacy skills but also to use it as the means through which researched stories can be dynamically presented and shared. We also touch on how Minecraft can be used in a focused and open-ended way to explore ideas of renewal, change and impact on the places where we live.

A few years back I came across an incredible resource called The Wilderness Downtown. This resource was part of the promotional material for the Arcade Fire’s latest release at that time, The Suburbs. Using HTML5 and the skill, vision and imagination of those at Chrome Experiments an experience was created that asked the ‘player’ to type the postcode of where they grew up into the site and press play. What happened then was breathtaking and actually quite emotional. 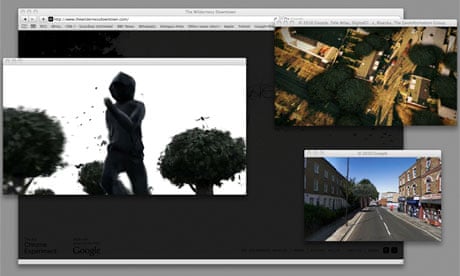 Image from The Guardian. Accessed 30 September 2016

The song We Used to Wait from the album played and as it did various screens appeared to frame the scene of a hooded young person running through unknown streets. Silhouetted images of a flock of birds swooped in and out of the scene until near the end of the song the streets where I grew up appeared on screen and as if a drone was flying around them showed exactly where I grew up. As the momentum gathered digital trees smashed through the pavements of the very streets of my childhood and in some way immediately conveyed to me the transient nature of youth, time and memory – hairs up on the back of my neck and goosebumps time! At the end I had to then send a message to my young self to advise about what my future held for me. It really was an incredible experience. Go try it…

In order to further share and extend my teacher education students awareness of what is available I plan to add some of the Chrome Experiments to our inputs on digital mapping and how this can play its part in enabling learning to go beyond subject boundaries. Here are just some of the ones that I think are pretty impressive and useful: 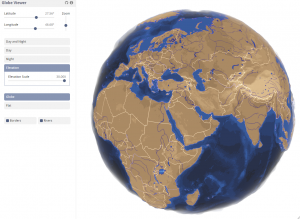 This chrome experiment by Kevin James is one that I think can be used to help learners gain a greater understanding of the shape of planet Earth. When we see visual representations of it the image of the smooth sphere is presented without any bumps or contours. Now as we know our planet goes from the oxygen deprived heights of Mt. Everest to the crushing pressured depths of the Mariana Trench. When you zoom in to the globe on this site you actually see the irregular shape of the Earth and can see the landmass of the Himalaya and other mountain ranges as you spin the globe around. You can also see the depths of the oceans and just how many countries such as Japan sit on edge of the tectonic plates. 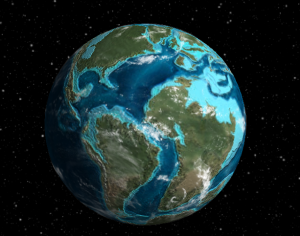 Can you see the distance between South America & Africa?

This Chrome Experiment by Ian Webster is one that I would use when exploring the concept of how the world changes and keeps changing. When the giant earthquake hit japan in 2011 it was said that the whole of the country of Japan moved 8 metres and that the Earth shifted on its axis. The destructive power of the nature of the earth became apparent to human beings at the moment however it was a mere blink of an eye in the ongoing shaping and reshaping of the outer skin of the Earth. This Chrome experiment takes you back to Ediacaran Period and allows you to jump millions of years to the future to present day time. As you jump through you can see Pangaea, the break up of Africa and South America, the movement of Japan as it breaks away from Russia. It is a superb resource that can most certainly illuminate for learners, of any age, this challenging concept. 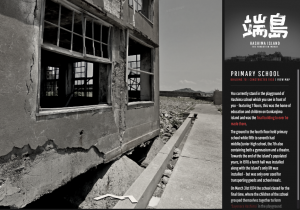 This Chrome Experiment by Bryan James is one that allows the player to take a digital dip through history and discover the secrets & myths hidden amongst Hashima Island’s mysterious, desolate landscape. Now what you might do is explore the real history if Hashima Island, it’s rise as part of the rapid industrialisation of Japan or its dark history as an enforced labour camp, or…you could use it to create your very own collaborative story. The echoing slightly eerie music along with the desolate empty ruins of this place could be the perfect foil for the creation, by a class, of its very own story about this place:

Just think how writing could be at the heart of such a context for an IDL topic/project!

A creative teacher could easily use other mechanisms to begin to form the a realistic backdrop that would make such a learning experience one that pull learners’ in and then take them, places. Have a wander around Hashima Island to get a feel for it and to formulate in your mind’s eye just how your idiosyncratic thinking could make use of this fantastic resource.

Chrome Experiments is a wonderful resource. I will keep trawling through them and will share some more examples at a later date.