In late 2013 I returned to work at the University of Dundee as a lecturer on the MA (Hons) & PGDE(P) teacher education courses having spent seven years working at National level with Learning Teaching Scotland/Education Scotland. One of the first tasks that I was faced with on my return was to hold individual tutorial meetings with 10 students that I had in my Advisor of Studies group. In this tutorial we had to look at their ePortfolio (that sat in our VLE – BlackBoard) and in doing so discuss their progress with it and how it was helping them learn. With each student my opening question was, “Show me your best piece of reflective writing from your 1st year at University.” To a person they all looked at me slightly confused and asked me what I meant. It appeared that my students were seeing the ePortfolio as a place to keep stuff/evidence of having completed tasks as opposed to it being a space that was all about documenting their professional growth mapped against the GTCS’ Standards for Provisional Registration. Further discussions with my students (who were/are all excellent students may I say) revealed that: 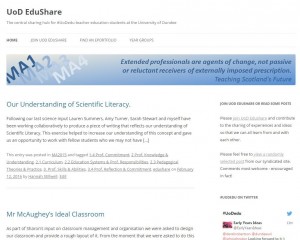 Before I go any further I wish to state that any issues that I felt was seeing was in no way a comment on the standard or commitment to learning on the part of my students, or the rest of that cohort who have expressed similar sentiments, but more an observation of how a University such as ours continually evaluates its own practice/s so that we can ensure that the aspirations for our students are being addressed through the processes that we employ. Where we see the need to make changes we look carefully at the issue at hand and then make informed decisions about to move forward.

As a result of these exchanges with my students  I began to reflect on how improvements could be made to the purpose and experience of the ePortfolio and having just worked at National Level for many years my immediate thoughts went to the digital resources that were available in our much loved (and much maligned in many people’s eyes) national intranet Glow .

Having been one of the members of the team back in 2010/11 who championed the idea of learners’ profiles at the end of P7 and S3 being documented on and shared via WordPress in Glow (before Alex Duff took on and made a good job of the job) the thought of using Categories and Tags to help develop learner agency in documenting their own learning as well as the technical skills to develop and manage their own site greatly appealed to me. This coupled with the arrival of OneDrive and the promise of access to a range of online collaborative tools made me think that there was real merit in exploring the transference of the student ePortfolio at Dundee University from Blackboard into Glow. Discussions with the SMT of the MA (Hons) programme about this proposal went really well and it was agreed that we did have to make a change and that what was being suggested could really help us embed the process of professional reflection in our students  as well as developing their digital competence and confidence.

The planning process went ahead and after being inspired by the syndicated nature of DS106 I came to the idea that our students should have their own WordPress eportfolio based on a template that we designed and that this ePortfolio should then be syndicated to a central site that would pull in students’ reflective posts. This site we called UoD Edushare. Also inspired by David Mitchell’s Quadblogging idea we planned to ensure that our students were divided into peer learning sets with an expectation that they would at least read and comment on the posts of a small peer learning set that they were part of. There was a real attempt here to focus on changing the culture, behaviours and attitudes of professional reflection with the promise of time in the core course programme to water and nurture the seed of this approach.

I approached John Johnston (who was leading on Glowblogs at the time at Education Scotland) to discuss the developing idea. I also spoke with John about what we were doing during a Radio Edutalk interview back in December 2015. John proved to be a huge help with this and in particular with setting up the Sites workflow process on UoDEdushare to help pull in any posts that the students choose to share to the aggregated site. Huge thanks to him.

In late August 2015 our plans went in to action and so with a YouTube playlist – How to UoD EPortfolio – as well as a detailed workflow to set up the ePortfolio, off we ventured in the digital blogosphere. Clearly this wasn’t just about the technical side of things though so quite a bit of time was given in lectures and IT workshops to discuss:

In the short period since we introduced the new ePortfolio format to the MA1 & MA2 cohorts there has been a healthy response from our students to the idea of blogging their professional reflections. It is fair to say that there has been a marked difference in the way that the ePortfolio is now viewed and engaged with by our students. Some early evidence of this includes:

I know it is still very early days for the work that we are doing with the new ePortfolio however I do think that what is in evidence here is the need for those concerned with effective transformational change in the digital learning space to really think about the learning culture that they want to engender and in doing so also think about the ways in which the technology they plan to use can make that happen in an accessible, sustainable and culturally appealing way. The platform does matter as we have clearly found from this experience but so does a focus on a change of practice that can effect a change in the learning culture.

Please jump off from UoDEdushare to a one of almost 800 posts by our Teacher Education students to get a flavour of what is happening as a result of the changes that we have made.

PS: When our students graduate and head off in to their first years of teaching then their ePortfolio goes with them in Glow and if they leave Scotland (hopefully not :)) then they simply export their ePortfolio and import to WordPress outside of Glow. (In education in Scotland? Give Glow another look.)

10 thoughts on “Eportfolio: what happens when you change the platform and change the culture?”