Prior to studying discovering mathematics I believed maths to be only about numbers. However following the module, I now understand it is much more than that, it is everything and it is definitely an art form. Mathematics is prominent in many aspects of music such as beats in a bar , notation value ie crotchets and semi quavers etc, tempo and in tablature, the list is infinite.

This picture shows musical notation indicating pitch and so requires the guitarist to know where each note is represented on the guitar fret. However the bottom line is the tabs. Tablature tells the individual where to put their fingers so the first note would be open first string as it tells the reader no fingers on fret but to play open first string once, the second note would then be first finger first fret first string played once.

I used to believe those who played tablature to play music were much like artist whos work was made using dot to dot. I didn’t think it required much if any understanding of music. However I recently decided to try playing tab and I think it is possibly the best decision I have made in terms of my musical progression. I already had a conceptual understanding of music or so I believed I recently tried to learn hotel California on guitar however there are quite a lot of sharps and flats in the music and I was struggling to remember it all so I tried using tabs and found it be alot easier. I didn’t need to keep reminding myself where the sharps were as the notation told me where to put my fingers. I learnt to play the song reasonably quick after this I just needed to perfect the pace.  Which brings me to my next point; pacing.

A disadvantage of tablature is that because there is no notes without truly knowing the song or understanding the notation above it indicating the pitch you have no way of determining the speed of the song or the dynamics (how loud a note is played) . However, as I learned to play music before I did tablature I used the notations to help me determine the speed of the song. I also knew that by looking at the start of the music where it tells me how loud to play the song using something I believe could be defined as algebra. 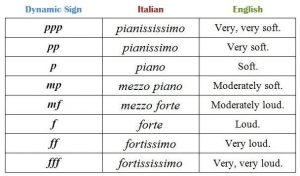 These letters represent more than just their face value they dictate a song massively (Angela ,2018). I believe that the understanding and appreciation of pupils learning about dynamics will increase their appreciation of the beauty of algebra.

So this begs the question so what?

I believe that by learning tablature my horizons have been broadened in terms of music as having an understanding of both tablature and notation I have developed a conceptual understanding of music, understanding not only the how but also the why of music. Learning music through the use of numbers have furthered my understanding of a mathematician and a musician and I would love for pupils in my future classes to have the opportunity to experience this and so I will to the best of my abilities ensure I teach maths and music together in hope that both experiences are enlightening and enjoyable for pupils.