Now, before you call me out based on the title, let me clarify this. Very obviously, all lives do matter. Whatever your race, ethnicity, religion, gender, sexual orientation, (dis)ability; Your life matters.

Then why is it so crucial that in times like these, we spread the message behind a simple hashtag #BlackLivesMatter, rather than promoting that we are all equal and every single one of us deserves to be treated the same?

This week in a workshop for module called Values we did a very interesting exercise. Being split into four groups and receiving each different amount of material, (my group being privileged enough to have sufficient resources to create a brilliant bag which earned us a, needless to say, not-so-deserved praise) we made it through to the message behind the whole task.

Whilst we should all be aware equity and equality aren’t the same thing and it is essential to distinguish them, especially in a setting like Primary School, with regards to recent events, it inevitably got me thinking of how “fairness vs. sameness” applies to current racial issues in the world (with a special emphasis on the U.S.).

It never fails to amaze me how ignorant people choose to be towards matters that do not affect them personally. Now, don’t get me wrong, I am not shaming white people, being of white race myself. It is about recognizing the privilege that comes along with your background, being aware of it and trying to contribute to reaching the same standards for all people around the world.

Thus, none of us have a right to react to the movement “Black Lives Matter” by pointing out how we all matter. As Viney defines, “Saying “Black Lives Matter” is neither separatist nor racist. It is not anti-white, and, contrary to what some in the media may say, it is definitely not anti-police. It does not denote, promote, or support hatred of or violence against any ethnic group.”

To apply the case of such an issue to the lesson we learnt on Tuesday, it is simply about realizing, identifying and highlighting the fact that people of colour do not start off with the same package as we – white race – do. Their rights, conditions, standards, opportunities… these are not equal to ours. And that is just not OK.

In other words, as The Southern Digest explains, “the purpose of the phrase “Black lives matter” is to promote awareness amongst the masses that several Blacks have been slaughtered at the hands of police.” Now, we don’t have anything along these lines happening to white people, do we?
If you find yourself still unsure as to why the difference between those two movements is so striking and significant, have a read of the most simplified comparison: 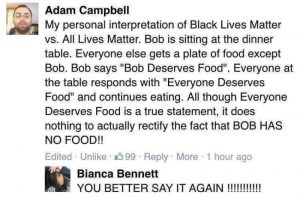 I know this is not necessarily the particular issue our lecturer was trying to highlight in the last lesson, but putting that experience together with what has been happening around us has left me thinking in this direction.

Thank you for reading this, however, I would recommend giving this article a read as my views are nowhere near as organized and properly formed as how it’s summed up there.

1 thought on “Why #BlackLivesMatter and not #AllLivesMatter”