Today I undertook the online Equality and Diversity training module and found it both engaging and enlightening, and it caused me to reflect on my own inherent biases/prejudices. The course itself included links to a wide variety of further reading and viewing to enhance this process. 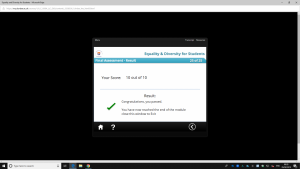 Although I believe this subject to be fundamentally important to society, it is also especially important for a trainee teacher like me who is expected to have Integrity, earn Trust and Respect through my commitment to Professional Development and Social Justice. This awareness (both of myself and wider legislation) is important right across the Standards from differentiation within the classroom to effective and emapathetic working with staff, parents and partner agencies to promote learning and wellbeing.

I found the issues explored this week were very closely aligned to my own passionate belief in equality and fairness. It is also very interesting to me personally as a mature student to note that that concepts around equality and fairness were regarded as in some way subversive or counter-cultural when I was growing up: “Gay” was a pejorative term, people of colour were routinely referred to in what would now be considered obscene language in polite company, and so on. Standard child rearing practice involved the constant threat of violence and use of one’s dialect was a punishable offence in school.

It may sound like I grew up in the Victorian era, but I am only 36 years old. I point this out only to reflect on how incredibly far we as a society have come in such a short space of time – it genuinely fills my heart with joy and hope for the future when I find what were somehow marginal concepts becoming accepted by the mainstream. The younger students in our year have grown up against a pluralist background where cultural/gender/ecological diversity is the norm, thanks in part to digital technology, and I believe it is beholden upon us all to not take this for granted and continue to strive for democracy and social justice.

I have always found that discrimination was basically about maintaining a social order which protected vested interests which were, to quote Diane Abbott, “male, pale and stale”. I felt growing up that I had very little franchise in this social order and quickly adopted counter cultural role models. I present here a VERY short list of some bands, movies etc that had a huge influence on my worldview not to show off my exquisite taste (!) but in the hopes that someone else may find these things interesting/inspirational. Oh, and remember, there was no google back then so these things were arrived at through scrutinising liner notes and books and speaking to actual people!

And, just to drop in something remotely up to date, watch the stunning Hulu’s Handmaid’s Tale, or go one better and read Margaret Atwood’s book!

As we seem to be heading in to some pretty dubious territory politically with the rise of the right and various populist movements I believe there is no room for complacency and it is our duty as teachers to nurture and promote these values and defend our hard-won freedoms. 😃

On reflection, I really enjoyed group 4’s Seminar with Gillian last Tuesday. I’m not sure I was enjoying it at the time though as I was in one of the under-resourced groups!!

The whole session was designed to subtly explore ideas around structural inequalities  and social justice which I felt it did extremely well. The lesson’s structure featured an element of misdirection where we were asked to focus on a creative task, but this element was altogether secondary to the ‘big reveal’ of the disparities in our resources and treatment. It was around 3/4 of the way through before the penny dropped for me…🙄

It was not only a great lesson in classroom management (ie don’t just focus on one subset/demographic as a teacher) but also elementary to extrapolate to a societal and global level. These ideas are also cast very movingly and unflinchingly in the Humans video from Week 2’s Learning Materials.

Being from a poorer (albeit Western) background myself this is a subject very close to my heart. Without wishing to labour the point, it has taken me 20 years longer to get to University than many of my classmates, largely because I started from a less privileged position. It still surprises me how some better off people can struggle to imagine and empathize with this fact.

Anyway, here’s a good video that explains that differential more succinctly and less personally/ranty than I can. 😄

…and this has been especially true of the last couple of weeks! As a (numerically) mature student  with no prior experience or family history of University life a new world has been revealed to me. Throughout my life I have worked in a variety of jobs, most recently 16 years as an outdoor educator.

My own experiences at school were a mixed bag. I’m not sure the teachers knew what to do with me. I was a disruptive wee schemie who in a prior generation would have been considered factory fodder. I was academically quite bright and achieved a decent fistful of Highers. In my youthful naivete I assumed this meant I could pursue my ambition of becoming a writer like Conan Doyle or Orwell, taking attic lodgings in Paris or Cambridge, living out my days pontificating and smoking a pipe whilst a nice old lady brought me cups of tea. Nae luck. Turns out that, if anything, I might get to make the tea.

My parents did not understand the concept or intricacies of Further Education (still don’t, bless ’em) and so I left home as I turned 17 and struck out on my own. The inequalities in our society were starkly apparent to me then and an instinctive sense of social justice developed. Various pop culture and political figures became my role models as I tried to lead a worthwhile, compassionate life. This fed my interest in the environmental movement and issues around sustainability, setting me on a course to becoming a Countryside Ranger which has been an enormously fulfilling career. I have been lucky enough to work with a vast range of people from all walks of life and from all over the world who have influenced me in a great many ways. I also discovered that I possess the qualities of a good leader and have the potential to be a great teacher.

Sadly, I don’t have any tales of inspirational teachers who prompted an epiphany regarding my life’s work; rather each day and every experience has incrementally made me the person I am. Observation of and reflecting on my experiences and the examples of behaviour and lifestyle of people I have encountered along the way have helped me reach this point where I can say that I am worthwhile. I have something constructive to offer. I am as good as anyone else and hope that I can set a positive example for and inspire young people to strive to reach their full potential and lead a happy life. :oD