When I think of ways to describe Maths, creative definetly does not appear on the list or anywhere near it.  The common perception of Maths is long, difficult equations, hard to understand problems and a few questions involving graphs. Overall, it is something quite dreary and dull. However, Maths can be a creative subject that students can can have fun and be engaged with.

Every time I think of Maths lessons at school, the first memory is sitting at my desk and working through multiple problems trying to find the one solution – all so I could pass one final exam at the end of the year. The closest to doing something ‘creative’ on the course was drawing a graph – which for the most part, is not something fun to draw. As previously mentioned, most people will not consider Maths as being creative yet the Scottish Government expect this attribute to be developed within the classroom (Scottish Government, n.d.). It is important that children can see that this subject can be fun as this will hopefully make it appear less grey and boring.

During an input in Discovering Maths, we were discussing tessellations, “a pattern made by repeatedly fitting together without gas a collection of identical tiles” (Haylock and Manning, 2014), which is maths and is creative – combining the two unlikely things. The “basic idea” (Ma, 1999) that is at the centre of tessellations is 2D shapes. Children can learn about the types of triangles, quadrilaterals and building up to a variety of polygons  (e.g. hexagon, octagon and nonagon) – regular and irregular. It is from learning these shapes that children can learn which of these shapes tessellate and which do not. This gets them exploring 2D shapes and seeing if they can make a continuing pattern – this exploration stimulates their curiosity and appears less terrifying than other aspect of maths. Another benefit of tessellations is that they in the wider world – so children can begin looking for them, possibly with parents or guardians.

Digital Root Circles are another creative activity that can be done with pupils. A digital root is “the result of finding the digital sum of the digital sum of a natural number” (Haylock and Manning, 2014) until it has become a single number. For example;

So the number 6 is the digital root. This can be done with all the times tables which creates a pattern. The following circles are examples I have done from finding out the digital root: 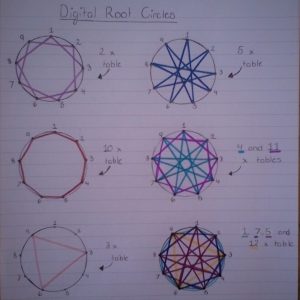 Overall, Maths has the capability of being creative and can make children think it is intriguing to learn about. By doing more activities like this then can hopefully improve the outlook on Maths and encourage students to ‘give it a go’.

1 thought on “Maths Being Creative?”