Throughout the discovering mathematics module I’ve learnt a lot about how maths is all around us disguised in our daily routines. Most recently, I was amazed just how much maths is in time but not in a way you would normally think. We are all fully aware that part of the curriculum for maths is teaching time. However, it is claimed that mathematics began through the study of time, particularly when it came to recording sequences of events. For example, understanding the seasons is essential if you are to successfully grow crops. You need to consider the right time to plant the crops, when the rain will come, when the rivers will flood, when you should harvest the crops. Knowing the length of the year was of vital importance, yet much less visible from the timekeepers in the sky (daily passage of the sun and monthly phases of the moon), leading to calculation where maths links in. It then became necessary to count days and months which lead to the creation of calendars. The earliest evidence of timekeeping dates right back to 20,000 years. The evidence of this comes from markings discovered on bones and sticks, for example, the Ishango bone.

Back in the day, it was extremely important for the Egyptians to know when the Nile would flood. Therefore, this played a huge role in how and why their calendar developed starting from the earliest version of roughly 4500 BC which was based on months. 4236 BC saw the beginning of the year as the helical rising of Sirius, the brightest star in the sky. This helical rising was seen to be the first appearance of the star after there being a period where it was too close to the sun for it to be seen. This occurred in what is now our July, which was said to be the start of the year. Not too long after this, the Nile flooded making it a very natural beginning to the year! Therefore, the helical rising of Sirius would be a signal for people to prepare for the flood. This year was calculated to be 365 days (as it is today) and by 2776 BC it was known to this degree of accuracy. Consequently, a calendar of 365 days was created in order to record dates. However, a later more accurate calculation of 365¼ days was worked out for the length of the year but the calendar was not changed. Interestingly, the 2 calendars ran in parallel, the one being used for the practical purposes (i.e. sowing crops, harvesting crops etc.) was based on the lunar month.

In the modern world, units of time require some way of measurement,one of the earliest devices used to measure time involved the sun. 3500 BC saw the gnomon being used which consisted of a vertical stick, using the shadow to indicate the time of day. 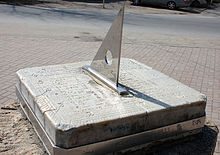 Further along the line in 1500 BC, the sundial was used. The problem with the sundial being that the sun took a different path through the sky throughout the year. To ensure the sundial would roughly produce the correct time all the year round it had to be set at exactly the correct angle. 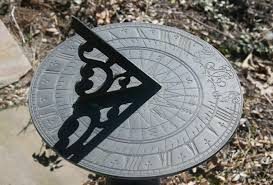 Around 300 BC the hemispherical sundial was introduced to develop the sundial into a more accurate instrument. Just before the rise 27 BC,  Roman architect Vitruvius was able to describe 13 different designs of the sundial in his book.

But what happened at night? As the sun will have gone down! As the sun couldn’t be used to tell the time at night, water clocks were used in 1500 BC. Water would run out through a hole in the bottom of a vessel, the inside of this vessel had lines to indicate passage of time. Earlier versions didn’t consider the fact that water ran out more slowly when the pressure dropped. Additionally, sand was used and still is in the familiar hour glass in which sand trickles from a container, taking a certain length of time to run out. 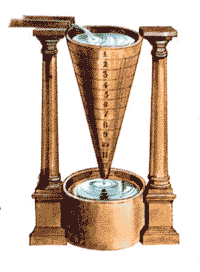 So is it maths that is in time or time that is maths? Who knows! But one thing we know for sure is that time played a very important part in the beginnings of mathematical understanding as we know it. To refer back to Ma’s PUFM and the 4 interrelated properties, this particular post involves longitudinal coherence. When teaching time we tend to just jump straight into how to tell the time on a modern day clock, however, the history of time can be used to lay foundations for when they go on to learn history but also not limiting the knowledge learnt to just the curriculum and taking into account the subject as a whole. Additionally, connectedness can be found here as I made a connection to a previous post about prehistoric mathematics, linking the mathematical concepts. When teaching, it is important to make learners see the connections in their learning to ensure it doesn’t become fragmented and to reinforce previous learning. Overall, I have gained a lot from this module about just how vast maths is and it has opened my eyes to just how limited the maths taught in school is, leaving out all the fun and exciting parts. One of the things I believe to be very important when teaching maths is relevance. So often we see children disengaged in maths because it is not “relevant to their lives”, that is why it’s so important that we shed light on this issue and make sure we make connections to the real world whenever we teach maths. Taking this on board to the future with my teaching, I aim to ensure that all learners see the connections between mathematical concepts in the world, to show them just how fun maths can be and how it interlinks to just about every subject! By doing this, I hope to banish ‘maths anxiety’ and share my love for maths.