Over the course of the module so far we have been exploring the benefits of technology within the classroom.  Although their is endless amounts of benefits we must also be mindful of the dangers of children being online and thus we focused on this during today’s input.

During this class we were given the task of creating an I-movie that highlights the dangers that children can face online. This is something that I have been very apprehensive about facing in the classroom environment, this is such a prevalent issue in today society so it is so important to voice the correct information in a way that children will be able to understand and relate to without restricting them from social medias and technology as a whole. My opinion is supported by the quote “…E-safety is not about restricting children, but about educating them” (Beauchamp, 2012, p.58). My group began planning for this lesson plan by creating  a story board/written plan which outlined our story plan, main characters and the setting. My group and I decided to focus our story on the use of Snapchat,  the importance of not accepting strangers and never sharing personal information. Our story followed Sophie who is a primary school pupil who receives a friend request from a stranger named Harry on Snapchat.  We decided to focus on Snapchat as it is an app that children are using on a daily basis from an extremely young age. This app allows anyone to add you and their is also a feature which is called the snap map, which allows any friend to see your location down to the street. This is extremely dangerous when in the wrong hands and it allows anyone to track a child’s location so it is so important for them to understand this danger. We see Sophie debating whether to add this person  or not however she eventually does. They begin to chat and we soon find out that Sophie had shared her Snapchat details on her Instagram which was not private. This was another area we felt was important to focus on as anyone can view your Instagram if it is not fully on private. Harry is claiming to be a person who went to her school but is now in high school and he is using pictures from google to send to Sophie to convince her he is real. After the two had been speaking for a while Harry asked Sophie to meet and she agreed. Harry then asks Sophie to not tell anyone about the two of them meeting and Sophie begins to feel like something could be wrong. She texts her friend Jodie and asks for her advice, Jodie tells her to never meet someone you don’t know and that she has to tell her mum because Harry could be anyone. Sophie does what Jodie has advised and tells her mum, she then shows her mum the messages and her mum saves some as proof. She then blocks Harry from Snapchat. At the end of the I-movie we decided to put in a series of questions and steps to being safe such as; 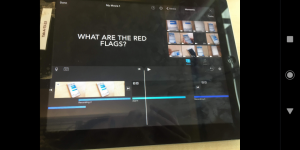 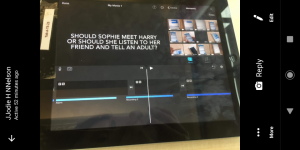 The Experiences and Outcomes that we focused on in this activity were;

I can extend my knowledge of how to use digital technology to communicate with others and I am aware of ways to keep safe and secure. TCH 1-03a

Internet safety within schools is core to the children’s welfare, they must fully understand the dangers they could face online and the ways in which to avoid these dangers and what to do if something does go wrong (like in the story above). Beauchamp further this point when  stating that “The most successful schools… in terms of e-safety ensured that pupils knew what to do when things went wrong” (Beauchamp, 2012, p.60). In such a digitally immersed society it is the place of the educators to give the children the information they need to be able to be responsible citizens online and to have the confidence to know if what is happening is wrong and how to report it. Websites such as ThinkUKnow and programmes within such as Hectors world are also great ways of helping children to understand the dangers online, they express the information in a child friendly manner and the Hectors world animation is something the children will be able to enjoy watching while learning. These are two programmes I will most definitely be integrating into my classrooms internet safety lessons.

Overall, this lesson taught me vital information about the internet safety and the ways in which to teach it within the classroom. I am now more equipped to be able to take such lessons and plan to do so using quizzes, hectors world and short films as well as discussions. It also helped me to become more familiar with the I-movie app which I found very easy to use, however I did find it took a long time to select each video or photo clip we used.  In the classroom environment I will be sure to remember that it is my job to educate the children on how to be safe online and how to deal with the possible situations rather than steering them away from social media. I now recognise that it is important to teach them how to act if they are confronted with scenarios as opposed to encouraging them to avoid the possibility altogether.