I believe it is necessary to delve deeper and to unpick the framework of the Primary Years Programme at the International School of Stuttgart in order for a better understanding of the International Baccalaureate curriculum and the school of ISS. Therefore, I think it is best to create a blog post that centres around this exploration of the curriculum that is taught at ISS and to unravel the history behind the IB pathway in education. Not only this, but I hope to examine the underlying school ethos that is established at ISS through the PYP.

“Aims and aspirations are translated into a curriculum that is structured from the earliest years around a Programme of Inquiry that contains formal ‘units of inquiry’ in each year. In the early years (aged 3–5 years) the children are required to engage in at least three units of inquiry a year. After this they must engage in six units of inquiry under each of six broad transdisciplinary themes namely: Who we are; Where we are in place and time; How we express ourselves; How the world works; How we organise ourselves; and Sharing the planet.” (Bacon and Matthews, 2014, p.356) – an interesting take on the International Baccalaureate’s system of inquiry-based learning, something that I have also unpicked in another blog post that examined this phenomenon of inquiry-based learning.

The concept of “units of Inquiry” was very alien to me at the beginning of my placement. However, even from the first week, I soon realised the massive importance they have for learning – not just for the teachers teaching the curriculum but for the children that are experiencing and doing the learning. I particularly found that most of the kids at ISS love it when it is UOI time, no matter the grade level. Within the timetable, UOI is a prominent feature amongst the homeroom times, specialist lessons and recesses and break times that the children have on any given day. Across the entire year, students will explore various topics in a great amount of depth, whilst also tapping into other areas of the curriculum in order to establish a cross-curricular model that fully encompasses all areas of learning that can occur. Whilst talking with the grade 3s, I found they had already completed inquiry topics this year on ancient civilisations, how the brain works, space and living things. They are now moving on to preparing for a show where they will all have a role in acting or production. I couldn’t believe the breadth of knowledge that the children were given in terms of exploration for knowledge. However, this is very normal for international schools that follow the PYP.

Using Atlas Rubicon, we can see the Grade 3s progression of UOI Topics as they work through the year.

The Scottish Curriculum for Excellence (CfE) is far more rigid in the sense that set times are normally the case for most primary teachers. They know they are doing maths at a specific time on specific days every week, with only minor changes to the routine. Lots of initiatives however are pushing for CfE to be a flagship for the similar practices found in the IB methods – transdisciplinary skills, cross-curricular and interdisciplinary learning links and having mindfulness of the wider world in everything we do. We can see this with the four key purposes in the Scottish education system CfE – successful learners, confident individuals, responsible citizens and effective contributors.

Now, the International Baccalaureate offers more than just the Primary Years Programme, it covers education from 3 all the way up to 19, with Middle Years, Diploma and Career-related programmes also being offered to students. 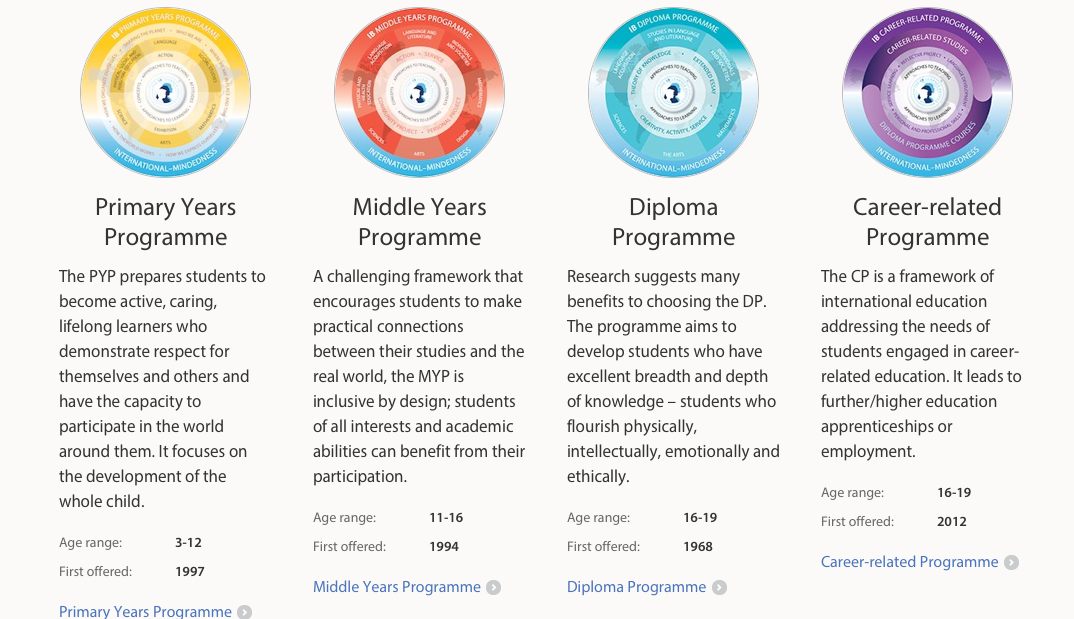 The different programmes offered by the International Baccalaureate within international schools – sourced from http://www.ibo.org/en/programmes/

Although it is handy to know where students will progress to, my main focus will be on the Primary Years Programme, as this is the level that I will be working with as a future primary school teacher.

It was first offered in 1997 after much deliberation was conducted in the early 1990s around the offering of a curriculum that was suited for students aged 3 – 12. Today, we can see that the curriculum itself is centred around the connection of 6 transdisciplinary themes: 1. who we are 2. where we are in place and time 3. how we express ourselves 4. how the world works 5. how we organise ourselves 6. sharing the planet (International Baccalaureate, 2017). These themes are interwoven and correlate towards creating “knowledgeable and caring young people who help to create a better and more peaceful world through intercultural understanding and respect” (International Baccalaureate, 2017, p.2). But what does this mean in a literal context? From what I’ve witnessed at ISS, I can say that it is children, adults, staff members and students alike being open amongst one another – it is going beyond the idea that education is the transmission of knowledge. There is a real connection amongst the people that call ISS their home for however long that they are there for – and even beyond this with alumni students being welcomed with open arms at the school during my time here. Staff members interacted with particular former students as if they were nieces and nephews, showing that real connections are formed between student and teacher.

My take on the dynamics that are clear in the Primary Years Programme at the International School of Stuttgart (and I assume many of the other international schools that offer the IB PYP) is that, because everyone is predominately from different backgrounds from one another, they feel united through their differences. These differences come together to create a learning space that cares a lot about achieving individual goals whilst also establishing a space that people can come together in unity to be there for one another in a wider sense, which is emphasised in Attitudes and Action in the PYP that are there to empower students within their experiences of learning. Within these experiences is a wide array of topics that can be covered through units of inquiry and other topics in the curriculum with their homeroom teacher or specialist teachers.

Something that I really liked that emphasised this entire school ethos was during another assembly where students that were leaving to start school abroad received a farewell song from the staff and students. It was an emotional day for many because there were students that were moving to far away countries to start a whole new life.

Overall, there is a big difference in the curriculums between international schools and the curriculum used by many schools across Scotland. However, we can see that a lot of the ideologies are stemmed from the same roots. Furthermore, much of the same pedagogical understanding was used to form both curriculums. Looking at both systems with a critical lens that has been able to experience both in practice has allowed me to really look internally and question my personal and professionals beliefs on education as a whole. A lot of the practices that I’ve seen at ISS have been very different and others have been very similar to ones that I have used myself. However, the biggest thing I will be taking away from the framework of the Primary Years Programme is the Units of Inquiry, as these core subject areas allow for a lot of independence and development of a child as a whole, and it also indicates to me that learning MUST come from the children themselves.

International Baccalaureate (2017) The History of the IB. [Pdf] Available at: http://www.ibo.org/globalassets/digital-tookit/presentations/1711-presentation-history-of-the-ib-en.pdf (Accessed: 1 April 2018)