Wednesday was my last day at ISS and it has been an emotional rollercoaster this final week.

Monday and Tuesday were the last full days in school where the students could work on their exhibition because Wednesday would be the night where they showcased all the learning they have conducted over the 7 weeks that has all lead up to this moment. 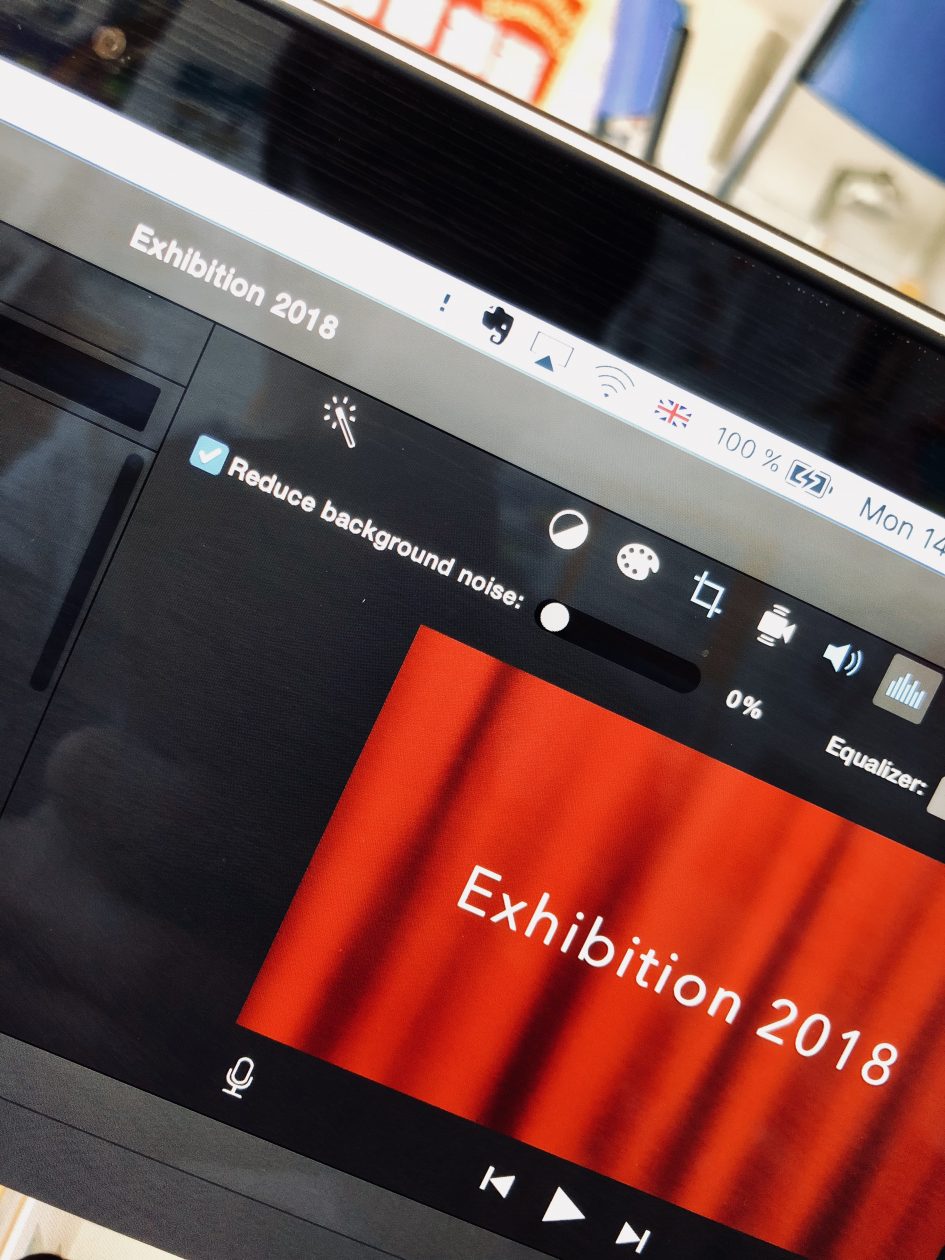 Usage of Technology – I was tasked with recording some students talking about their exhibition experience and then editing it all together in iMovie to present it at the beginning of the Exhibition Evening on Wednesday.

Tuesday was then time to get the students practising in front of an audience – their classmates and teachers. We got some volunteers that wanted to go first to get an almost dress rehearsal of what their exhibition would be like Wednesday evening, as each student was assigned a classroom in which they would present in front of their parents and their mentors (who would be assessing their performance through observations of their presentation). It was great for me to see all the presentations in their almost-final state because on the night I would only get the chance to see the other students that were in the same room as the son of my host family (there were normally 3-to-4 students per room). This method of practising also got the students receiving feedback from their peers; what was successful in their presentation and what did they need to work on in order to perfect their display of learning.

Amongst all of this exhibition chaos, the teachers and I were planning towards the next topic of work once the exhibition is concluded.

Wednesday night saw the exhibition commence in the AULA (the same ginormous assembly hall that was used on the multicultural evening and the assemblies throughout the year) where the Lower School Principal introduced the purpose of the evening. He gave a compelling speech that really interlinked with the core learning that I have gained from this placement: teaching and learning is constantly evolving. “Knowledge is everywhere. It is no longer just for the elite in society… For teachers, lecturers or scholars… Teaching has had a drastic change in the past 25 years to link with the world in which we live in today”. He also gave a strong analogy of what it would be like if a teacher from the 1950s had been transported to the night of the exhibition and saw all of the research and learning that the children in Grade 5 had conducted. It would be startling for them.

Then, I was starstruck by what came next.

The same goodbye song that I had heard in my first week at the school for the students that were leaving was now being performed for me:

“So long, its been good to know ya, but you’ve got to be moving along”

I was then gifted with International School of Stuttgart T-shirts to show that I am now a strong part of the school. All of the teachers have told me that I need to come back in the future and I really feel a part of the community at ISS, much as the same way some of the alumni students that have returned on a few occasions; the doors are always open at ISS for those that have been a part of it in whatever shape or form that has emphasised the school’s internationality. 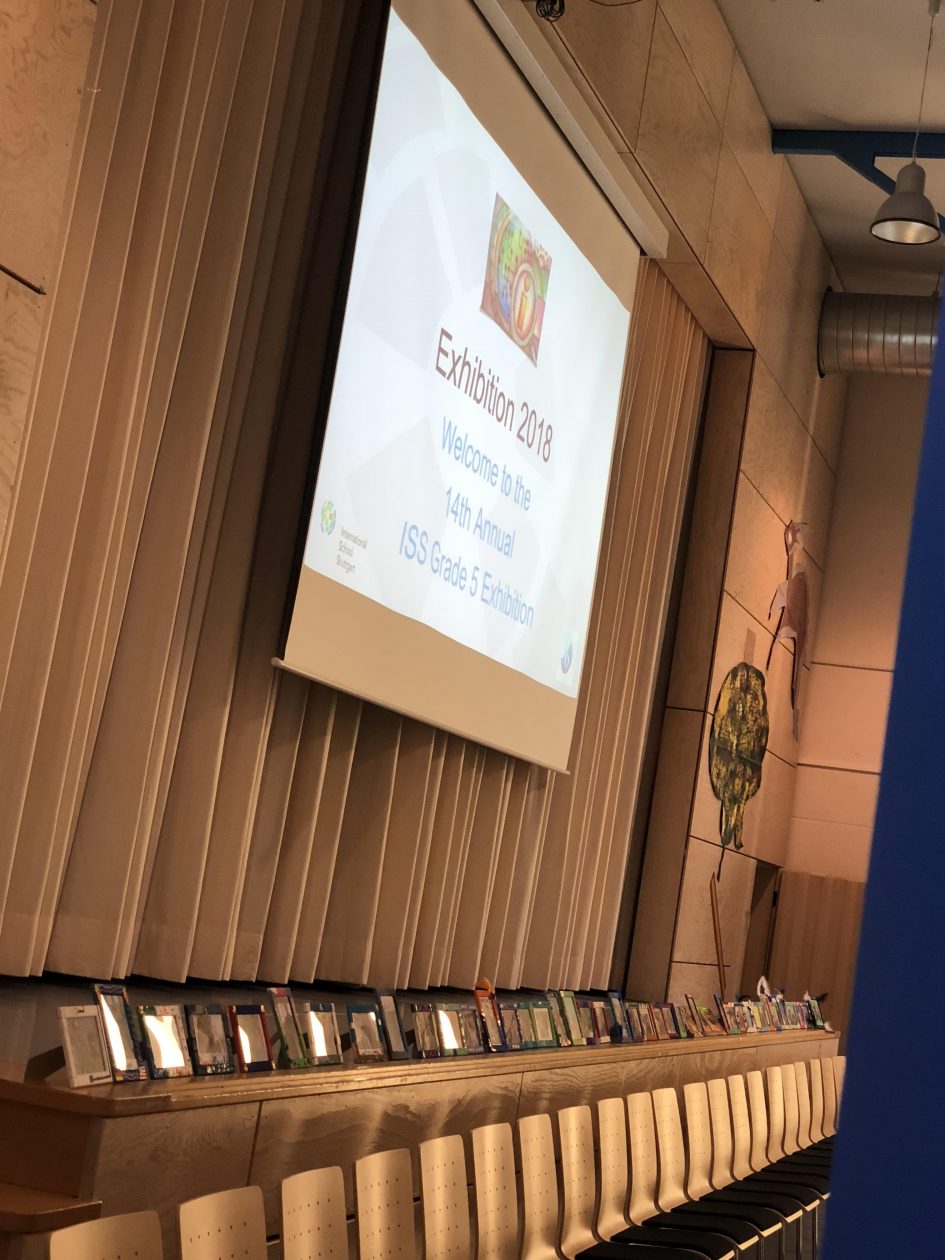 The Entrance to the AULA – the frames on stage were another project the children did during their specialist art time. It is an exhibition tradition that the students create a decorated frame that includes a photo of them with their mentor. This is then presented to the mentor as a special thank you for all their support during the process. Many teachers have amassed a collection of frames over the years.

Once the introductory presentation had concluded (my exhibition reflection video was also played), the lower school co-ordinator announced there was a change to the programme of events that evening. A few students had approached him during the school day to ask if they could perform a song that they had composed themselves during their music lesson that day. The lower school co-ordinator said it best: “why not? This shows the students are being real risk -takers”

Reflective, open-minded, risk-takers, caring, principled, balanced, knowledgable, inquirers, communicators and thinkers – these are all the attributes within the learner profile. 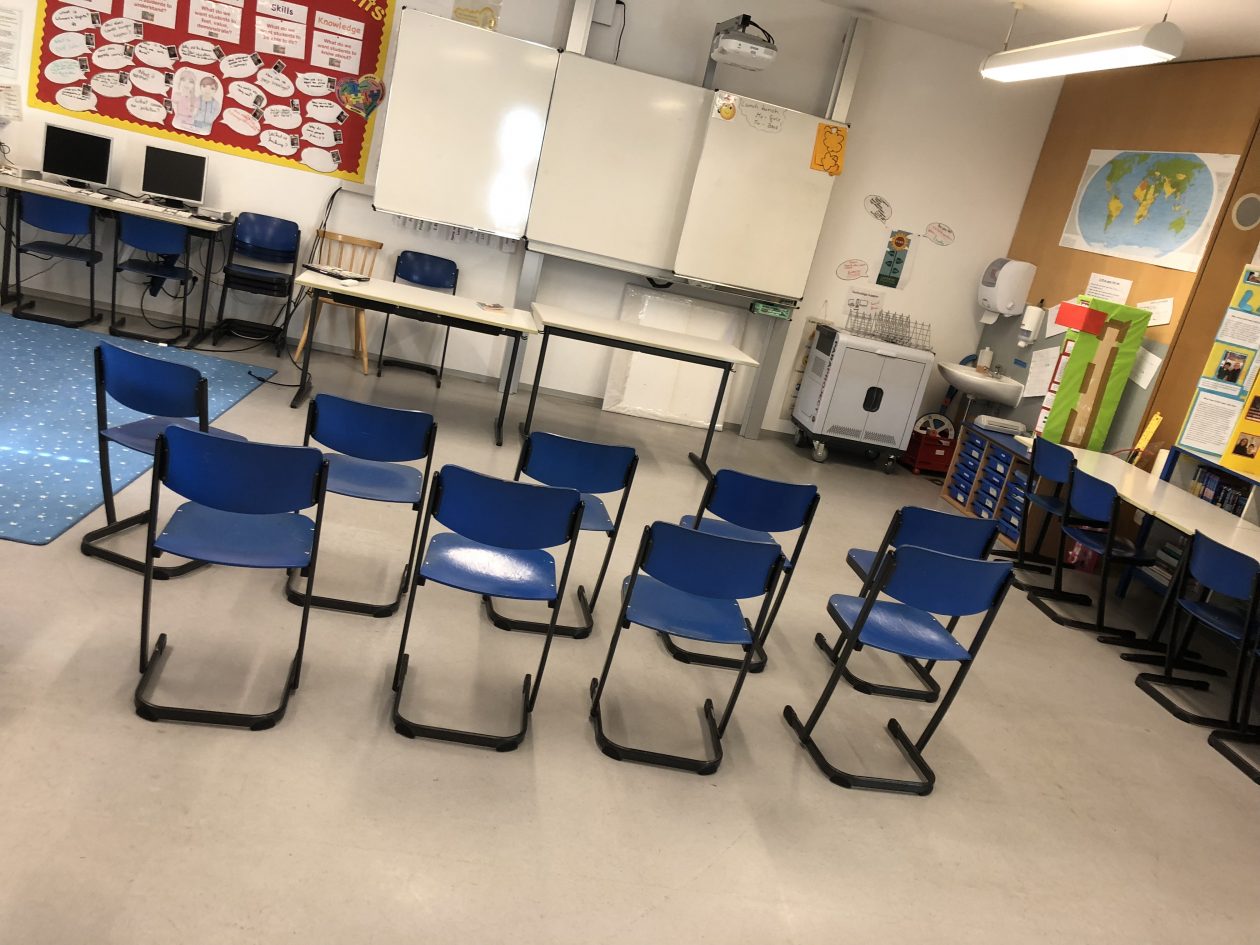 The Stage is Ready – an example of one of the classrooms being set up for the exhibition presentations. The students placed all their work on the tables provided at the front – i.e. the books they used for research, their display boards, their artwork and anything else they wanted to display that was centred around their topic.

These students performed the song on the stage and then the parents were told to head to the rooms where their children had been preparing for their presentations.

Once the presentations were complete and all the questions were asked, the parents and mentors got a chance to partake in an “open-house” scenario where all the doors were opened and people could walk around and see all of the topics and ask more questions to all of the grade 5 students. They would not be required to present again, however, this opportunity allowed for them to really show their learning in a more relaxed manner after a somewhat stressful presentation beforehand. It was amazing to see the joy around the rooms – it was over, all the determination and conviction to succeed had been fulfilled that night.

I said my goodbyes to all of the staff members and parents that I had become acquainted with during my time at ISS and I was once again reminded that, if I ever needed anything, the team at ISS were only an email away.

We drove back home on a high that night; the youngest son was elated that all his hard work had come all together for his excellent presentation in his third language of English (which, he had only been studying now for just over 6 months) and I was somewhat content with the fact that it was my last day at the school. It did not feel like a final goodbye, however. I know that the staff at ISS and the students too would welcome me back with open arms if the chance ever arrises in the future of my professional career.

Overall, I look upon this final weekly reflection with a sense of wonderment. Where has the time gone? It has went by so quickly and yet, I cannot remember my former self at the same time. I have gained so much personally and professionally both from ISS and the day-to-day ongoings of my host family.

I really have accomplished what I set out to do and that was to: 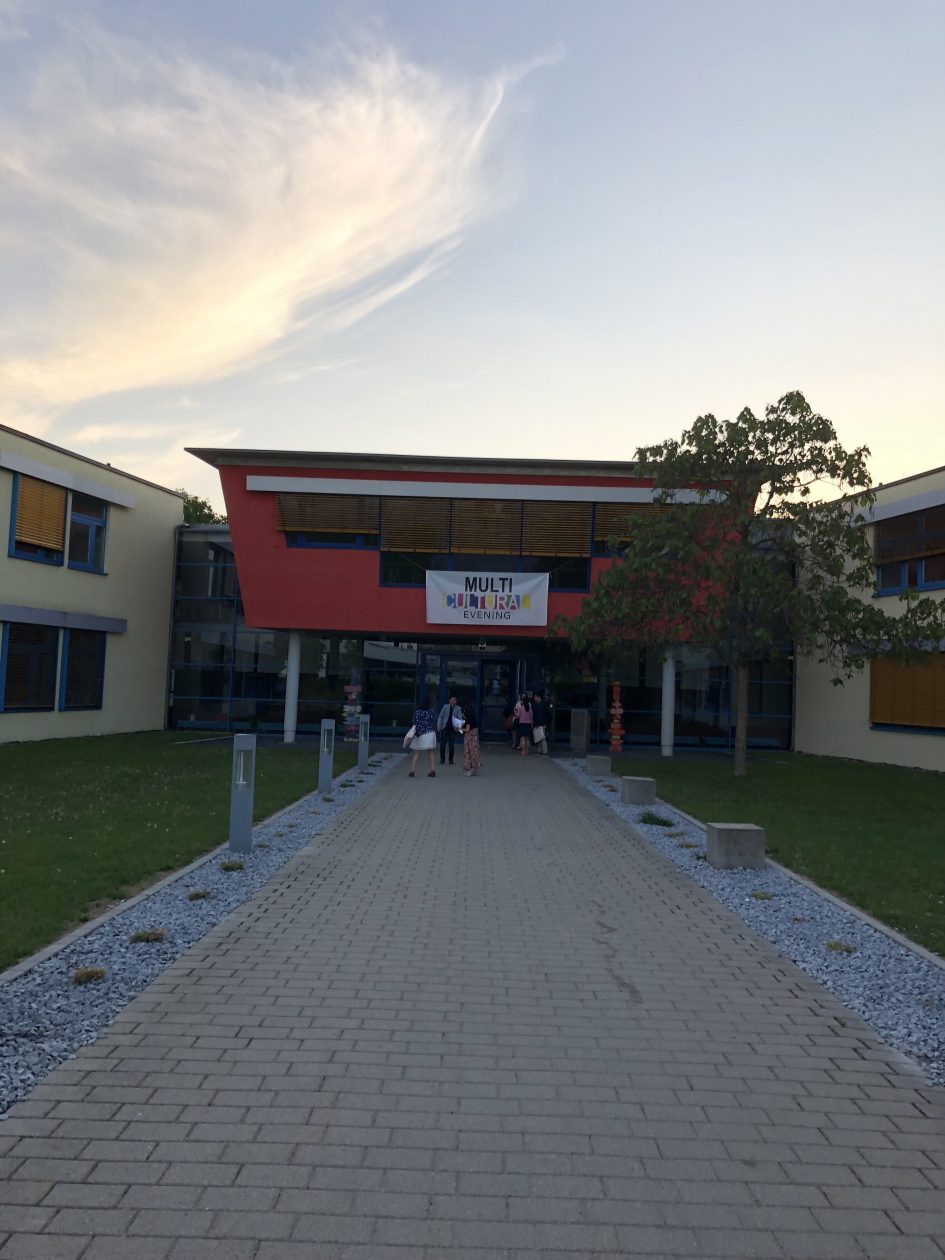 Goodbye ISS! – I had to take one final photo of the front of the school as we were leaving the exhibition evening.

I can now share my opinions more confidently, partly because I now have a more structure opinion surrounding education with this experience, and I feel as though I will take more risks and be confident about those risks. If someone had told me I have: survived an entire week alone in Germany, driven over 2000 miles across “Autobahnen und Straßen”, taught across all levels in an international school environment and have experienced cultures of Germany including seeing historical sights, taking public transport and partaking in the beer festivals festivities I would have laughed. These are only snippets of what I have accomplished and I am glad I have this blog as documentation for the learning I have done.

It has been amazing.