On Friday (4th of May 2018), ISS held its yearly event known as the Multi-Cultural Evening. I had been waiting for this day with anticipated joy because so many people had told me in the run up to it that it was a night that could not be missed at ISS!

What the multi-cultural evening is meant to represent is that the International School of Stuttgart is, as it is appropriately named, an international environment that celebrates its differences on an equal playing field. It is also a reminder to all the students that are part of ISS that they can both celebrate themselves and their peers.

There is a seat at the table for everyone. 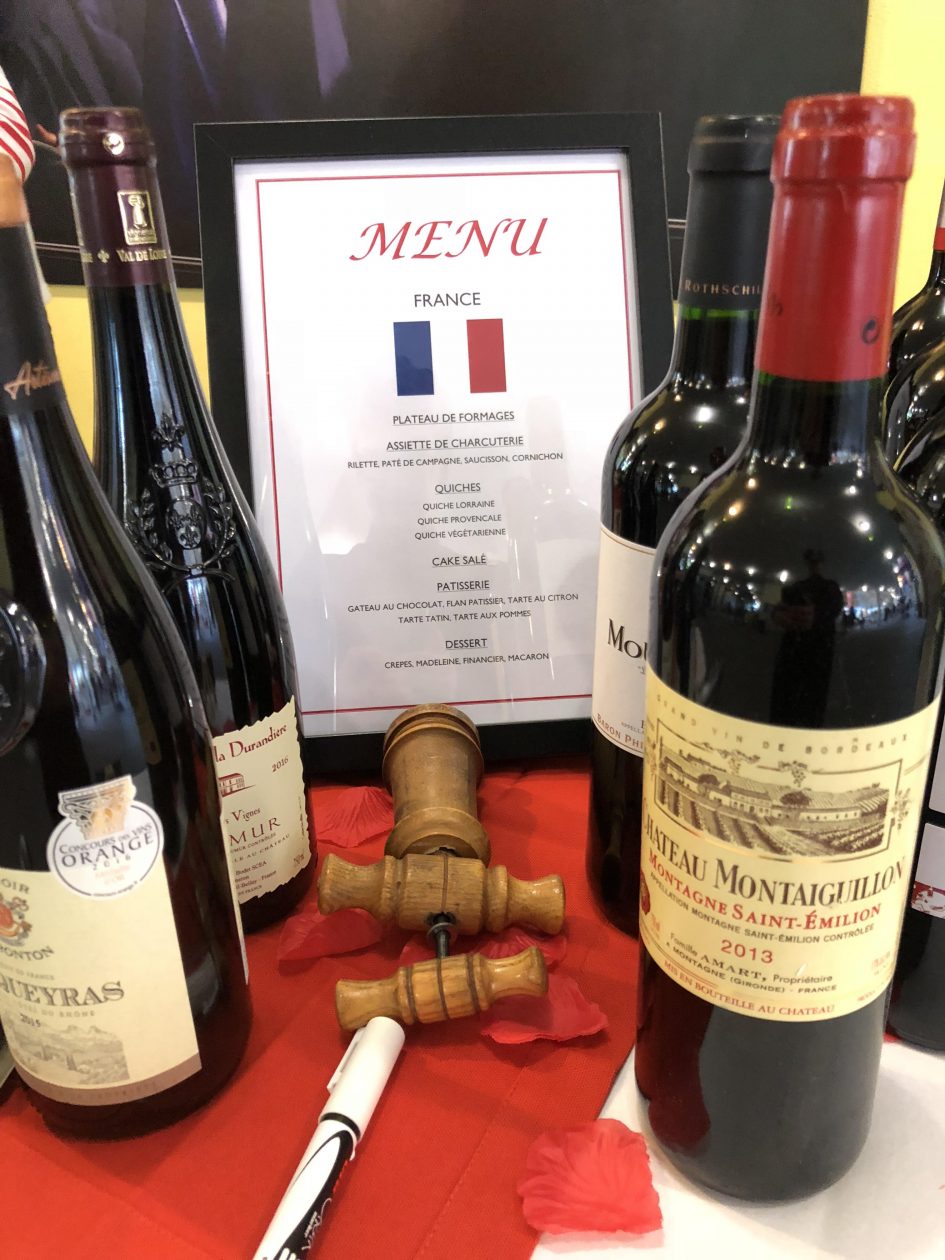 The night began with the school’s jazz band playing the many guests, students and staff into the large assembly hall called the Aula (assembly hall) and then we were all welcomed by the school’s director, Tim Kelley, who started with a profound speech that gave the mission statement of the entire night as a whole: “This is what the world looks like and this is what we want the world to feel like. To be inclusive of all and to be able to celebrate all our differences together”. The message really lasted with me because it is the core essence that I have felt whilst being at the school for these past 2 months. Everyone, no matter their background, is encompassing of one another and we rejoice in our practice through the similarities and differences in languages, cultures and nationalities. I even believe that, because we get to celebrate the other cultures of our peers, we then begin to really have a bigger reflection on our own cultures. This placement has made me proud to be Scottish and to hold onto my traditions and be able to show them to the world in an environment where everyone is equal in merit.

The lower school children took part in a parade to show the different countries that they were from. There were children from Brazil, Cambodia, Croatia, France, Germany, UK, Sweden, America, Russia, Turkey and so many more. Internationality is interwoven into the community of the school; people from around the world are part of this community of globalism and ISS has a responsibility to ensure that that community is welcoming.

This year had a slight change from the previous years in that there was now a competition for who had the best decorated table (each country gets to host a table where they display their traditions and prepare food from their home country for people to try) amongst the participating countries that had prepared their traditional delicacies. India was crowned the winner and rightfully so; not only was their table decorated in Indian art, but they themselves came in the most beautiful traditional attire in so many different variations of colours and embroidered designs. 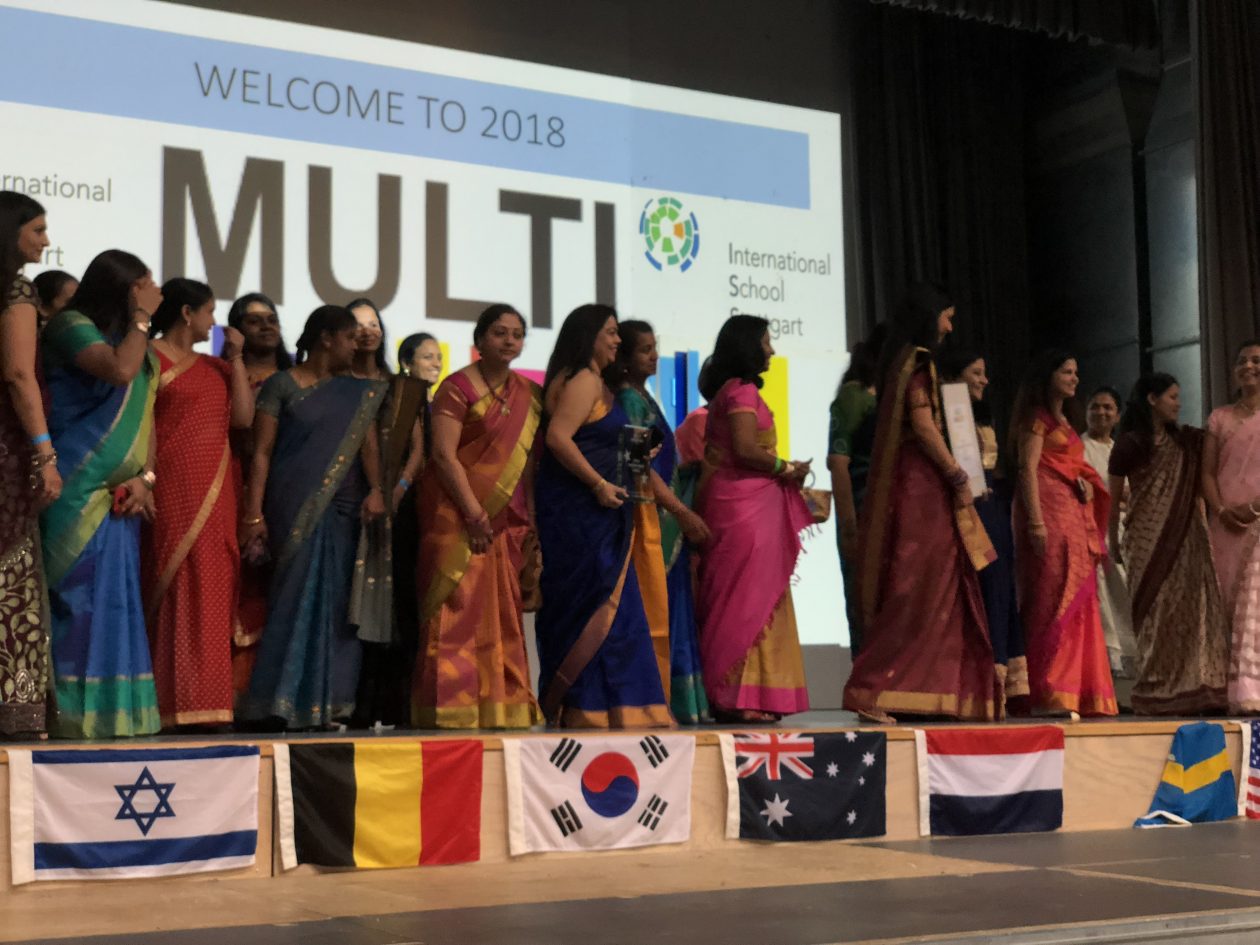 The Winners of the Night – Some of the Indian community of the school onstage accepting their award. They were not the only ones that had came in the most exquisite traditional garments. Once again, I had wished I had packed my kilt!

I stuck with a few teachers that I have really made great friendships with during my time here because they told me the best route to take to get to the most popular tables first! It was a great laugh to not only be socialising with teachers that were from all across the world, but also to feel like we were in Japan, Croatia, Italy and France for the night with all the amazing stalls that were set up.

The Japanese table was first and then the Indian. We strategically went to these tables in the beginning as there are normally queues. There were so many different types of freshly prepared sushi, edamame soy beans, pork meatballs (tsukune) amongst the decorations of pikachu, dragons and kimonos. The Japanese community were very accommodating in telling us about the food that was on offer as were the Indian community in their traditional attire.

Making our way around the tables, we also saw many different examples of cultures beyond food. One in particular was on the Turkish table where the practice of Ebru art was being shown to the children and they were getting to participate in the art themselves. The Turkish Cultural Organisation (2018) explains that this form of art is paint is submerged in an oil-like substance to refrain from the paints mixing, which allows for patterns and shapes to be made with tools. Once a pattern is made, it can then be transferred onto paper and the whole process can start once again with the oily chemicals. 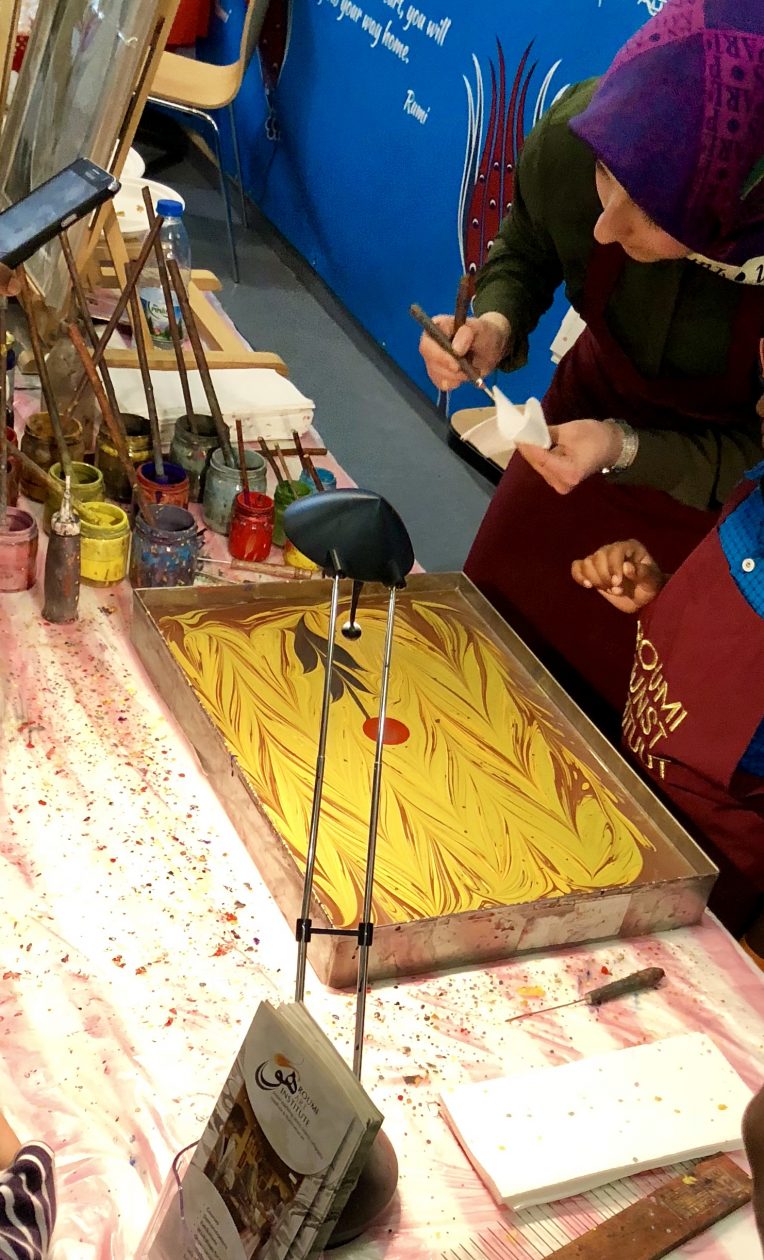 The Technique of Ebru – The children got to try their hand in the art that is created through creating colourful patterns on a pan of oily water and then transferring the creation onto paper to finalise the art. 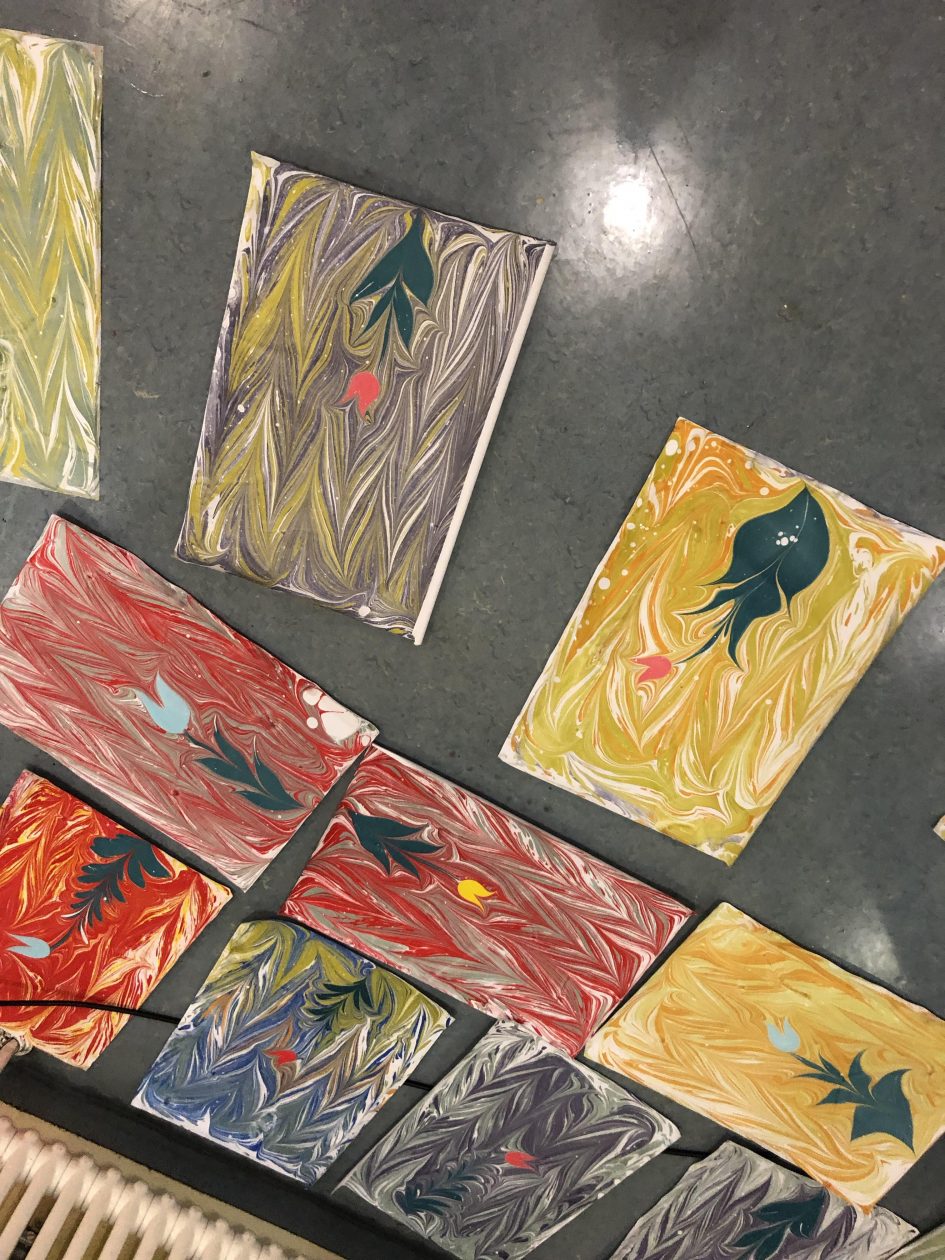 Culture Extends Beyond Delicacies – examples of the finished pieces that had been transferred onto paper. It was really an art of patience and a steady hand that was able to create these masterpieces of Turkish heritage.

Whilst people were making their way around the food, the Aula was hosting different performances that were announced over the school’s speakers to say a particular traditional art was being performed. It was perfectly timed that the professional Turkish dancers began to perform when we had made our way back to the hall. 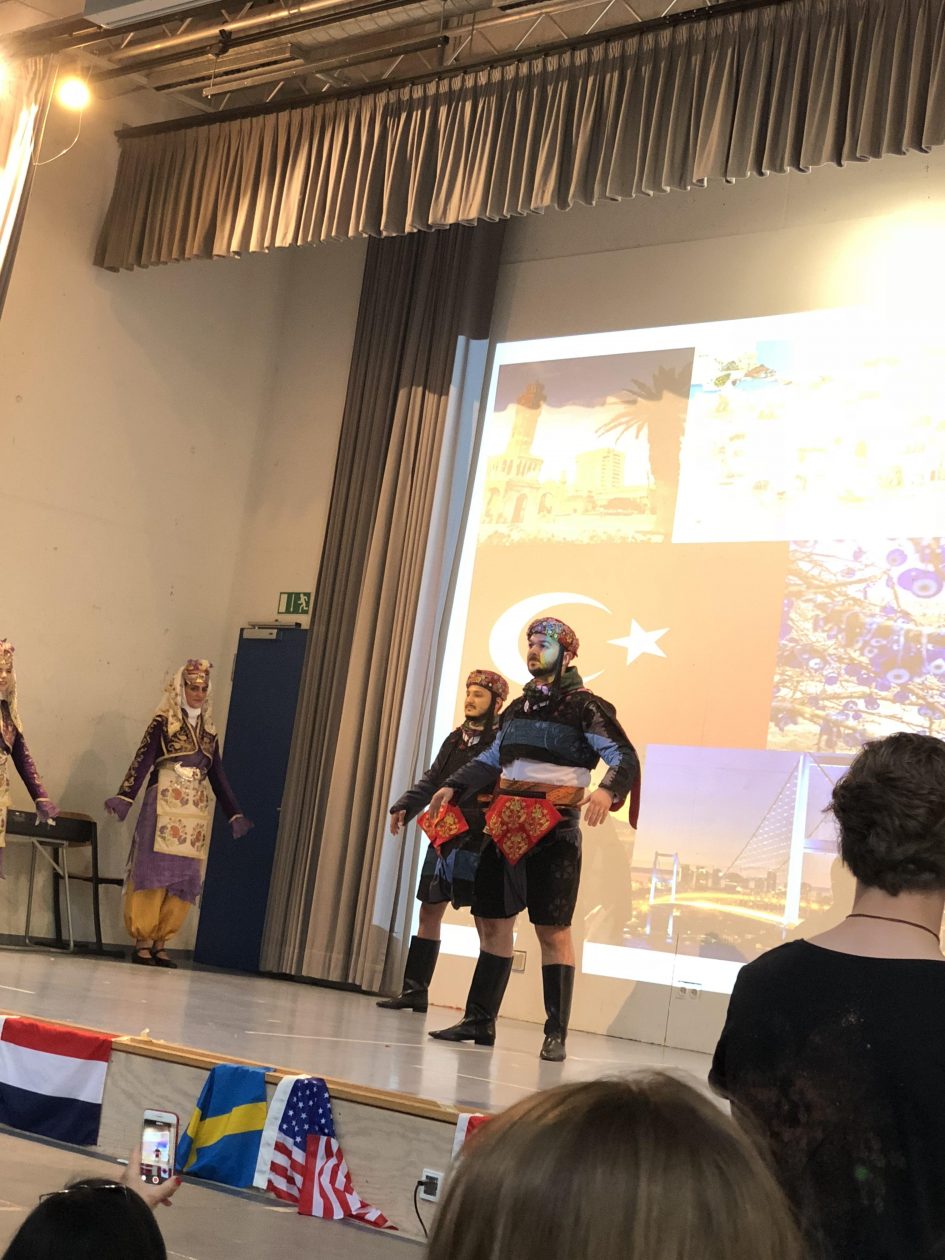 From what I’ve looked up on the internet, the Turkish dance that was performed was a “Zeybek”

There were also kung fu performances from the students that were from China and they got to show the audience their masterings in the martial arts that is famous from their home country. Cheerleading, african dance, flamenco dances and many more performances were put on by the ISS family and they were all spectacular in their own right. I felt very proud for many of the students that got up and presented their arts that are derived from their country of origin.

I also couldn’t help but seek the comforting tastes from home at the UK table: 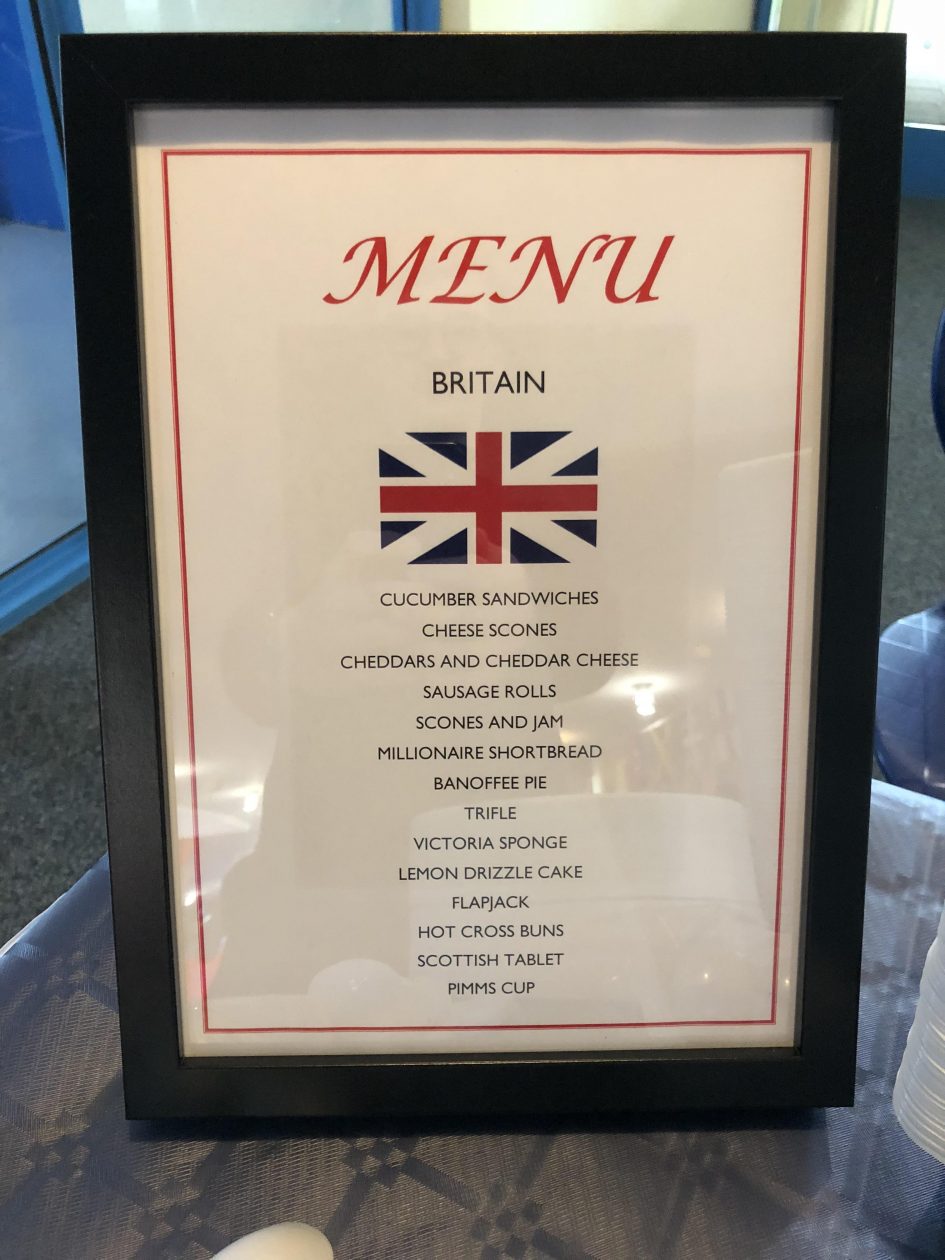 What I particularly enjoyed about this part was being able to show and explain to the children of my host family about all the different British (and Scottish) delicacies and they particularly enjoyed trying the banoffee pie and the trifle (after being able to already taste shortbread that I made at home). I also got to show the staff members what my background looks like as a menu along with my fellow British peers that work at ISS.

I was partially adopted by the French table, however, due to the mother of my host family being French and she herself had a great hand in preparing the table with her French peers. 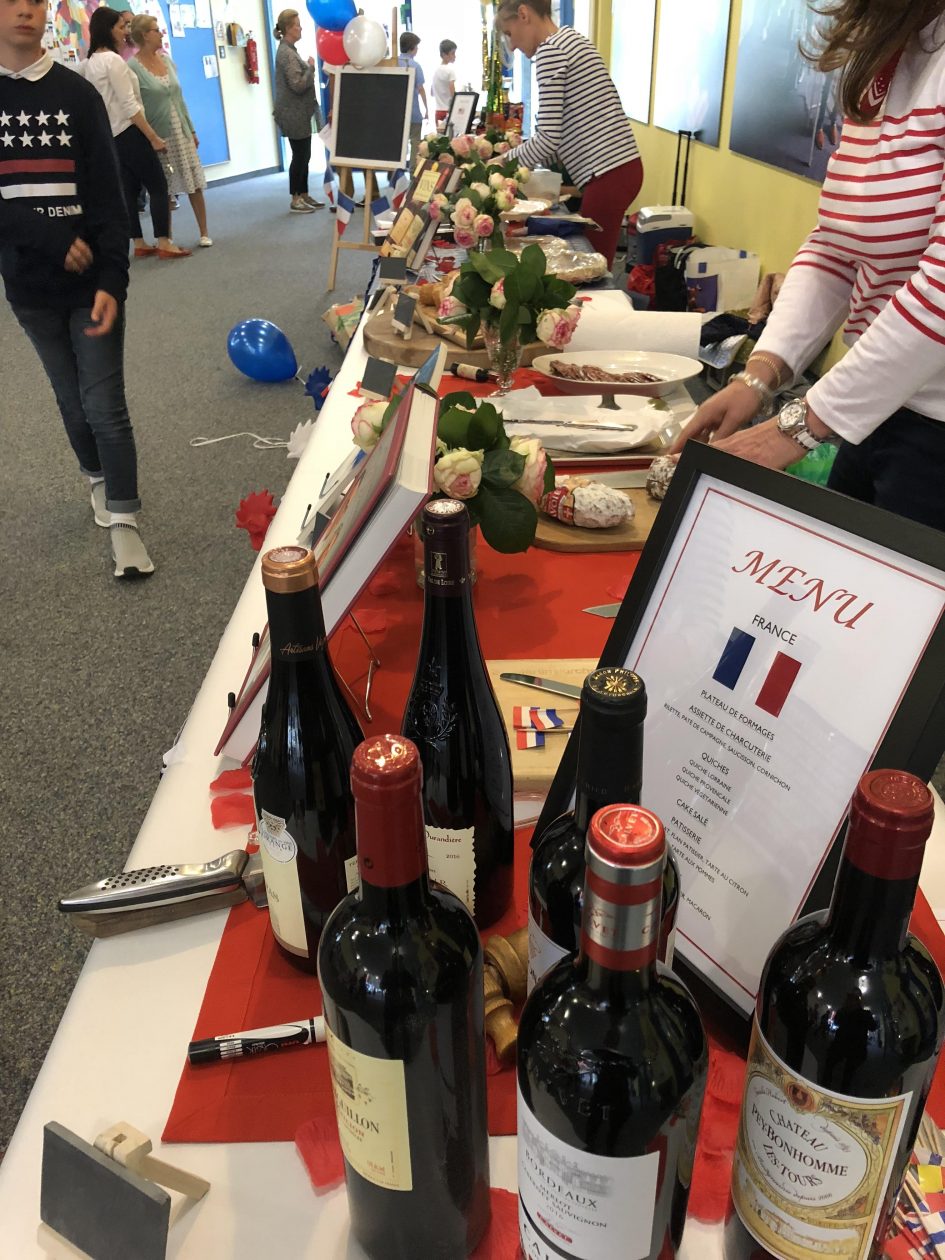 Vive la France! – crepes, wine, macarons and quiche were some of things on offer from the French table.

The French were making freshly prepared crepes for those that wanted a taste of France and many of those that were not driving got to have a glass or two of the finest French wine. I had the car and therefore had to refuse kindly.

Even just reflecting on this night as a personal development point, I would have laughed if a person had told me I would be devouring sushi, dumplings, crepes, curries and (holding onto my traditional home favourite) shortbread – especially in one night! I want to thank all of the helpers that prepared all the meals, the tables and the decorations because without the school community coming together to host an event like this, then people like me would not be exposed to the different ways people live their lives. One of the staff members that I’ve been really supported by during my time here even told me that they had worked across the world’s network of international schools and had never seen an event like the Mulit-Cultural Evening that is hosted by ISS ever in any of the other international schools, proving that it really is a school that flagships culture celebration.

Before the crowds would make their way to their cars to head home, the oldest son and I left in the car just before the winners of the raffle baskets were announced. It was my first time driving in Germany in the dark. It has been quite an experience to take on the high-speed driving of the autobahn for 2 months but it was another to do it in darkness. I will take badly when I return to the speed-limited roads of the UK! I have been driving all over during my placement; Sindelfingen, Stuttgart, Kirchheim unter Teck and even Sillenbuch. It’s been very handy having another driver with the family and I have been very happy to take on the responsibility of taking us places when the parents have had business or the children have particular clubs or events on during the week. It has really increased my confidence in driving and confidence in my own capabilities as a whole; gone are the days when I was first picked up by the family and we were zooming to my unknown place of residence for the 2 months at 200km/h in the Audi and I thought, “how am I going to be able to handle this myself?”. Now, it is me making those trips every morning and afternoon to get to and from school and beyond!

Once we arrived home, we settled in our rooms to sleep with full stomachs and full minds of all the things that we had experienced in one night. I have to say that I felt transported with every table I visited and with every person I interacted with during the multi-cultural evening.

Truly, a one-in-a-lifetime experience: this night, this placement and the school of ISS.

I leave this post with more of the photos I took during the night, however, I believe they can never do the grand event justice. The atmosphere could never be documented: 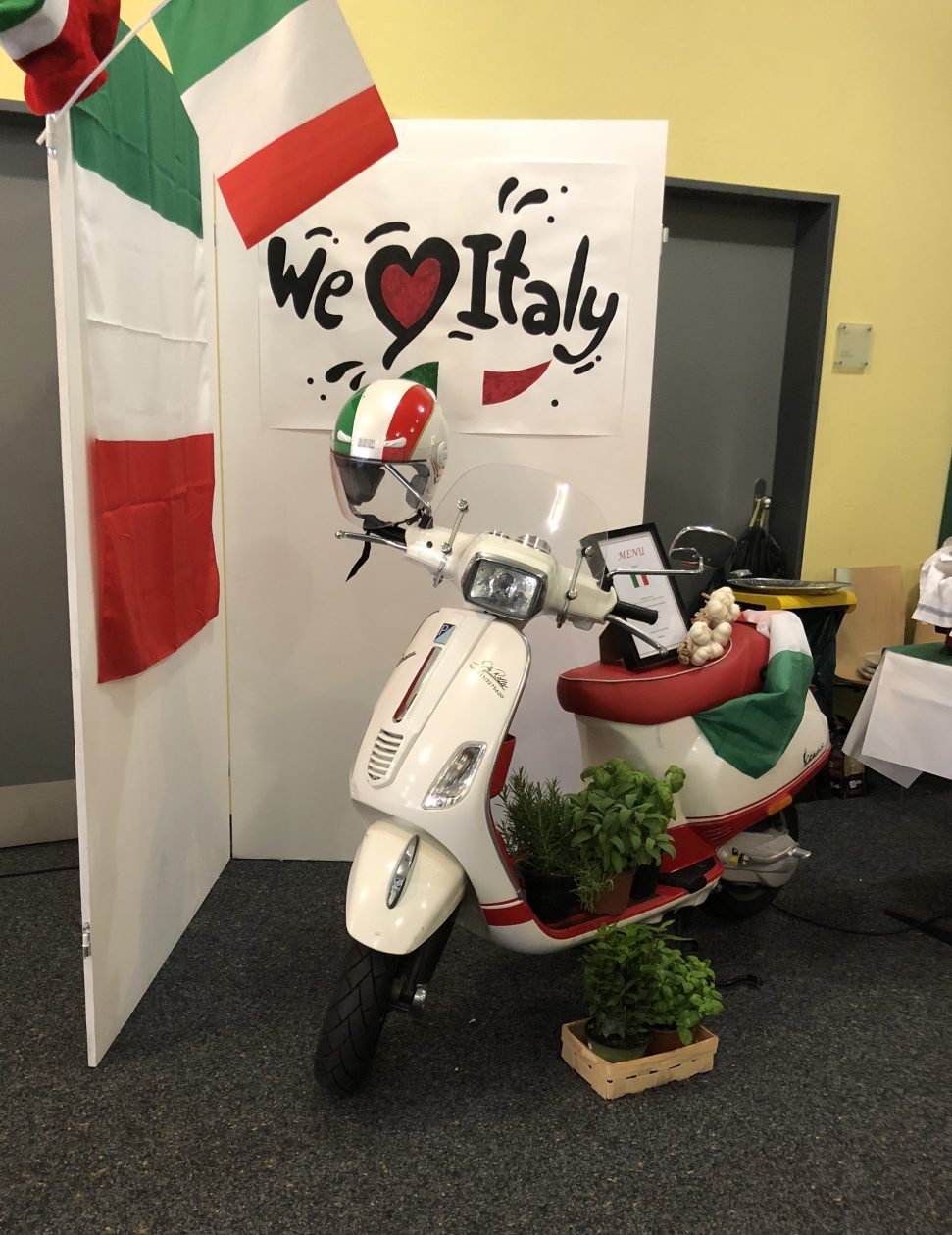 The Italian Vespa – Italy really stood out for me with their scooter. They served the iconic dishes like pizza, pastas and cheeses. 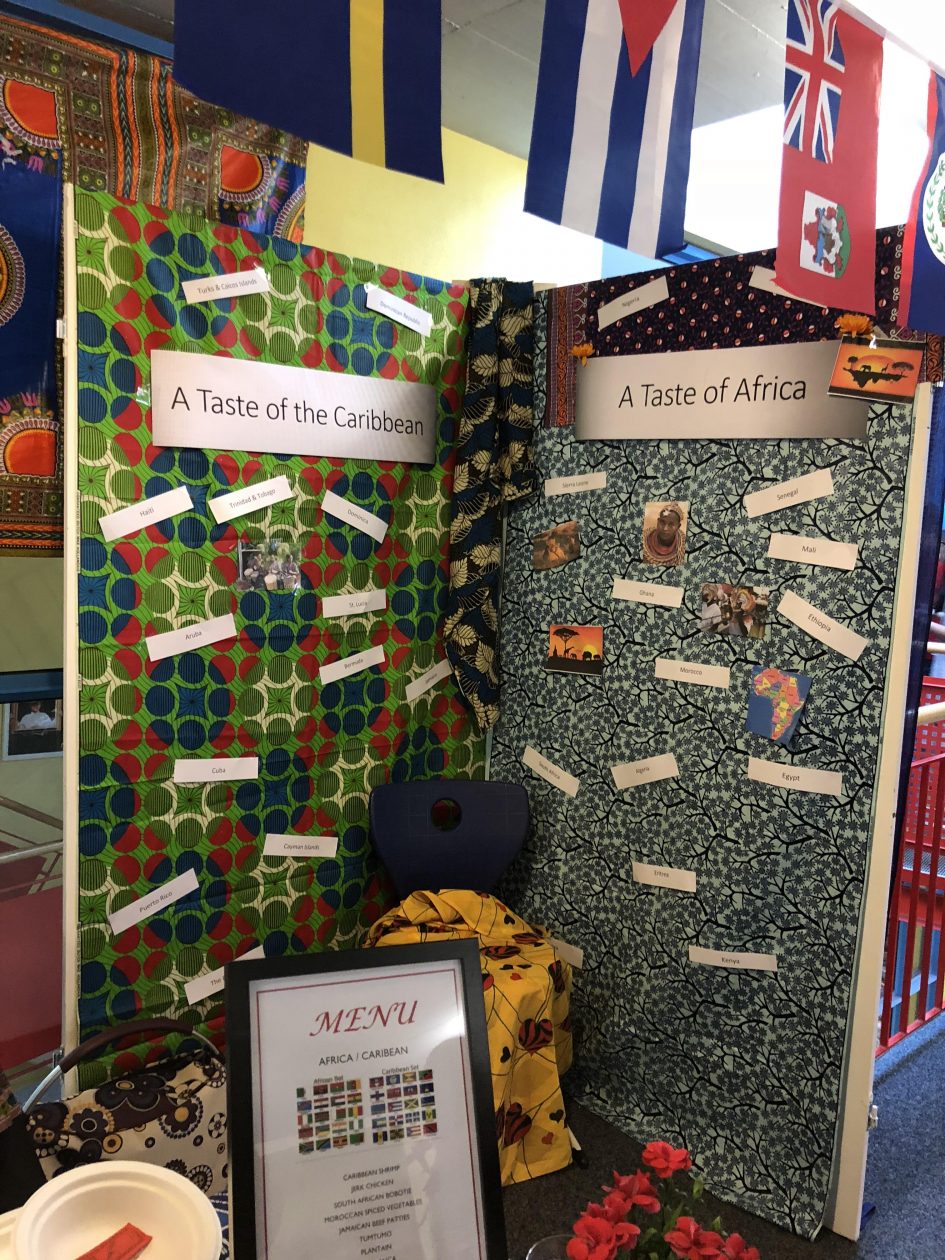 The Taste of the Caribbean and Africa – the smells coming from this table were amazing. The spices were really aromatic and the dishes looked so tasty. The helpers were also dressed in traditional African clothing which was also great to see 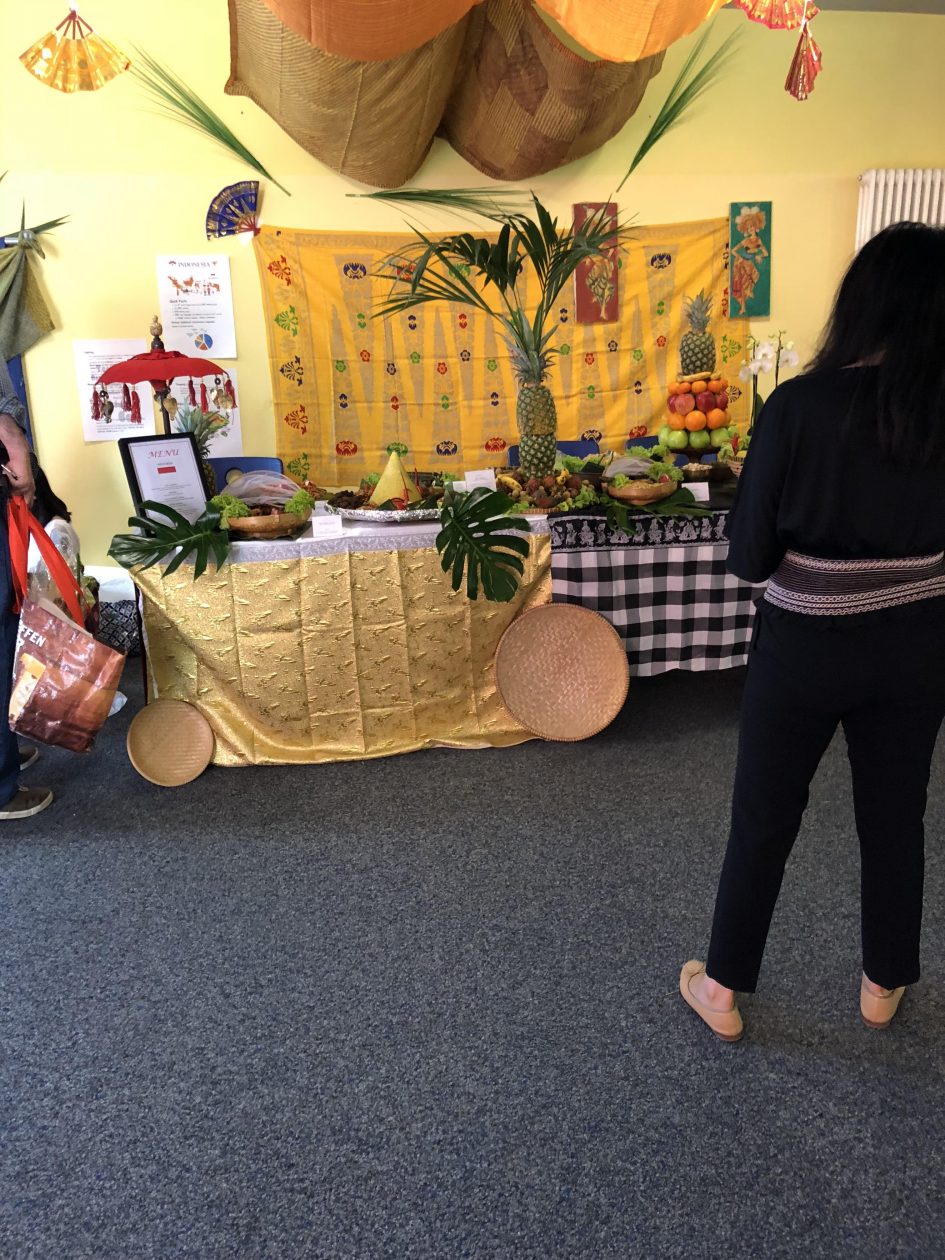 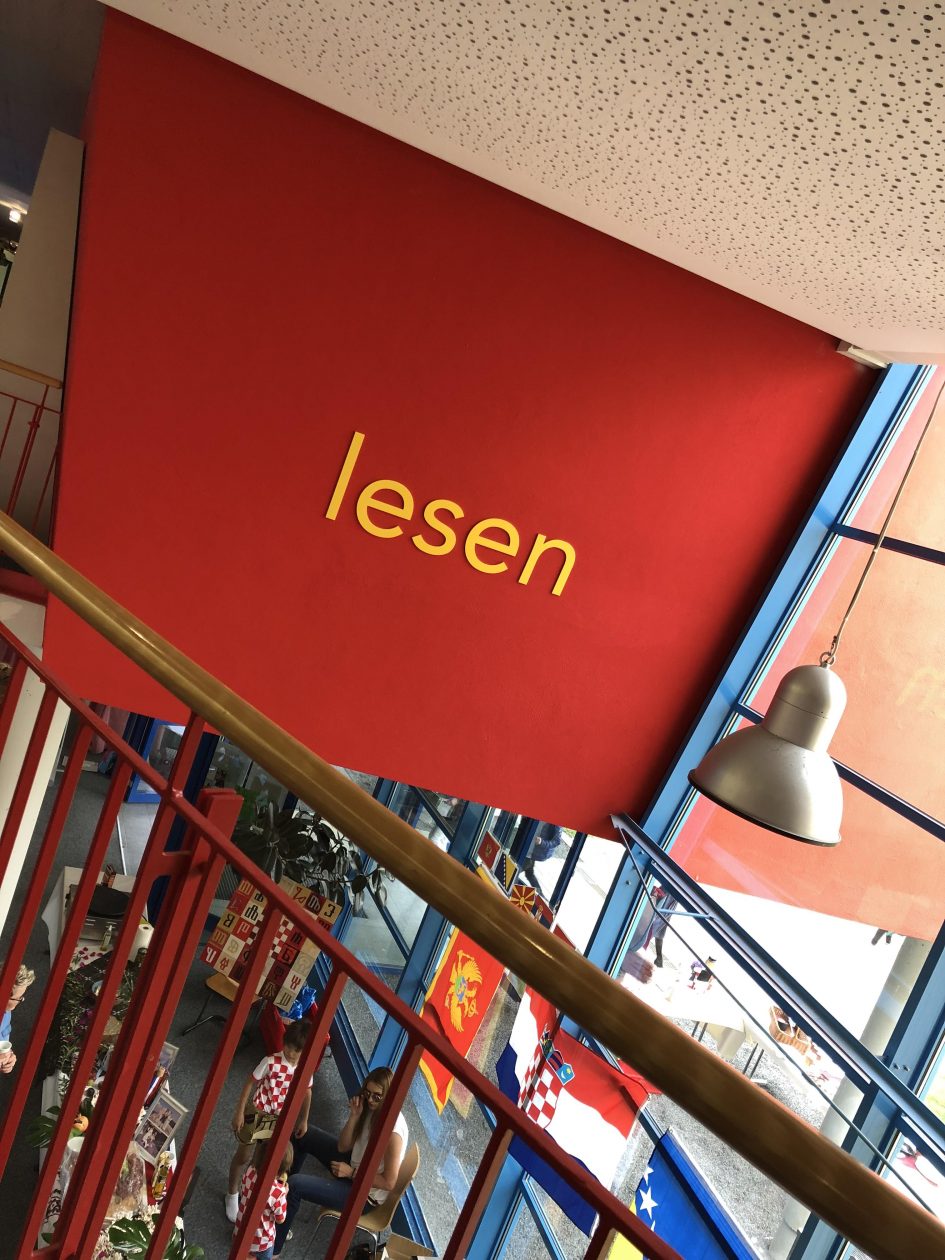 From upstairs the Croatian table could be seen down below. Also, the usage of “lesen” on the entrance way into the school is a great form of symbolism used by the school. The verb “to read” is used in the foyer in all the different languages that are evident at ISS, which served as a great environment to be hosting such an inclusive event

The Turkish Cultural Organisation (2018) The Turkish Art of Marbling (Erbu) [Online] Available at: http://www.turkishculture.org/traditional-arts/marbling-113.htm (Accessed: 5 May 2018).