This is now the second week that I have worked with the Grade 5s (23rd of April – 27th of April) at ISS and it has been a week of much learning, reflection and hard work – for teachers and students alike!

Monday was testing because the class teacher was unexpectedly absent so I had to maintain order and structure in the class while she was away. It was very reminiscent of the first few days of responsibility I had with my class last year because, as children like to do, some of them wanted to see how far they could push their limit of slacking off and trying to see if I was going to be authoritative or be dismissive. However, I did not let this deter me and I made sure that ground rules were outlined between us. What I found most beneficial for my practice this day was the break-up with the kid’s specialist lesson. This allowed me more time to be able to plan a more cohesive lesson for in the afternoon if I had otherwise had them the entire day. I could use the same strategy as the class teacher of setting to-do lists on the board so the children know what specific things they need to accomplish whilst also setting up an aid sheet where students could write what resources they needed (this being exhibition time many things need to be printed or sourced). By the end of the day on Monday, I felt it was necessary to get the children to have a self-reflection on their actions for the day – many were able to stay focused and work towards their goals in completing their work for the exhibition, where as others took this opportunity of change to sit back and have too much fun with their friends instead of being able to be productive on top of mingling with their peers. I did not ask for an answer of how the students felt they had conducted themselves today as the purpose of this self-relfection was to intertwine it with the ethos of the entirety of the school – learning is individual. 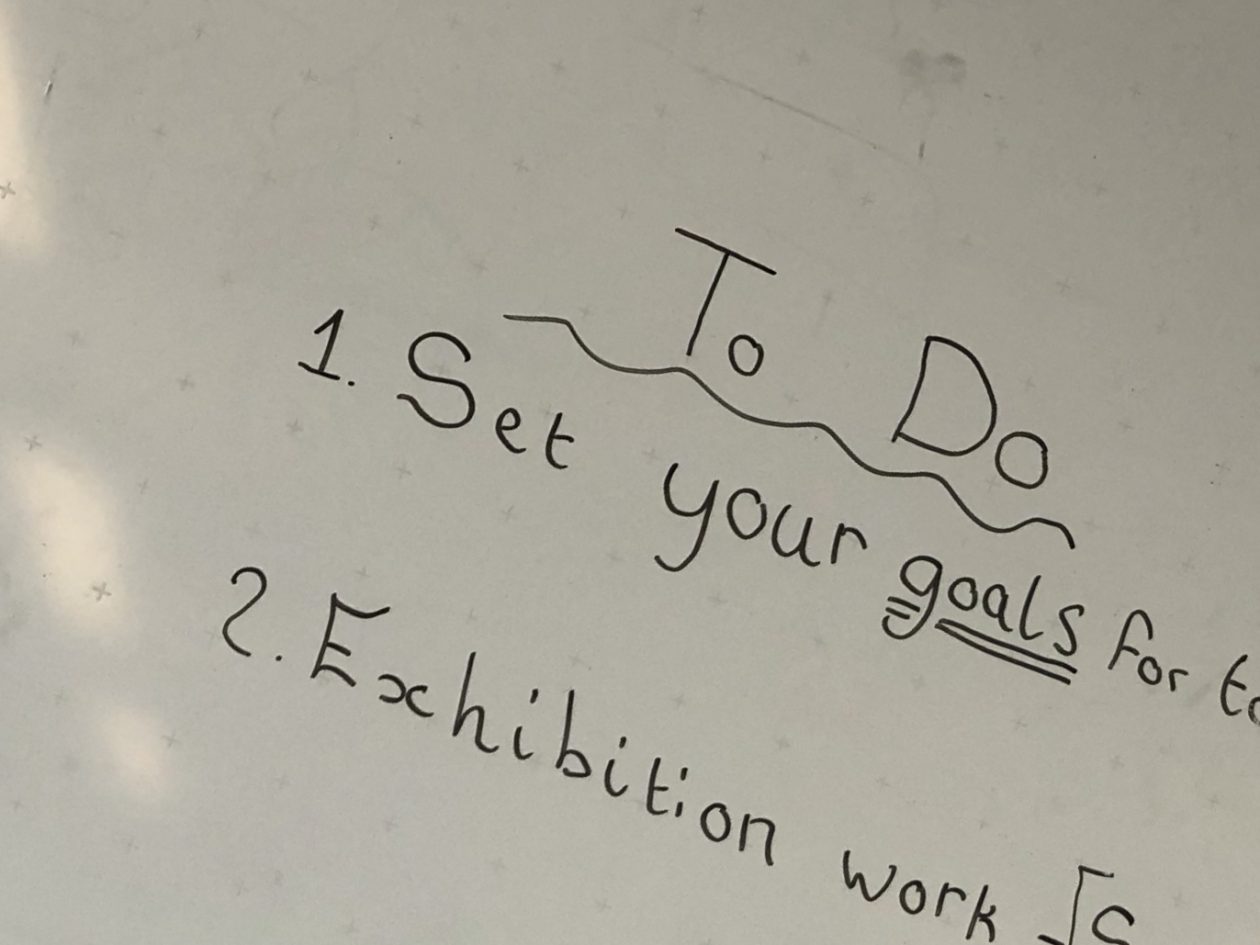 Before beginning their work in the exhibition, the teacher always get the students to think about and write down what they hope to accomplish by the end of each lesson – I kept up with this practice on Monday when I had the class myself. It also allowed me to practice my handwriting on the whiteboard!

I brought the focus back to the learner profile within the IB and asked, “were they striving towards being the best version of themselves that they could be?”

I ended on a more positive note and emphasised that tomorrow was a new day, a new beginning for them all.

Overall, Monday was a great test of my overall practice because I did not know I was going to be entirely in-charge of the class but I was able to maintain the order that the class teacher normally does. On top of this, I was making sure that students were receiving feedback on their weekly journal entries (a requirement in their exhibition to-do list because they need to also be checking in with themselves regularly on their learning and progress during the run-up to the exhibition night). It was great to be able to take charge of this section of marking because it allowed me to gain a scope into each individual child and be able to gauge where my support would be needed most.

Tuesday brought about some more normality as the teacher had returned and was feeling better. She was impressed that I was able to keep everything organised in the same manner that she would and thanked me for being able to keep the class on task and not lose out on a day of learning.

This meant I could continue my work with the German specialist class on the Tuesday. The class were tasked with memorisation games to introduce the learning for the lesson and get everyone warmed up to work in German again. The rules were quite strict in that, in order to gain a point, the student had to not only remember the word in German, they also had to spell it correctly, remember the article (der, die oder das) and remember capital letters (the topic was still die Gebäude – buildings so they are nouns and require a capital letter). This then shows the students the importance of learning a word and its article, which is a great way in introducing them to the many grammar rules that German holds. It is also good for me to see the progression, not only between the grade levels, but also across a singular grade level’s learning process. I’ve been planning with the German teacher and she hopes to then lead this vocabulary into experimenting with sentence structure and teaching particular points of grammar. This approach will facilitate the introduction of skills needed to communicate in the language of German. It also makes the language more “user-friendly” instead of putting grammar rules in front of them and forcing them to re-write them and just try and memorise them. Actually playing with the language and being corrected along the way makes it more fun and engaging for both students and practitioners.

I have also discovered this week some difficulties that can occur with the inquiry-based approach to learning, particularly when great amounts of responsibilities are put upon children. Although it produces autonomous learners who strive to learn for themselves, there can be problems that occur (like any approach to learning). For example, this week the grade 5 students were required to bring back their display boards they had taken home to mount with new paper, however, some students forgot their board and were unable to continue with putting their information on the display boards. This then led the students to take up the idea that, because they did not have the resources, they could easily sit back and do nothing. This then led to distractions occurring and many students were then taken off-task by their peers who did not have the resources they needed. Children had things left at home, needed technology, had to do certain tasks that required resources that they didn’t have at that time, therefore, it pushed them to think they had nothing to do. It places a lot of responsibility on students to a point that it could be detrimental when they fail to meet the expectations. On the other hand though this could spark learning experiences in itself because the exhibition results are a reflection of the capabilities of the student not on the practitioner because they have provided the prompts, they have provided the skills to accomplish the task they have set and they are there to support. Reflecting on this, I think if I was ever to conduct a project in this way, I would make it a priority that resources are left at the school because taking things home then causes an issue of things being left and people straggling behind, however, it has also shown the students that they need to be prepared and organised in order to gain the most from their learning… It is all a learning experience.

Wednesday was also interesting as during planning meetings I discovered the teachers need to organise when they are doing the MAP tests. This was interesting because the International Baccalaureate outlines that standardised testing is not in their educational ideology. MAP tests stand for Measure of Academic Progress and it is an online assessment for literacy, numeracy and reading. Some give multiple-choice questions while others ask for more analysis in regards to an extract to see if a child is capable of recalling what they have read and being able to make sense of it. This will take up a whole week of learning because of the different times of classes, specialists and the timing of their class trip. The teachers also told me that the results of these tests are shared with the children and their parents – something that is a little different from the standardised tests I remember doing in primary school where the information was purely for the teachers to see where their children were at. My particular class teacher mentioned that many parents come to the class and are worried by the change in results by these tests and the practitioner has found there is a correlation with the lower scores lining up with the students completing the assessment the quickest – proving that they probably just click whatever answers they are given to finish it instead of actually being examined for their true mental capabilities.

Mathematics has also been a different setting from the other grades. The grade 5s are nearing the end of their measurements and grid topic and are working on consolidation through textbook work. Now, this is another opportunity for the students to be independent. The practitioner always states that the students should work on areas they need the most work on and shouldn’t just do every question in the book. Each student has their own checklist of chapters that would be beneficial for their progression in mathematics. Furthermore, if they feel they are doing well in a particular section and are getting all the questions correct and feel confident, they can move on. On top of this consolidation work was more fun activities such as grid plotting images. 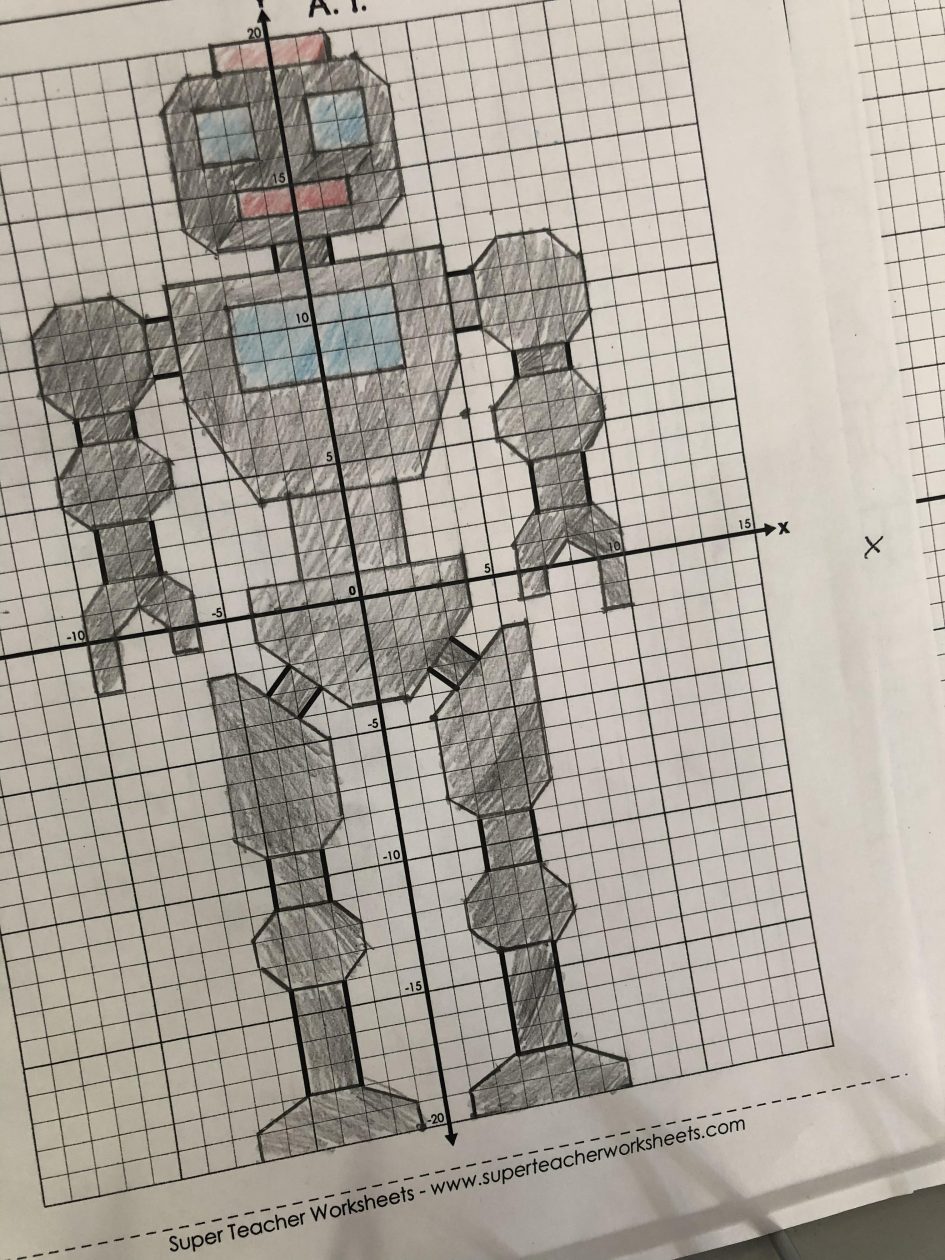 Here is an example of the end result of a grid plotting activity – the students were really focused and it required their skills to be tested in order to complete each section using the correct co-ordinates. A great consolidation activity.

As the week was coming to a close, it was time to organise the roles that the staff members would have in preparation for the exhibition night. The teachers had totally forgotten that they must also make a video documenting the learning of the students so I felt it would be beneficial for me to take up the responsibility for preparing and making the video for the night. We have picked particular students that have progressed well in their exhibition and are able to take time out from their work to be a part of the video which will document their overall learning in the scope of the learner profile. We made a sheet up and gave it to the students to think about over the long weekend and we will begin recording on the Wednesday back from the bank holidays here in Germany.

Overall I have really enjoyed this week because it is giving me more responsibility with the classes of Grade 5 because I am working with them for a longer period of time. Next week will be a shorter week as we begin back on Wednesday, which gives the students even less time in class to work on their exhibition topic. I hope to come back refreshed from the longer weekend and be ready for more learning and responsibility ahead!