Much preparation at ISS has been put into this week (16th of April to 20th of April).

This is because of the special visitors that have come to the school. There are students coming from England, Poland and Italy as part of an Erasmus scheme where the partnership is centred around rethinking “Playgrounds as a Learning Environment” with the partner schools.

I have been witness and have supported the work that has gone into this week. Within art, the students have been making displays of their home country’s traditional garments that they wear on special occasions. On the back, as these displays will be showing both sides of the outline of a person, the students were then tasked to either draw their home country’s flag or make their own design using the recognisable shapes, colours and symbols from the flag (interlinking with the visual elements that are crucial to the teaching and understanding of art). 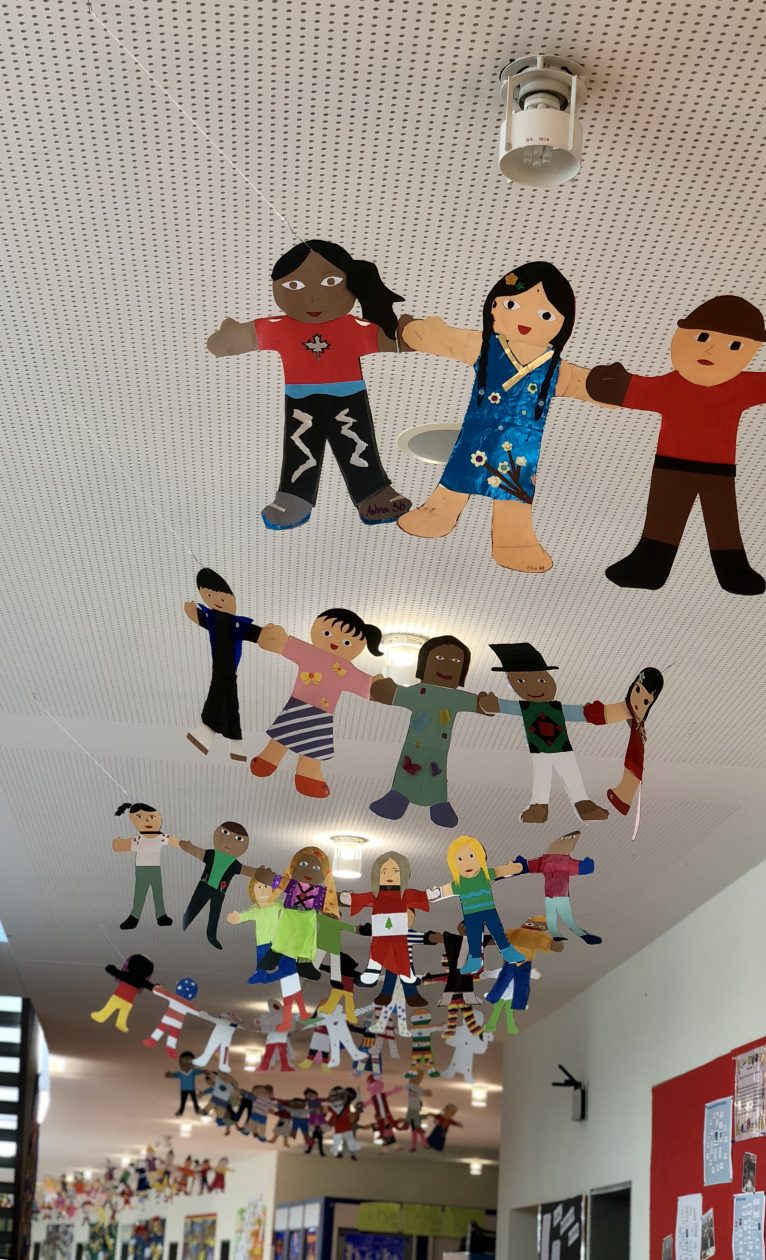 The corridors have been full of the traditional garments – further emphasising the celebration of differences at an international school.

On the 16th of April at the start of the week, students were welcomed into the school with a whole lower school assembly that celebrated the city of Stuttgart, but also the different languages of the visitors. Students were also dressed in their home country’s traditional clothing. I saw kimonos, lederhosen, saris, dirndls and even american football jerseys all across the school (it made me wish that I had brought my kilt with me). The kindergarteners and Nest children (who I worked with during week 5) sang the guests in; first in English, then in German, then Italian and then Polish. It was amazing for all of the children, no matter their background, to be able to experience the different languages that are out there and be able to practice in singing them too at such an early stage – this could even spark an interest later in life and students may even study them further. Then, students that are ISS that are from the visiting countries put on a sketch with some staff members to demonstrate them first arriving at ISS and wanting to learn more about Stuttgart; a particularly useful aspect for me because it gave me more insight into Stuttgart and the surrounding area of the school. We got to then see the German children from Grade 2 sing us through a pretzel song – a famous delicacy in Germany –  that they had also made illustrations for.

The student council were then tasked with taking their visitors to the library where they would be working on their projects centred around playgrounds.

Tuesday (17th of April) was another special day for the visitors who will be with us for the whole week, as they were treated to a multi-cultural lunch. Staff and Parents had prepared dishes from their home country and shared them with the grades 4 and 5 and the erasmus guests. I also got to enjoy some of the foods and they were all so delicious and different from one another. I tried sushi, chill, coconut rice, ham sandwiches, quiche and a mixture of other things! There was so much food and everyone was very full afterwards. It was also great to see all of the kids mixing with one another and including the erasmus students at their tables in the canteen – it highlighted to me how inclusive international school children can be of one another because they understand what its like to be in a strange environment from what they are used to back at home. 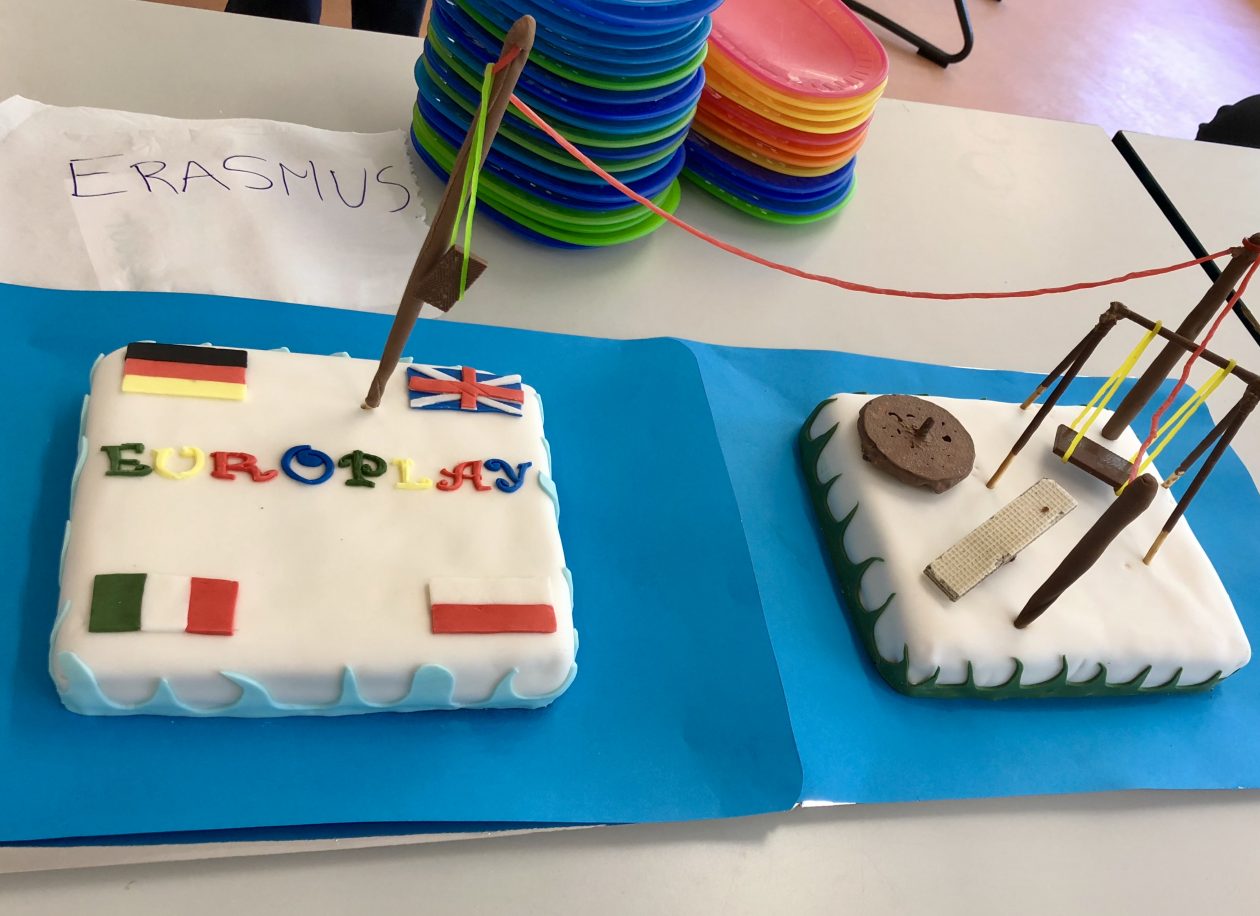 The Erasmus Cake – one of the desserts that were available for us during the feast. This particular cake really stuck with the partnerships theme of exploring the learning spaces of playgrounds.

The visitors will be here for the rest of the week and I have made sure to welcome them to the school in the same way the rest of the staff members welcomed me when I first came here in early March.

This all interlinks with section 3 of the portfolio as I am really getting to see the broadness of the stakeholders that are associated with ISS. The interconnectedness of this Erasmus partnership has shown how the stakeholders can all come together (parents, staff and students) to produce a week of great events that showcase the diversity of the school and, in turn, the wider world as a whole. This all then fosters the learner profile that ISS strives to create within their students.

Something that was also hard-hitting amongst all of the celebration was one particular staff member opened up to us in the staffroom and emphasised that they wished their more conservative family at home could be so open-minded to all of the differences of people in society and that the staff member will miss this ethos at ISS when they return home over the summer. Celebrating differences breaks down the boundaries and I really love the ethos of ISS because all of the parts of learning all correlate to one another to really ensure that open-mindedness is at the core of everything.