Although I am on my easter break this week, I still feel that it is necessary to write another weekly reflection, because I am still gaining a lot of learning in culture and language with my host family. Furthermore, this time has allowed me to explore the town of Kirchheim unter Teck more. 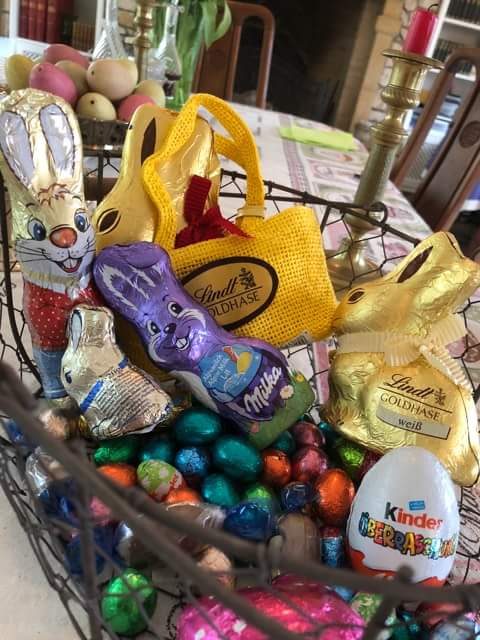 Frohe Ostern! – I got to participate in the host family’s easter egg hunt on Easter Sunday

On the Easter weekend, I got to enjoy many of the traditions that German people uphold in their celebration of Ostern (Easter). My host family had already decorated Easter trees around the house, had easter eggs all prepared and we even had an Easter egg hunt on Easter Sunday in the garden! It was beautiful to see some of the German traditions come alive in a real life setting – it was interesting to finally see it all transpire in the flesh when comparing what we learned about German culture in school. I must say, however, I think that I have eaten far too many chocolate eggs! We spent Easter Sunday completing the egg hunt and then celebrated with a home cooked roast together, which was really lovely and it made me feel really part of their family unit.

Being off the school has allowed me to engross myself in the everyday usage of the language of German – going to the shops, buying things, interacting with the family and people in the town in the state of Baden-Württemberg. This has benefited the advancement of my skills in speaking and listening, particularly within everyday scenarios. Gone are the days where I am trying to remember specific vocabulary for a presentation in German, now I am actually having to use the language to communicate specific points in order to be understood. I was even preparing shopping lists in German so that I knew I was getting the right things! As small as these milestones are, it really shows that I have had to really go back to basics to really utilise the skills that I established in studying the language of German in both school and the University of Dundee. I may know abstract vocabulary for global issues that we learned about, however, simple conversations have been a lot more trickier but also a lot more fulfilling when I have successfully communicated my point across.

Tuesday brought about some amazing sunny weather, with a nice warm heat of 21 degrees, that we were able to enjoy (what made it even better was getting updates back home that the weather has not been good in Scotland). I got to travel around the town I am staying in and enjoy some of the architecture and the lovely scenery that is evident in the area – much of the town is mountainous and rural very much like Scotland (Kirchheim unter Teck’s name translates to the town of Kirchheim that is under the mountain Teck). I also got to enjoy a nice meal at a traditional German restaurant (supposedly it was the location where the state of Baden-Württemberg was discussed as being formed into one state, as it was historically smaller states that were formally combined in the 1950s). This also led to the family introducing me to some of their friends. What was particularly interesting about these friends was that their German was somewhat different from the German that I am used to hearing from school listenings and news clips. They had a specific dialect of German known as Hochdeutsch (literally high German). I was able to understand main parts of their speech, however, much like when us Scots speak very fast in our dialect, it became quite tricky to understand everything that was being said. This showed me that, very much like English, there are various different dialects to German besides the traditional version we are always exposed to in school and in movies. I think that this interesting variation in dialects and language would be an interesting area to explore in a Scottish curriculum setting, as it would engage students in relating to the differences in their own dialects and language when exploring the styles and variations of another.

An example of Maultaschen (sourced: https://upload.wikimedia.org/wikipedia/commons/0/08/Schwäbische_Maultaschen_2.JPG)

I have also been able to dabble in some cooking of German food whilst with my host family. A particular dish that has intrigued me the most is Maultaschen (singular – Maultasche). It literally translates as a feed bag (Maul – mouth + tasche – bag) and it is a unique dish that is at the heart of Baden-Würtemberg and was recognised as a regional speciality in 2009 by the European Union, which protects the dish as being produced only in the area that invented them as it is a Swabian speciality. The closest thing I can relate it to is ravioli, however, it is packed more fully with a minced meat and herbs substance in the middle. They are very savoury and tasty and are a core element to the culture of the Swabian heritage that is evident within the area of Baden-Würtemberg.

However, I have also been able to share some of my Scottish heritage with the host family. On Wednesday night it was my responsibility to cook dinner so I thought I would prepare something Scottish – stovies. Although it did not require gourmet cooking, I found it a great achievement for me to be able to cook a meal completely from scratch for the family. They loved the meal and found it very filling. It was also good to be able to taste something that is very reminiscent to a meal at home. I’m lucky that my grandmother showed me how to make the tastiest stovies! This means that I have not only been able to learn about a new culture, I have also been able to share my own with others, which interlinks with the core purpose of ISS (and also one of the many goals that I wanted to achieve whilst being in Stuttgart). Not only did I cook a Scottish meal, I also baked some Scottish shortbread on Thursday evening. This placement has not only advanced my professional outlook on education, my understanding of German language and German culture, but it has even allowed me to improve my culinary skills – something that is necessary for independence in life (something that I aimed to achieve through this placement). I really am “Learning from Life” because through everyday interaction, I have been able to make big leaps in my own self-concept. Formerly, I would have just bought shortbread from a store, however, being in a different country where that isn’t so easily possible, I had to use my initiative to create my own (and, it is actually an easy biscuit to bake. In future, I think I might bake my own shortbread instead of just going to a shop for some). 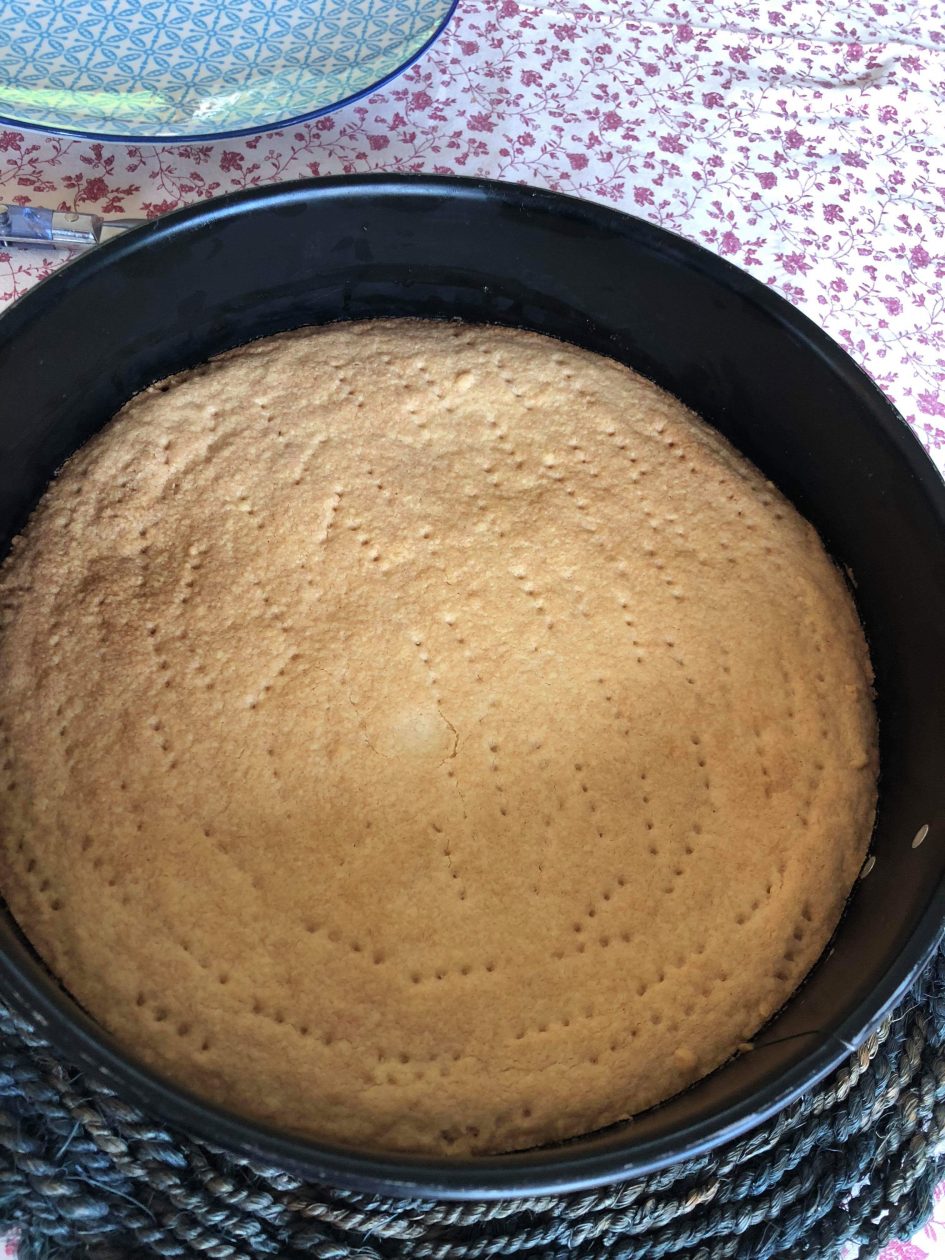 The shortbread that I baked for my host family – the sharing of cultures and traditions is proof in itself that differences can bring people together – the core ethos of ISS.

I have also seen a great development in the English of the son of the host family with them having me here. His volume of speech has expanded a great amount with coherence becoming stronger with every conversation he has with me. It is also evident that he has began to imitate much of the vocabulary that I have specifically used to spark new words and terms that he may have not heard before. His homework for English has also improved and he is not needing as much support from me to be able to complete his book reviews. It has amazed me what a young mind is capable of in terms of language acquisition. English is his third language and yet he uses it very well and I can only see improvements from here on out and I am glad to say that I was a part of that advancement. We have also been helping one another in the desired languages we both want to learn (German for me and English for him) by having conversations in both languages and assisting one another in gaining the required vocabulary we wish to learn, but we have also found it useful to watch movies and TV shows in the evenings in either German or English so that we can hear the languages even more through a multimedia platform. Its also been interesting to show him some of my favourite English movies that I enjoyed as a child and to see that interest be passed on. Its been even more interesting watching some of the most famous English movies in German and being able to correlate some of the phrases from English to their German counterparts (particularly, watching the Terminator movies has been interesting to hear it in German).

Now, to conclude this particular post I believe that I should have a check-in with what I have achieved so far, what I still hope to achieve, and what I think will be my future learning to take away from the entire placement when I return home in May.

Firstly, I feel that I have achieved much of what I have set out to do or I am heading in the right direction to achieving it. Particularly, I have advanced in the skills that I broke down in my audit of skills and I have utilised my prior knowledge of German and Germany to prepare me for interacting with the people in both Kirchheim unter Teck and Stuttgart. Key skills that I feel I have progressed in are sharing opinions confidently and taking risks because I have been able to share my professional feedback to other staff members to give them an outsiders perspective on what they do at ISS, but I have also shared my own personal opinions with people at the school and with my host family in order to show them my way of life and culture. I have taken risks in terms of having teaching points with groups of children and having some whole class interactions with some of the children from different grades as well as I’ve had to ensure that my approach towards teaching correlates with the IB’s guidelines. I’ve used my prior knowledge of last year’s placement to really find my footing at ISS and to be seen as one of the staff members at the school by my professional peers and the students. Furthermore I have investigated into the educational literature surrounding the practices of ISS (particularly the concept of inquiry-based learning and the overall ethos of the school in my other blog posts).  Overall, I believe that I will come out of this experience a changed person. I have more confidence within myself and my capabilities as a person and as an educator. I think that the growth mindset ideology has taken shape in my own educational philosophy: everything that I have faced I have tackled with the mindset that I can achieve whatever it was that I set out to do and it has proved to be a great way to go into things.

Next week when I make my return to the school, I plan to begin my work with the Early Years team at ISS and interact with the Kindergarten and Nest areas of the school in order to use the knowledge I have gained this year in lectures and research in a real life context. I also hope to gain new professional knowledge from the staff that will be experts in what it means to be a successful practitioner with younger children. From then on, I will use the rest of my time working with the grade 5s whilst they prepare for their grand event of showcasing their unique topics of inquiry – the Grade 5 Exhibition.