Prior to coming to ISS, I had only heard about the implementation of inquiry-based learning within the primary school classroom. Inquiry itself, to me, is to go forth into learning with an aim to prove something or to investigate a topic for yourself; it is a key method of study at university as independent adult learners, we need to be able to independently investigate our topics whilst also searching through lots of different sources to find what we are looking for. We may not think it, but this takes skill to decode what is needed, what is useful and what is not needed and that can be discarded.

I originally thought that using this method, within a primary school setting with children,  would not only create a loud and chaotic learning environment that would most likely lead students off-task but it would also mean that, as an educator, you are taking a step back from being a teacher by leaving the children to their own devices.

However, I was very wrong in my original assumptions through further investigation in academic reading and being witness to the amazing work of inquiry-based learning at ISS.

Kuhlthau, Maniotes & Caspari (2007) find that guided inquiry has been researched extensively to a point that, when used effectively, it has been found to produce the best, deepest learning experiences for students, as they are constantly and consistently forming new ideas and learning on top of pre-existing skills. The role of the teacher is not to simply provide the resources for learning and then leave them to investigate; children need to first be established in their “pre-existing skills” with sound knowledge that is provided by the aid of the practitioner in questioning sources, using search engines properly, and having prompts to be brought back onto task throughout the process. After all, it is called guided inquiry. Inquiry needs a purpose which must first be provided by the teacher before children can be sent on their inquiries. Jo Fahey (2012) also believes that inquiry is best utilised when investigation has been thought out by a practitioner but is still allowed freedom for the children to interpret through their own analysis.

Its been very beneficial for my role as a teacher to really be questioned during this placement – something that I didn’t think would happen as much as it has in such a short space of time – as Scottish education has seen a retainment of much of the traditional didactic formats of teaching, with the teacher at the front of the classroom leading much of the learning. At ISS, I have only seen this used a handful of times to introduce new learning. Much of the learning is then sourced by the children whilst being aided by an adult. Teachers should be facilitators of learning instead of thinking that children come to school purely to gain knowledge in their empty minds that are there to be filled with information from a teacher. Students come to class with their own experiences of the world that are entirely unique to them, and with them comes areas of knowledge and skills that a teacher can be missing. Units of Inquiry allow these experiences to be both recognised and flourished in an educational setting whilst still retaining a core purpose for a teacher.

I have witnessed this myself at ISS.

At the very beginning of my placement, I was amazed at the independence of the grade 4s in their unit of inquiry centred around the exploration of media. They knew their groups that they were working in and they knew exactly what goals they were striving towards within them and they were on the right path to be able to work towards completing their goals. However, what I did not see was the prior learning that clearly went into facilitating the children with the sound knowledge of what they actually had to investigate. It was this establishment that then allowed for independence to spur in the children’s learning. The teacher also needs to be very focused on the learning that is occurring during inquiry as I also witnessed and aided in steering a group that was going off task in their inquiry, as this is an issue that can occur in inquiry-based learning. This, I felt was harder than getting children who have been assigned a task back on track because they had already began much of their research towards the project they were making for their grade year assembly. However, there was learning within the corrections, also. The children realised they needed to use their self-evaluation skills and critically see what areas they needed to adjust in order to get themselves back on track with the assistance from us as the teachers.

Therefore, I see great method behind allowing children to inquire into their own learning, whilst still giving them a field of view in which they must remain (which is the central idea in IB). Not only has reading about the concept of inquiry-based learning been useful for my overall understanding of the practice, but I have also been able to see it in action for myself and really got to grips with adjusting what it means to be a successful practitioner.

A wider question I have however is, what would this format of teaching look like in a Scottish educational system? I question if the culture towards education would be able to facilitate the practice in such a successful manner as the International School of Stuttgart does. It will have taken many years of work, then years of structured reflection and analysis towards practice before ISS was as confident in the practice and I think similar initiatives would need to be examined if the curriculum for Scotland was to adopt a inquiry-based approach in a full-time manner. 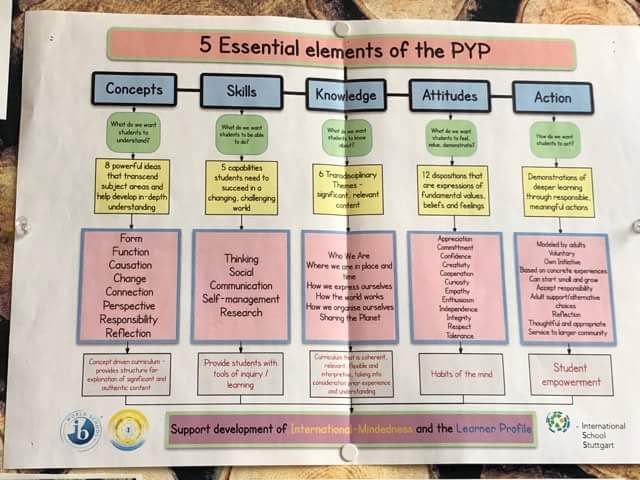 The 5 Essential Elements of the Primary Years Program – All areas correlate to supporting the production of international-mindedness within students that exhibit the Learner Profile.

I’m so glad that I chose the setting of an international school as I have been able to get to grips with a system for education that is quite abstract from the one I am used to in Scotland, thus sparking massive areas for critical reflection towards what it truly means to be a successful primary school teacher.