As I’ve mentioned before in previous posts, I am in a unique position at ISS: not only am I working with children across the grade levels, but I also get to observe the varying practices of the staff at ISS, which gives me multiple areas to draw upon to shape my overall professional practice.

An area that I really wanted to see if there was a difference in practice was with the German classes. Within my earlier blog post, I found that the grade 4s were equipped with exceptional skills in the German language, and their teacher and classroom environment pushed these skills further with a full encompassment approach to fully engage the children in using German. However, I wondered if this was always the case for the students, were they always able to be so flexible in their understanding of language?

Whilst with the grade 2s, I took it upon myself to also observe their lesson with their specialist teacher to see the difference between the age groups. 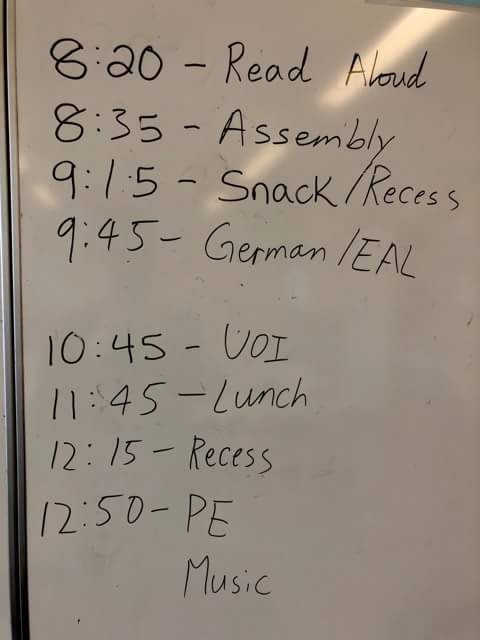 At 9:45, I went with my grade 2s to observe and partake within their German lesson. It was very helpful to see the differences between the grade 2s and the grade 4s lessons.

Now, the classroom environment was still the same, however, students were allowed to speak in English to explain more complex ideas if they did not know the German for something, showing that some of them are still new to the language. However, the teacher always emphasised to the children to always try in German. Furthermore, whatever response she got from a student in English, she would then repeat it in German so that they would gain the vocabulary and learn the grammatical structuring required to produce a particular answer. An example of this was during the introductory discussion amongst the class. The students were casually asked by the teacher what their morning assembly was about. A student formed their sentence in German correctly, however they did not know the German for computer security (Computersicherheit), as the assembly in the morning centred around the grade 4s teaching us about our media-rich world (which I saw come to fruition during my first week at the school with the grade 4s). The teacher used this as her first teaching point and emphasised the connectedness German has in terms of technology vocabulary (Computer, iPhone, Laptop etc.) with English.

This, was very crucial for the students as it then opened a wider avenue of vocabulary they could utilise within their understanding of German, making it more relevant for them (also, I believe that a modern topic like technology sparks more interest with the kids).

I believe that this open environment to experiment with language is crucial for the advancement of skills. At one time, the grade 4s, that are now very capable in their German, were probably where the grade 2s are in understanding when they were younger. ISS clearly has a correct approach towards the advancement of language: the children are in a language-rich environment and are getting to hear it from a native speaker, they themselves are enthused to try as much as possible to participate in discussions and they work with their peers to progress in their skills. The teacher also highlighted that she will jump back to English whenever she feels it is necessary so that the children do not feel pressured when being questioned.

Another difference was the expressive nature of teaching. The practitioner was far more animated with the grade 2s in order to engage with their youthful eagerness. Also, she got the children to perform songs with her in German with actions which they thoroughly enjoyed (something I think the grade 4s might have begrudged about!). This approach has been emphasised by lecturers during our Languages input last semester, using rhymes and songs have been shown to be very beneficial to the encouragement of language learning.

With the level of German being a little easier for me to understand, I also spoke to the class to ask them questions (the lesson progressed into the exploration of fairytales in German – another topic easy to understand as fairytales are universal). This not only got me to practice my German, but also got the children to hear a different dialect of German being spoken.

So, we can see that through dedication and handwork, the acquisition of additional language can flourish when the correct tools are used to aid the children, something that Scotland could work far more effectively on. To interlink this with reading, Kirsch (2008) believes that the best approaches towards foreign language learning in the primary school setting are the ones that make it relevant and engaging for the child, otherwise, they disengage towards the abstractness that language learning could produce when children do not understand or see the real importance of why they are learning another form of communication from their mother tongue.

Overall, I believe that I am using my time at ISS effectively well, which is improving my time management skills also, as I have been making sure I maintain a nice balance between witnessing specialist classes and also attending homeroom teacher meetings. To progress further in my understanding of language learning, I will try to also observe a grade 1 German lesson to see the differences and similarities. I will also try and participate more in aiding the lesson as much as my German will allow!