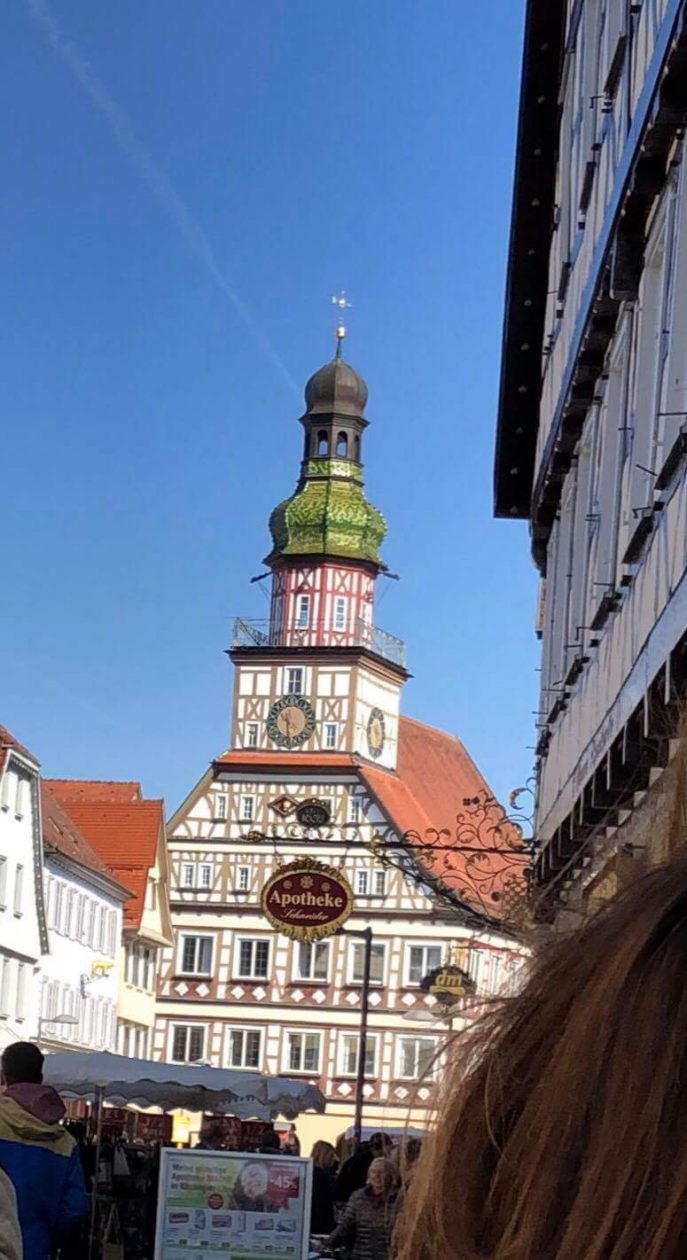 This was taken during the markets in Kirchheim at the weekend.

Second week down and it has been a very busy one.

At the start of the week, I began descending down the grades as I moved from the grade 4 classes down to grade 3 from Monday to Wednesday (19th – 21st of March 2018) and then to the grade 2 classes for Thursday and Friday (22nd and the 23rd of March). This allowed me to see the progression that occurs through the stages and to examine the sort of skills that are being developed across the years.

So, as I stated earlier, I began working at the start of the week between the two grade 3 classes at ISS; grade 3a and grade 3b. Similarities in approaches from grade 4 could be seen in terms of behaviour management with regards to systems in class points, table points and counting down to gain attention. However, an interesting method utilised by the 3b teacher was the usage of the dollar system. Because she was from America, the teacher introduced the dollar system within her class that saw good behaviour being praised with an amount of dollars and a misconduct requiring a student to owe the teacher a dollar. This worked well because the teacher would open a store at the end of the week for the children to spend their earnings, which also taught the students the importance of budgeting and saving. The teacher emphasised to me that this particular class was different from her previous as they really cherished their dollars and saved them up to get better items from the class store, instead of spending the dollars all at once. This approach had a lot of merit for the kids and it kept them on task because they knew that they were working towards earning something as well as progressing in their studies. I think it would be useful to see a practice like this used in a Scottish primary setting, as it would also interlink with the mathematic outcome centred around the importance of money management and budgeting (Education Scotland, 2016, pg. 94).

Also, whilst with grade 3, I attended the planning meetings that the teachers hosted between the grade levels. This structure in planning enables consistency across the teaching of the grades to occur, as the teachers plan in unison with one another. What was particularly evident was the breadth in planning: the teachers were not only looking at the lessons they were doing for that week, they were also very much looking into the future, thus emphasising the importance of mid-term and long-term planning in the profession of teaching, which I have discussed in my comparison of planning post in greater detail.

I worked with a particular group of 3rd graders when they went to either German/EAL, as I believed experiencing the work of specialists would also be beneficial for my practice. Within the EAL class, I saw an almost perfect practical example of the mixed-ability grouping working towards the benefit of learning for all students included. The teacher encouraged the exploration of English (as it is not the students first language). They do this by assigned roles that work towards creating a media product that demonstrates their findings in the language of English. This particular group had already made a 10-minute clip that included various scenes that explored what they had discovered about ancient civilisations (a topic that was also explored by the rest of grade 3 during Unit of Inquiry time): costumes of traditional wear, differing roles of characters (such as slaves, peasants and rulers) and lines of dialogue that linked with the periods they were exploring – ancient Egypt, ancient Greece and ancient Rome – which all culminated towards a product that represented the rich-learning experience of the children. The teacher even emphasised that this method pushed one of the boys, that had hardly any English at the start of the year, had came on leaps and bounds in the acquisition of language. Not only of the acquisition of the English language itself, but also the tone and expressions that came with the acting in the clip.

Now, the group is working through a unit of inquiry that is centred around the importance of endangered animals and the human impact on the environment. I worked with a group of boys that had a wide range of language capabilities, however, they were able to support one another effectively. We produced a soundclip presentation with photographs in an almost timeline fashion on animals that are extinct, to endangered then to vulnerable, whilst also involving the importance of understanding pollution and what we can do to help the planet. The boys took turns in creating their lines in English and aided one another in terms of what they were saying but also how they were expressing their lines. Not only this, but the group also brought forward the very current news story about Sudan, the ‘last man standing’ male of the white rhino population who died (Vitale, 2018). Not only did this evoke a passion within the group, but it also boosted my confidence to take a leap into constructing lessons that centre on the usage of technology to explore a modern topic within a group, especially with students that do not speak fluent English. I can say that the students I had in my class last year that were ESL students would have benefitted greatly from a practice like this because of the open environment created for the exploration of English. The boys were really chuffed with the product that they made, whilst the teacher was also impressed that they explored skills such as writing (for their lines), speaking, listening and reading whilst also working with technology. These skills normally need many separate lessons in other settings however this practitioner has found the perfect balance to ensure the kids in their practice are not only progressing in their language learning, but also having fun doing so.

To unpick this further with imagery proposed by the practitioner within the class itself, I believe the philosophies of Socrates interlinks with this approach well: Socrates’ mother was a midwife and he always saw this profession as an important form of imagery. The midwife is not there to handle the birth alone or to even give birth to the child itself; instead, they are there to guide the soon-to-be mother through the process, making sure they are on the right track. Teaching, in the eyes of the professional within this class, should follow the same method. ISS, as a whole follows this pedagogy also. Gone are the days of the overruling didactic approach to learning. The guide at the side approach is far more effective in the eyes of many of the professionals at ISS, as it spurs students to be far more autonomous within their learning, thus heading towards a clearer definition of what it means to be internationally minded. Midwives also are far more concerned about the on-goings of the labour suite itself and keep complex biological understanding further back in importance. Teachers are the same: students have to first be suitable for learning to occur in the first place before complex learning can be applied. Even then, the child in unison must make more groundwork with their teacher.

Wednesday was a much shorter day, due to the school closing earlier to host a data protection seminar on campus for teachers to learn more about the safeties of keeping information about themselves and their children safe and secure. A particular point that was very thought provoking was the emphasis that sharing information online is not the only main danger of information leaking. The example of a teacher losing the medical records of students whilst on a field trip was one that was very crucial, as within these documents are medical records, contact details, addresses and much more that could be dangerous within the wrong hands. Furthermore, the example of a report card being left in a printer could also prompt the likes of other staff members, parents and students to come across it and see what has been said about particular students. It is all well and good knowing how to be confidential online, but one must conduct themselves in real life in a confidential manner also. 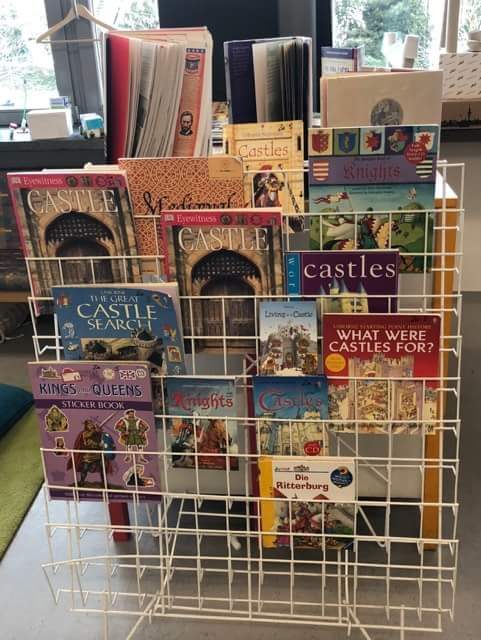 The various books that are centred around the Grade 2s UOI

Working with the grade 2s Thursday and Friday was also very beneficial for my overall practice, as I have predominately only worked with children that are further up in the primary school. However, I guessed that, before coming to ISS, that grade 2 would be aged similar to the UK as being around six years old. Instead, I was greeted by seven year olds, which made me realise that schooling in Germany does not begin until age six, which contrasts with the UK’s system where children must sit in a classroom environment from as early as four and a half.

I got to teach them about my Scottish heritage as their Unit of Inquiry has been the Middle Ages with a focus around castles. I was able to show the kids some of the famous castles that are across Scotland (with my local castles Broughty Ferry Castle and Claypotts Castle being two I knew a great deal about). Due to it being a grade 2 class, I also assisted in the building of the class’ own models of castles. It was so interesting to see this historical topic really explore and enhance the young children’s fine motor skills as they had to use tools such as scissors, Sellotape, glue, cardboard cutters and their hands. I liked to see a practical task link well with a topic that is also very knowledge-based. 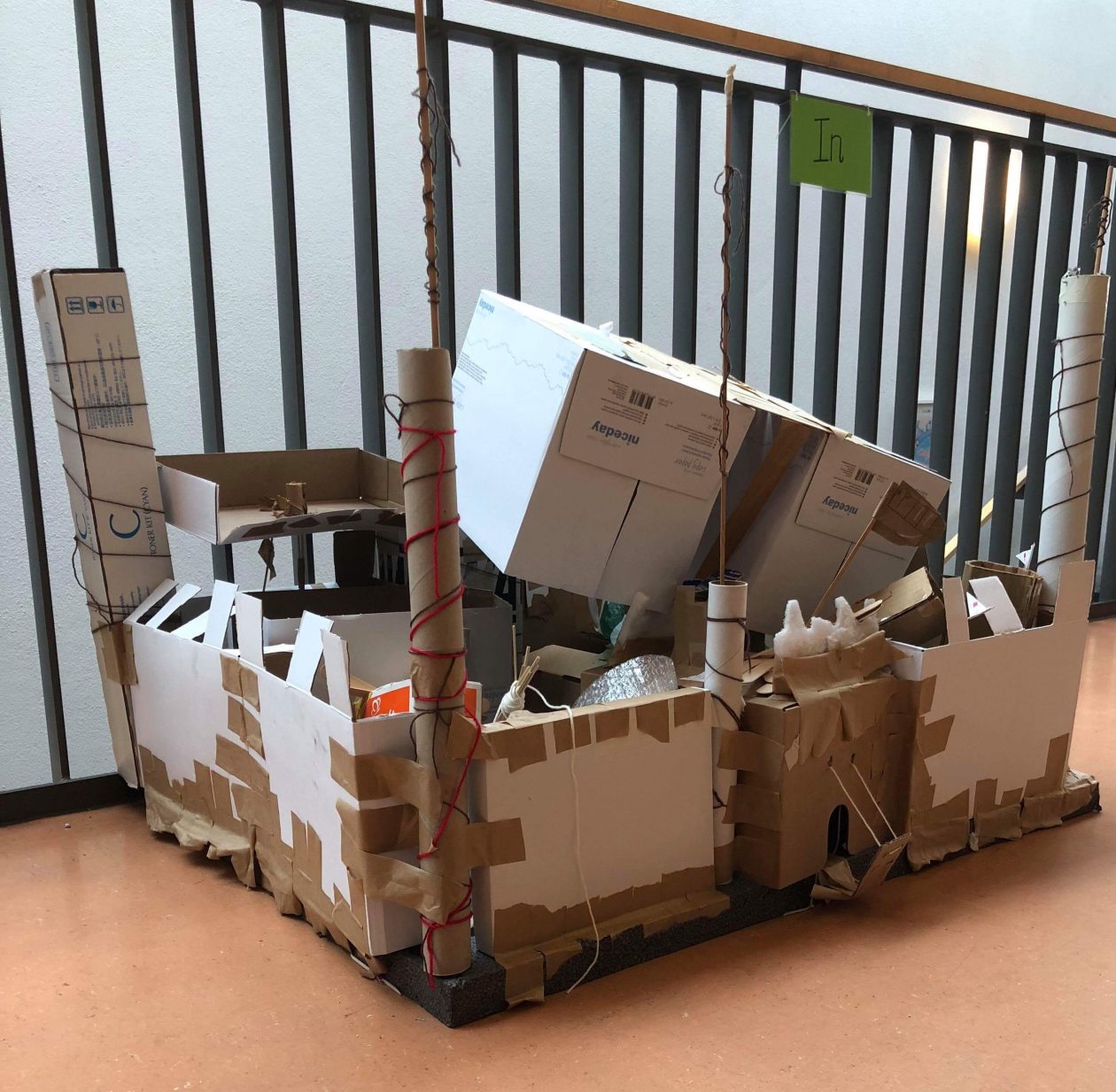 The children’s models are coming along really well!

Overall, this week has been packed with so many interesting events that have sparked areas of professional reflection within me. Even within the This week has also been particularly useful for my development as a practitioner as I have a unique position (which the staff at ISS have agreed and emphasised that I should take as much of the experience in as possible) where I am getting to see across the grade levels, interact with them and make reflections around the practices that I have witnessed, which will no doubt shape my own understanding of what it means to be a successful teacher.