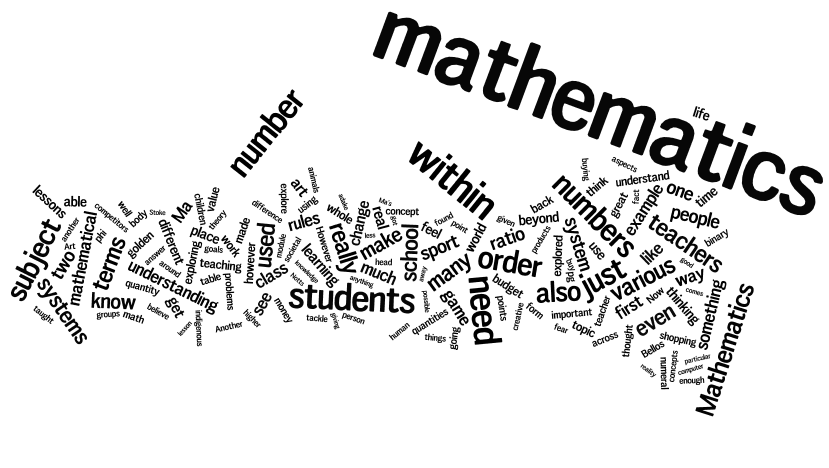 Semester 1 of second year is nearing its end and we are all preparing for our assignments and exam. I am deliberately taking the time away from the heavy studying to reflect upon the learning I have gained in the Discovering Mathematics module as I think it will be beneficial to create a short final reflective post of all the things we have gained from the elective.

Firstly, I have to say that my entire perception of Mathematics has changed drastically because of the relaxed environment that we were within when experimenting with different mathematical concepts (something that was alien to me, as my main experience of maths was to study it in order to pass an exam to gain a qualification). Bello (2010), fittingly describes this re-awakened awareness one gains when relearning maths in adulthood:

“Entering the world of maths as an adult was very different from entering it as a child, when the requirement to pass exams means that often the really engrossing stuff is passed over. Now, I was free to wander down avenues just because they sounded curious and interesting.” (Bellos, 2010, pg. 10).

I felt that we were all in the same situation in terms of our perceptions in maths because, for the majority of us, our last experience of mathematics was within an exam hall. This module gave us the opportunity to step away from a regimented formulae-based learning to the subject and gave us various areas within wider society in which mathematics played an instrumental part to.

I had my own discoveries within mathematics this year:

Looking ahead, I am definitely going to view my future maths lessons with a finer eye for depth of what I can provide a class in terms of fundamental mathematical knowledge (as I have done with a reflection of previous math lessons I did during my first year placement). As practitioners, we have a huge responsibility in teaching mathematics because it is one of those touchy subjects where people can disconnect from it after one too many bad experiences with it during childhood.

Wider societal links, on top of a strong foundation of basic ideas within mathematics can set a student up for life in terms of their capabilities within the subject of mathematics, because context can widen one’s appreciation for a subject within the real world.

Furthermore, I didn’t come into the elective with any real irrational fear for mathematics; however, I did have an issue with doubting my calculations. Having openness about mathematics makes it far more easier to take a mistake as what it is: a simple error that can be corrected. I want to be able to establish a classroom that has this embracement of both our success in life and our shortcomings too.

Overall, Ma’s (2010) studies in mathematics has tied in really well with the premise of the Discovering Mathematics module, as we ourselves have expanded our mathematical horizons to see the subject in a new way just as her comparisons between China and the USA’s teachings had helped her come to a realisation of what makes a really worthwhile experience within mathematics.

To finish off my blogging for Discovering Mathematics, I collected all my blog posts and put them in Wordle to see what the most used words I have written during my ventures in maths. My favourite part of the wordle is probably the fact ‘mathematics’ and ‘life’ are almost in a pairing off at the side, which shows that human life and maths coexist to support one another. Without maths we would struggle with our day-to-day activities. We wouldn’t have any of the advanced technology we have today without someone being creative enough with numbers. ‘Students’, ‘teachers’, ‘numbers’, ‘subject’ and ‘systems’ are really at the forefront and are most prominent, however underlying them are the terms ‘art’, ‘beyond’, ‘shopping’, ‘important’ and ‘different’ to name a few, which I believe to be another fitting form of imagery. We might have the structuring of mathematics being the first thing we think of, but if we delve deeper we can see how far the roots of mathematics grow within various topics and how deep they can go. Finally, I like that students found its way neatly in the centre (almost like a nod to the child-centred approach), as it is the students that need to be thought of first and foremost.

The future looks far brighter for my practice than it did before starting this module, and for me, that is the best result I could have gained from any experience with mathematics.