The sport industry is a huge sector in the market that people enjoy watching, participating in and involving themselves in someway. There is a sense of community with playing or being a fan of a particular sport which is crucial for people (children in particular) and their physical and mental wellbeing (Croddy, 2013). For our first task in exploring mathematics within sport, Richard wanted to show us the mathematics that goes into representing data of sport results.

We were given the first ever-recorded league table of football that was held in England in 1888 (Wright, 2016): 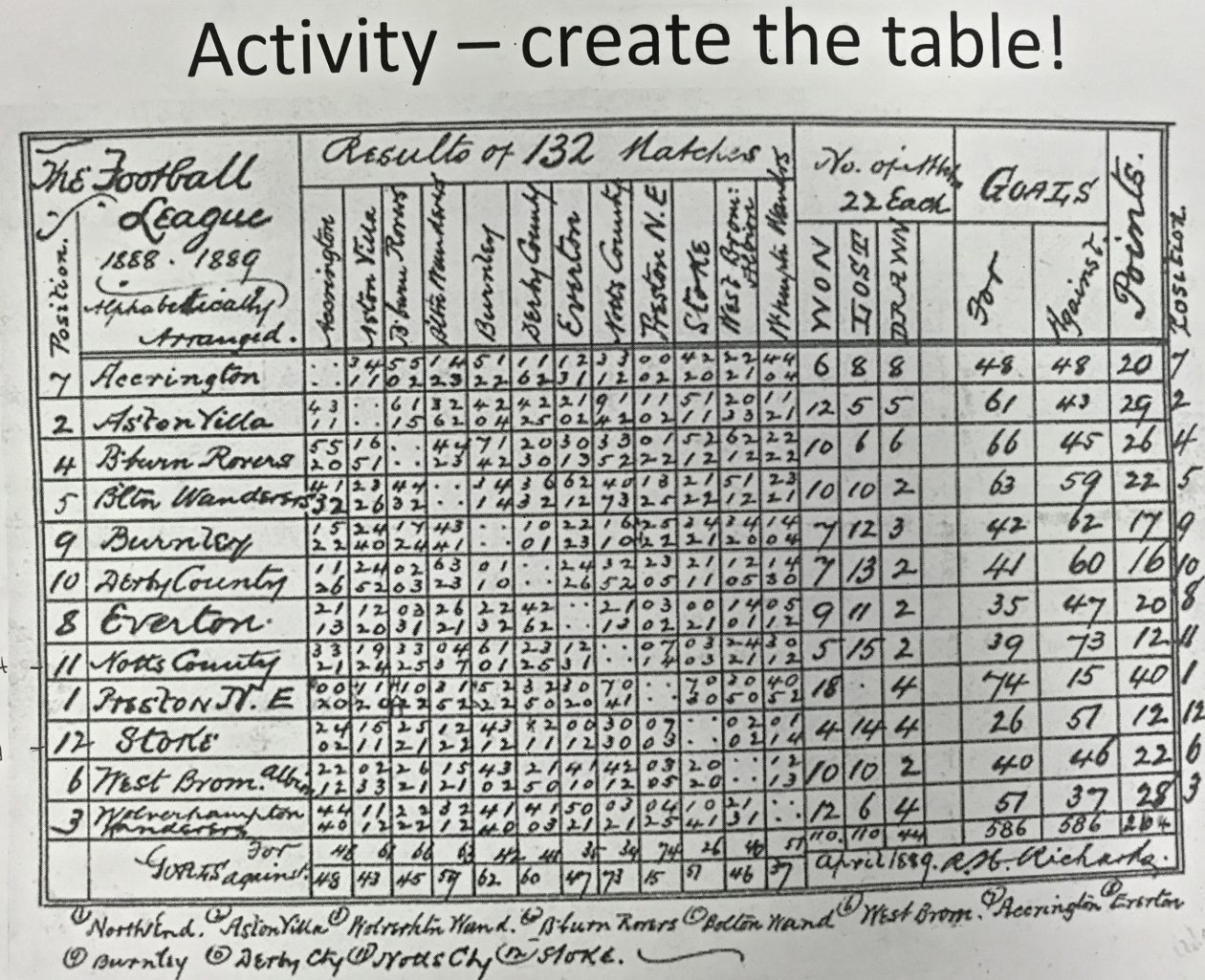 The first league table recorded for football in 1888. Can you see the differences between today’s recordings?

Now, we had to look at the current league tables of today and try and represent the original data as if it was held today. The clear differences were that the table of results was arranged in alphabetical order, in contrast to our current position-in-the-league formatting, which allows for easy distinguishing between who is on top and who is on bottom. This is what we created: 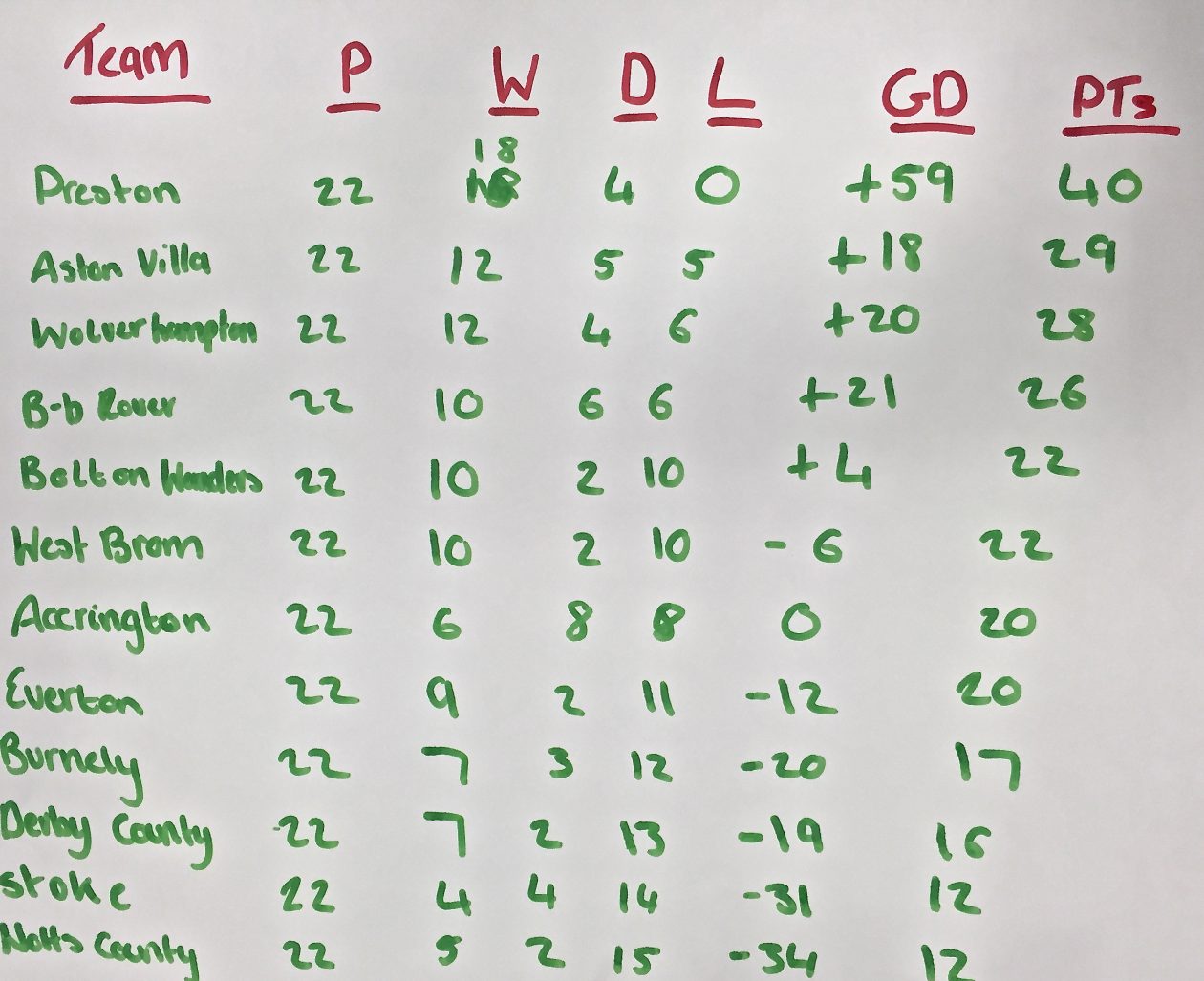 Another discovery that was made that, using today’s rules of scoring and goal differences, we placed Stoke 11th and Notts County 12th because they had a better goal difference of -31 to Notts’ -34. However, in 1888 it was Stoke that was at the bottom… How could this have been?

Well, the explanation showed us that rules within sports have progressed and developed as time has passed. Previously, the rule was that (prior to goal difference) the team that scored more goals against their opponents overall were higher placed in the league. With Notts having 39 goals over Stoke’s 26 it was clear why Stoke wasn’t so lucky back in 1888. Now, exploring mathematics further, we can see that representation of data is crucial within sports, because it can make the difference between rankings.

Our mathematics was correct when we changed the ranking between Notts and Stoke, because we calculated the difference in goals (number of goals scored – number of goals conceded = goal difference). This measurement and rule did not exist in the 1880s football therefore the overall result was totally different. It wasn’t until the 70s that the concept of goal difference was made official when ranking teams in a league.

So, the next task we were set was to do our own development of a particular sport and see what the mathematical consequences would be if we changed and adapted particular rules or layouts.

1 vs. 1 matches that are normally fought in a square ring.

You gain a point for a punch, two for a kick to body and three for a kick to the head. People are placed in divisions depending on weight.

Points can be lost with warnings for illegal activity. 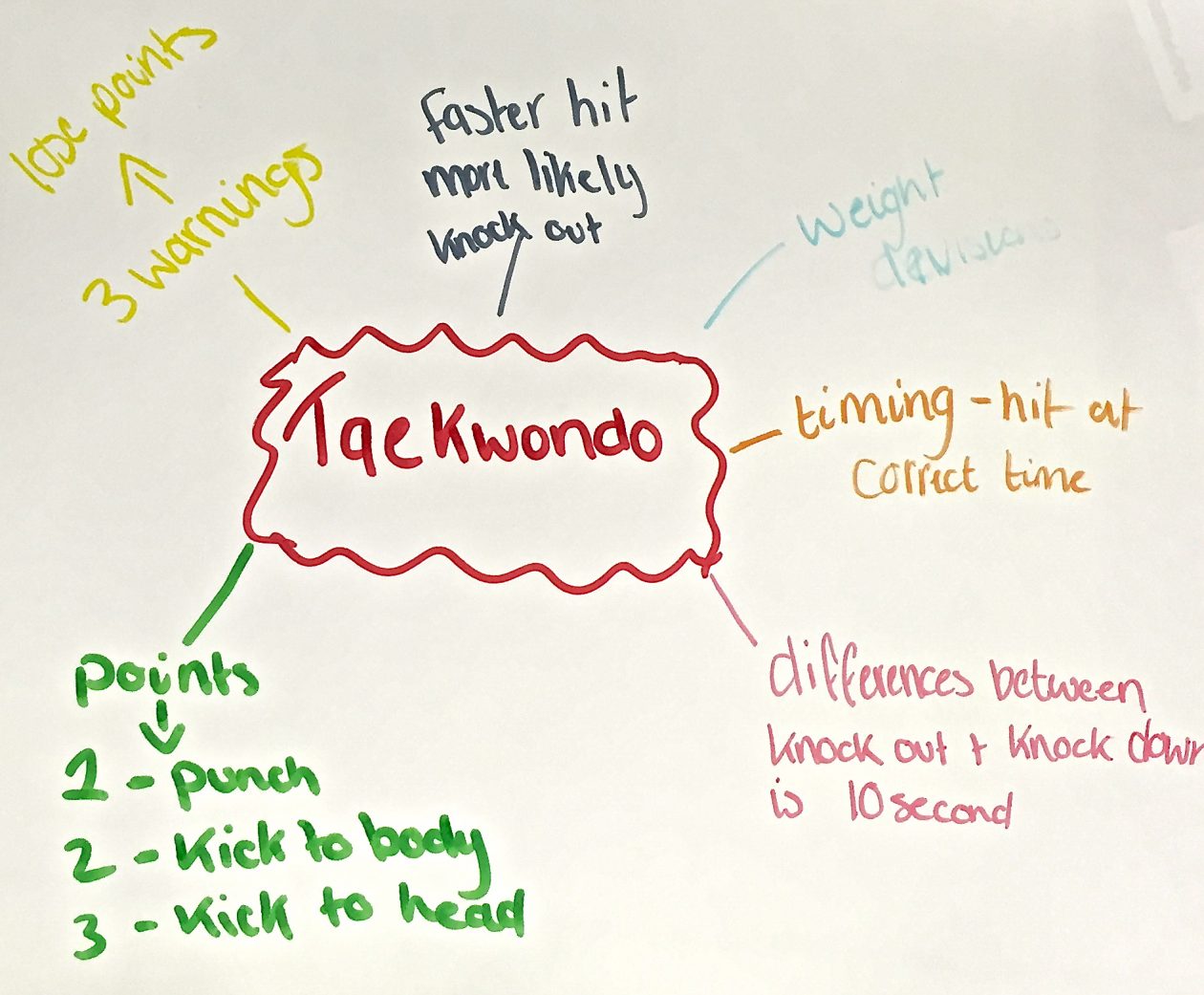 The rules of Taekwondo

We decided to think about the size of the ring: giving competitors a smaller area to compete in means there is less space for them to avoid their opponents and try and waste time. We even thought about descaling the ring each round, in order to establish more pressure to the game, which could alter the performance of the competitors, thus possibly changing the outcome of the match with competitors breaking under the pressure due to the mathematics of the game becoming psychological (Bellos, 2010). We also thought of introducing different height divisions, as weight doesn’t have enough of a variable of competitors. Having competitors fight with equal stature could make the game fairer because they don’t have to fight someone much larger or much smaller than them in height. On top of the possibility of adjusting the size of the ring, we thought of decreasing the times per round, so that fighters have less amount of time to amass points against their opponent.

To change the game entirely, we even re-assessed the points system and allowed for more variables in the types of hits that can count towards points:

Another outlandish suggestion was making fights of doubles! 2 vs. 2 would add in 2 extra players into the match and would drastically alter how the sport was played. Other rules would also have to be enforced in order for fighters not to target just one person, for example. We even came up for a name for this new breed of taekwondo – two-kwondo. It evoked similar connotations to the matches held in the World Wrestling Entertainment (WWE) matches with tag teams. 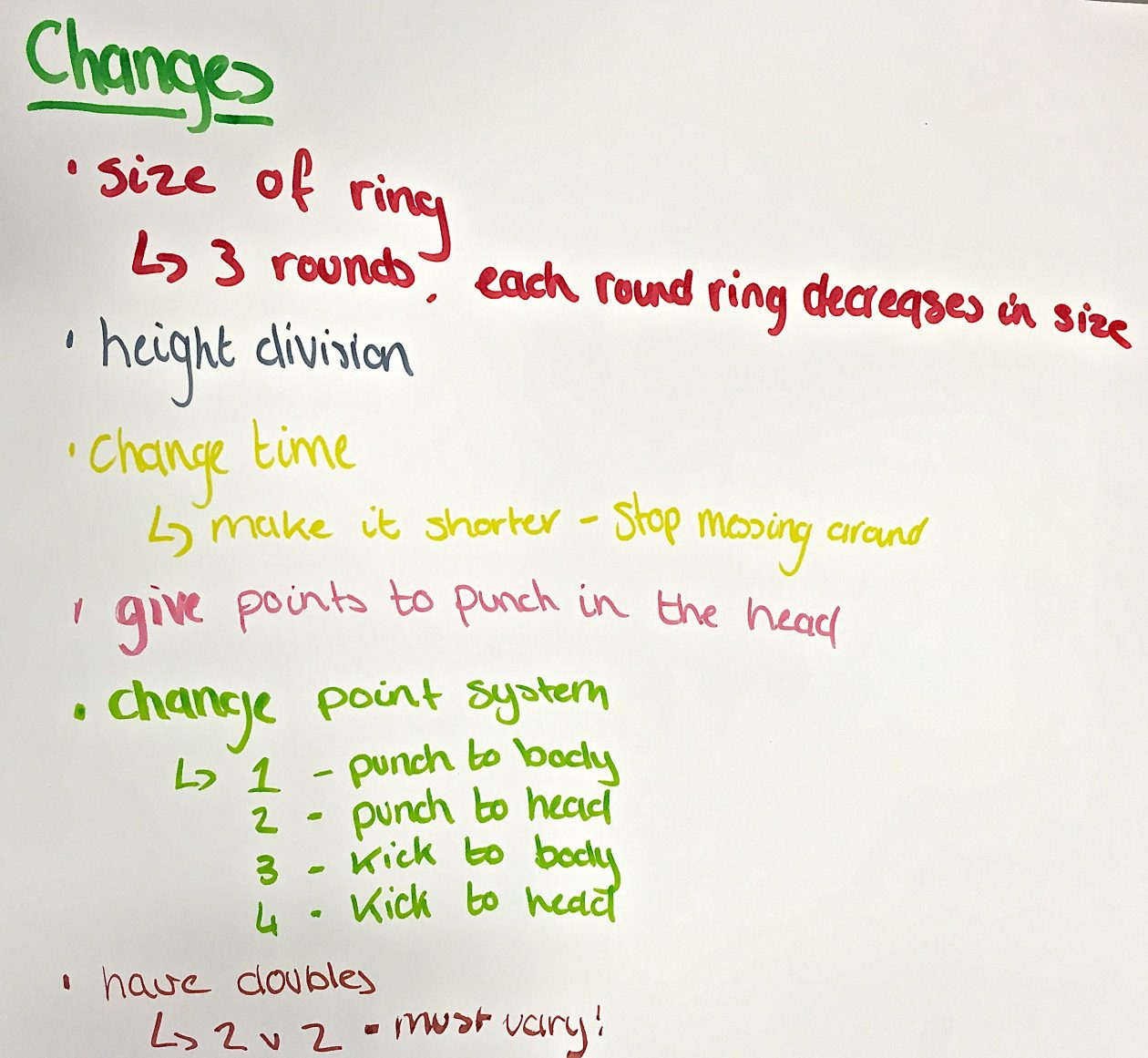 Some of our outlandish changes of taekwondo. Some really got us examining the core mathematics within the martial art sport.

Overall, what we were doing was examining the rules and variables that make up a sport and how altering even just one of the variables has a drastic change on the outcome. This could be correlated to conducting science experiments because we were hypothesising what the changes would do to the results and thinking about how drastic a change could be on a sport. This further emphasises the points made by Ma (2010) where she believes that mathematics cannot be viewed in a singular way, as it impacts various areas of life (in our case, sport). This can also represent the avenue of multiple perspectives as we had to examine the variables we had changed and be critical on whether the changes would be beneficial to the sport, or whether they’d hinder the game just as you would in examining the different procedures in calculating a mathematics problem.

This creative way of examining sports could be an interesting way for children to pick apart the rules of their favourite sports and see the various mathematical concepts that are used to determine the rules of any game. I think this would be far more interesting and context-based than using textbooks to reinforce formulas and skills.

Ending this post, I feel a lot more enlightened in terms of mathematics in sport. We can go beyond just thinking about how points are earned and actually think about the parameters of specific rules and the layout of the environment a sport is held in.

Wright, Chris (2016) On this day in 1888, Preston the big winners as first ever football league results recorded [Article] Available at: http://www.whoateallthepies.tv/retro/243184/on-this-day-in-1888-preston-the-big-winners-as-first-ever-football-league-results-recorded.html (Accessed 11th of November 2017)

1 thought on “Two-kwondo: Breaking Down Maths in Taekwondo and Sports”