Coming back to university after the Christmas break, I’ve made a few New Years Resolutions and two of them are really important to me: one is to cut back on the biscuits and the other is to keep up with the blog. Healthy body equates to a healthy mind and as they say, ‘new year, new me.’ Reflecting on the previous year, I think we can all agree that 2016 was nothing short of a phenomenon – both positively and negatively for mankind, as we know it.

However, in light of the many political controversies and celebrity deaths, I want to explore more on how we have survived as a species on this planet and how we have positioned ourselves as the powerhouse organisms of the Earth. Going into teaching, you’ve got to be open to constantly learning new aspects about the world in order to progress as active learners and professionals. We need to go beyond just taking things on face value and ensuring that we enthuse others to question what we are told in the media.

Christmas was full of indulgence for the majority of our population, myself included. The rush of shoppers to get presents, food, decorations, wrapping paper, refreshments and so on continues every year. It’s the tradition for many. One question that stuck in my mind, whilst being hurried through the aisles in the shops for sweets and shortbread, was how does it all come to be? We are so dependent on large supermarkets to provide us with fresh fruit, vegetables, meat and confectionaries everyday. Every. Single. Day. Christmas day is only one that has heightened importance in our consumerist eyes. 2016 was no different and 2017 will be just the same when it nears December 25th.

We never really take a stand back to delve deeper on how these giant, industrial food chains exist and I think we need to question if they are sustainable for mankind. We are almost blind to the work that must go into getting fresh fruit and veg to the shelves.

An interesting documentary produced by the BBC saw Dallas Campbell explore some of man’s greatest creations in our modern world. “Supersized Earth” is the inspiration for this very post as it answered many of my questions about our understanding of agriculture and how science is being used to meet the demand of the ever-expanding populations across the nations.

Campbell travels the globe to find examples and sources of food, water and energy. They were nothing short of extraordinary: Cattle farms in Brazil filled with genetically enhanced ‘super cows’, the world’s largest 175-turbine offshore wind farm and the famous American landmark of Hoover Dam were just a few of the colossal constructions that we have set up as a species in order to survive and fight the complications of nature. Our expanding knowledge of technology means we can live in even the harshest of conditions. Like the rest of the animal kingdom, we are evolving and adapting.

One aspect that was really astonishing was the greenhouse farm of Costa del Sol. When we think of greenhouses, we imagine something along the lines of small, glass sheds hosting laborers who have great green fingers producing carrots, tomatoes or potatoes in their own garden or allotments. However, we couldn’t provide the 64 million people of the UK with enough crops from the simple gardens of suburban horticulturists.

Costa del Sol takes it to the extreme: 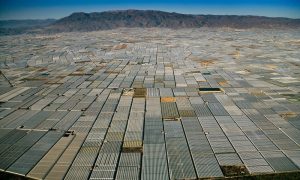 “A shimmering sea of polythene has consumed the small coastal plain of Campo de Dalías, some 30 km southwest of the city of Almería in southern Spain.” (Geography Field Work, 2016).

These polythene constructions allows for tomatoes to be grown beyond the constraints of Mother Nature herself. The tomatoes aren’t even grown in soil as it slows their development, which hinders the tight profit margins. It’s even been nicknamed ‘Costa del Polythene’ because of the huge concentration

of greenhouses in one area. Around a ¼ of all the tomatoes produced end up shipped into the UK all year round. Yet, Costa del Sol is more famous as a holiday destination by many, proving our naivety of where our food really comes from. Tourists on the Spanish beaches have no idea of the real connection they have with the small region.

Farming was once filled with the challenges we had to accept with nature, however, we are now tackling it in order to compensate with the high demand of man’s need to eat. Growing population means more mouths to feed so more crops have to be produced. More crops mean more profits to be made for big business like the supermarkets that sell the crops. The cycle of business and agriculture is placed on a grand scale.

It would be great to try and incorporate these agriculture feats within classes in order for kids to learn about where their food comes from. We could show them how impactful the manmade constructions are to our planet and their lives. So much is going on with mankind and children within the classroom have the potential to have an impact on the agricultural industries across the world. Furthermore, the agricultural sector crosses over so many different subjects within the curriculum. Science, social studies, technologies and even mathematics are some of the subjects where the farming concept could be established in a classroom environment.

So, I’ve been able to come into 2017 a little bit more enlightened, a little bit healthier and, with a continued enthusiasm to learn.