This week in integrated arts the lecture was focused on the use of stimuli to engage with the arts. We talked about how over the years is composers often using poems and/or pictures to help create their work. One example of this is the poem Tam O’Shanter by Robert Burns lead to the composition by Malcolm Arnold, we listened to this in the lecture and you could follow the generally story by the changes in tone and speed of the music, we could get the idea of what was going on throughout the poem. This shows that music can be cross curricular it connects to literacy in terms of the writing of the poems also art as the series of paintings or drawing that can follow a piece of music or the poem depending on what order the class goes through the topic.

In the music workshop we started off by listening to five different pieces of music and we all wrote down one word to describe how we felt while listening to them. Most of the class had the same general reaction  to most of the pieces of music but there were a few in the class that had surprising feelings towards music. The piece of music I found sad and heart-breaking another in the class felt it was more of a romantic feel to it. Another was a song that was very cheerful and said happy in it, but a few felt it was annoying because of the whistling and snapping though it. It makes you think that different people can’t have different reactions and feeling towards the same music. This is why different people have different tastes in music and as long as everyone respects everyone else’s opinions then it doesn’t matter. After we did this and discussed our answers we then listened to a long piece of music and  was told to make a story board that had eight pictures and make them follow the tone and changes in the music. Our story was about a scuba diver and a whale. With the chase scene going along with a speed up in the music, and the decent of the music as if the scuba diver was being swallowed and going down the whale’s throat. I feel like our story board followed the music well and showed all the changes. i think that this experience and outcome links well to the first task we completed today showing our feelings towards a piece of music, ” can respond to music by describing my thoughts and feelings about my own and others’ work. EXA 0-19a.”  I have attached a photo of our story board bellow. 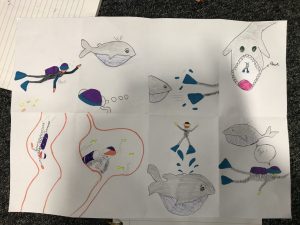 In the Visual arts workshop we went back to our painting we had done the week before with our handmade paintbrushes. We went back over our paintings with pastels to try and improve this was to show us that a piece of art work doesn’t have to be done after one input you can go back in and back over a piece of work to improve. My painting drastically improved when I used the pastels, I have attaches bellow picture before and after this workshop and also a short video of me talking about the drawing. My painting improved as I was able to put more detail and depth into it with the pastels than I was able to with the homemade paintbrush which made generic strokes. This also makes me remember when I was younger, and you aren’t very specific with art and then as you get older you start to add more detail and depth. This is explained in McAuliffe (2007)  “children’s artwork tends to progressively demonstrate closer attention to detail … the base line disappears, and depth is represented by a variety of more complex methods, including the overlapping of form.” 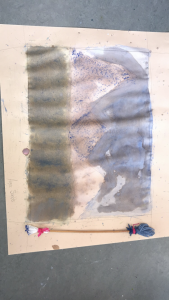 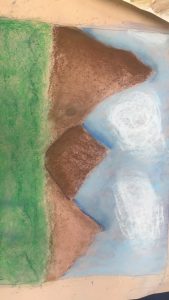