Today I explored my communication skills in an outside environment, and was given the task of building a den with members of a team. Group and leadership Within my particular team I did not feel that there was a specific … Continue reading →

Today I explored my communication skills in an outside environment, and was given the task of building a den with members of a team.

Within my particular team I did not feel that there was a specific group leader, although there were a few team members who were perhaps more vocal than others at suggesting ideas.  We worked well together and managed to agree on individual suggestions relatively quickly. I feel that all team members were able to voice their ideas and everyone listened to one another respectfully. We all had a clear idea of the design of the den and a similar vision of what it should ultimately look like. As the den took shape, we were enthusiastic and this made it feel fun, we had plenty of laughs along the way. I didn’t feel any resentment within the team and we encouraged each other to get involved as much as possible. The most challenging part was communicating with the team members I didn’t know very well. I found it far easier to communicate with team members I already knew as I had an idea of what their strengths would be in this task.

The group who were explaining their task did so very well.  I think this was due to one specific member being chosen to talk, instead of different members trying to communicate at the one time.  This kept their communication clear and concise and meant that all aspects of the task were communicated in a logical manner. A number of people did state that planning could have been better, that most members rushed into making the den, and that planning  happened as the den evolved.

Being outdoors is a wonderful setting for learning as it keeps things relaxed, informal, and provides a change of environment for learners who may not ordinarily perform well in a classroom situation. I felt that students in this task came to life and were perhaps more outspoken than usual.  Being outdoors also provided an opportunity for everyone to communicate as freely and loudly as they wanted. Communicating outdoors is more challenging than indoors due to natural noises and distractions. Our group appeared to be distracted by the team members working close by and also by birds and dogs making the odd appearance.  We chose to build our den within a group of trees, which was nicely sheltered from wind and did make it easier to hear each other talking, although we were talking far more loudly than we normally would indoors.

Negotiations were unsuccessful and I think this was because the teams felt like a tight unit who had all contributed to the den building, and were therefore not willing to compromise on anything which was their own hard work.  There were plenty of offers made for various parts of our den which were declined, and we had all agreed early on that we were not willing to trade anything because we were all so pleased with our end result. I found it challenging to continually decline offers when other members were communicating well and in such a friendly manner. 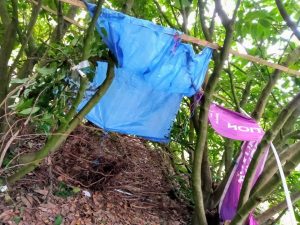