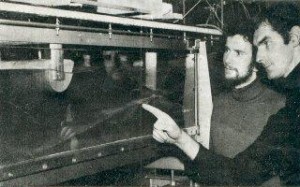 Professor Stephen Salter, has won the Scottish Government’s inaugural Saltire medal in recognition of his role in the development of marine energy.

Prof Salter led the Edinburgh University team that designed the first device – known as “Salter’s Edinburgh Duck” – to generate electricity from waves in 1974. He is often described as the “founding father” of wave power technology.

Professor Salter is now an advisor to Aquamarine Power.

Publish to the blog

Receive email updates from this blog.