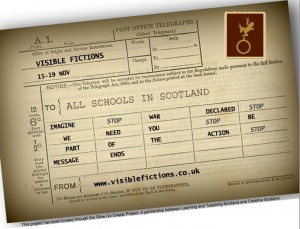 Over a week-long, intensive period, pupils watched five online dramas (webisodes) telling the story of a fictional country in a state of emergency caused by civil conflict.  The webisodes were watched at the start of the school day and stimulated debate and cross curricular activities relating to themes of war and conflict throughout the rest of the day. Schools developed their individual approach, supported by a teaching artist to help inspire their State of Emergency journey. Glow was primarily used by teachers and teaching artists to share ideas in preparation for the intensive week period.  Glow was also used to host and show the webisodes. All seven schools participated in a Glow Meet at the end of the week to discuss the activities and learning they had experienced. 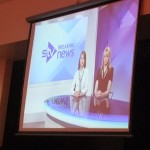 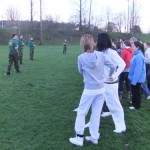 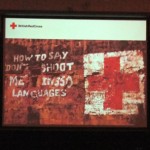 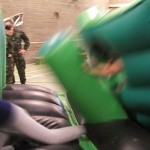 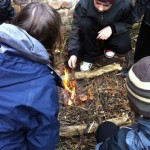 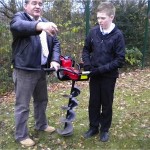 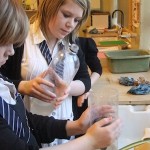 ‘The webisodes gave a focus for a number of projects that were developed ‘in-house’. This created a unique opportunity to work with S2 pupils over an extended period. They were all fully engaged and contributing well to lessons. They could see the link between subjects and the last day activities brought all they had learned throughout the week to a conclusion’.

In November 2010 the entire S2 year group in the seven schools came off the normal timetable for one week and took part in ‘State of Emergency’.  This project created a virtual world through four online dramas (webisodes) which documented the lives of a group of teenagers caught up in civil conflict.  The pupils were asked to become involved in the decisions and dilemmas faced by the characters to better understand the consequences of war.

In preparation for the intensive week school teaching staff were supported by a team of Visible Fictions teaching artists to create resources through the Glow network, linking up with other schools across Scotland.   The project encouraged teachers to creatively enhance all curricular areas and Visible Fictions supported them to find the right approach for their subject and explore how it could link with other curricular areas through the themes of war and conflict.  This structure means the skills developed during the project will remain within the schools with the prospect of the project being delivered by the staff teams for the years to come.   Examples of classes were: 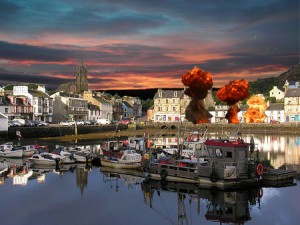 Teachers, or Head Teachers, were involved extensively in planning how the project would look and work in their particular school and within their subject area; developing activities and resources to be used during the intensive week; and finally, delivering the project.  The input in terms of planning time for teachers was quite extensive, representing between 11-20 hours for most teachers, although less for others. In a number of schools, teachers from all subject areas involved met together to do the planning along with senior management; in one school, the Head Teacher was the main person involved in planning activities with the teaching artist and with Visible Fictions – this resulted in subject teachers at the school feeling detached from the planning process. Teachers were guided throughout this process by a teaching artist, assigned to each of the seven schools – their role was to support teachers to think of creative, innovative and active activities for pupils to take part in which covered and cut across each area of the curriculum.

Pupils were not involved at all in planning, and to a very minimal extent in project delivery – this was crucial to the success of the project, to build suspense and excitement amongst pupils and keep them guessing about what every day would bring.

As a result of how the project was planned, there was significant variation between schools in terms of how ‘‘State of Emergency’ was implemented within their school – some kept time-tabled subjects, but ensured each addressed or related to war and conflict-related themes; other schools came completely off-timetable for the whole week and had a very active, fluid week of activities related to the project’s themes. Schools were encouraged to communicate with each other throughout the planning process, via Glow, to share ideas and resources for different subject areas. 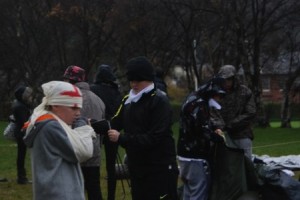 How was Glow used?

‘State of Emergency’ used Glow in the following ways:

‘I used Glow to look at different schools and what their plans were for State of Emergency and how they had responded to it.  As staff in HC created their own lessons and put them on Glow I was able to work with some of the ideas to help create my lessons.  Some issues were resolved by software issues in the authority and we now have a template for what is required in a glow computer so that all areas can be used.  Getting into the site on a regular basis made me feel more comfortable with it, by finding a few hints and shortcuts it made me use it more’. 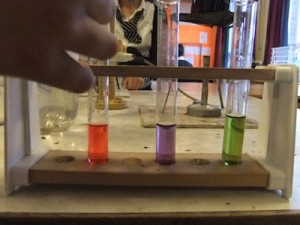 ‘I was perhaps the most negative of all the members of the English department about the State of Emergency project; however, the pupils themselves have completely changed my mind. Their conduct and attitude over the course of the week has been phenomenal and the work they have produced is outstanding. They have truly blown me away!’

The majority of teachers involved in the evaluation found ‘State of Emergency’ to be a ‘very useful’ teaching resource; only one teacher said that they had not found the approach to be useful. The majority of teachers also felt that ‘State of Emergency’ had had quite an impact in terms of improving pupils’ engagement with classroom activities; some felt the impact was significant.

For all teachers, using the dramas portrayed in the webisodes as a basis to drive curriculum activity for a week was a completely new approach to learning and teaching activity. Although one teacher felt things could have been improved by some live interaction with the actors playing each of the characters. Teachers felt the webisodes were of very high quality and that they offered a unique focus for the week, exploring a range of interesting and inter-disciplinary issues which allowed teachers to plan and link related activity across all subjects of the curriculum resulting, in some cases, in a truly inter-disciplinary learning experience (to varying extents in each school).

Other approaches such as taking a whole year group off-timetable to such an extent represented new approaches to teaching for some schools; others said they had come off time-table before for whole year group activities, but that this had not been on as ambitious a scale as with ‘State of Emergency’. One teacher commented that having the whole year group working so closely together for a full week helped pupils learn a lot about each other, including each other’s strengths and weaknesses and how best to work together.  While many schools had used some form of active learning/task-based approach to teaching in the past, this had not previously been done to the extent managed during ‘State of Emergency’ week.

A few teachers said the project represented a new approach to working in partnership with arts organisations, artists and other external bodies, which felt more collaborative and creative. Schools felt having a dedicated teaching artist to support all their project planning and delivery gave them confidence to realise their ideas and be more creative – there was a sense that the teaching artists were able to inspire teachers and also to encourage them to be more ambitious in their plans. One teacher commented that the project had made teachers in the school realise how innovative they could be and that the teaching artists had helped generate ideas and let the teachers take them forwards. 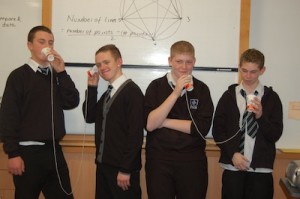 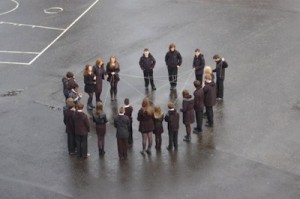 ‘Many of the pupils talked about other lessons and activities. They also commented on their relevance to the theme. Some realised that in a real SoE things would be very different.  The science water purification was treated with far more seriousness as the students could see the relevance, as was the creation of a protest song and the repeating of the scenes for videoing’.

All teachers consulted felt ‘State of Emergency’ had had a positive impact on pupils’ learning experiences, and had opened them up to new types of learning experiences. Teachers also said that the project had demonstrated to pupils how fun and interesting learning can be.

A number of schools noted a small increase in attendance, improvements in behaviour and reductions in punitive exercises carried out during the intensive week period because, as one teacher put it, “pupils were busy and engaged with new stimuli to motivate and enthuse them”.

Pupils’ participation in ‘‘State of Emergency’ ’ supported them to develop the following new skills and knowledge, much of which would be helpful to them in the future, particularly in terms of helping them think about career paths they might follow:

Pupils felt the Co-Create project had helped them think about a number of things very differently and also about things they had not thought about before, such as:

The project also helped pupils develop their presentation skills and confidence in presenting, as during the week they had to make presentations to small groups, to the rest of the school, and to the other participating schools via Glow Meet. Teachers also felt the project had been successful at promoting leadership skills amongst pupils due to the many opportunities for different pupils to lead different groups and activities and be supportive of others.

Pupils described the week as mentally and physically challenging. They would all like to participate in something like this again, primarily because of the physical and active learning the project promoted.

The project enabled pupils to learn in a very active, task-based and inter-disciplinary way which the majority engaged very well with. It was also highly effective in promoting independent thought and debate around significant issues related to war and conflict.

The project supported a greater appreciation for how curricular subjects interact and crossover and the relevance of each. It contributed significantly to all of the capacity areas: 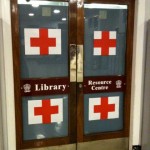 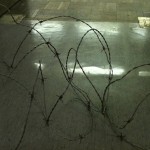 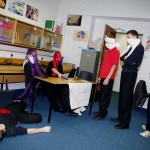 As keen proponents of arts based active and rich task-based learning, Visible Fictions used the Co-Create opportunity to test out their aspiration to use the arts as a way to promote and create a genuinely inter-disciplinary, exciting approach to learning, designed to actively engage all pupils, even those schools which sometimes struggle to engage. The successful completion of the Co-Create project gave them the opportunity to pilot this approach and has given them confidence to pursue similar ideas of such an ambitious scale within schools in future. The success of this project will allow them to persuade other schools to participate in similar activities.

Other outcomes for Visible Fictions include:

Learning from the above, future delivery of the same or a similar project would include:

Generally teachers, teaching artists and Visible Fictions were in agreement that the partnership model adopted by the project was effective. Having a teaching artist in each school meant each school had tailored support and a key person to contact; it also meant schools could adapt the ‘State of Emergency’ approach to best meet the need of the school and pupils and build on the strengths and resources locally.