The Giant Gaelic Arts was developed as the result of collaboration between the Cultural Co-ordinator, the Head Teacher of Kirkstyle Primary School, the P3 class teachers and 2 artists. The lead artists, both Gaelic speakers delivered 8 workshops sessions in school where together with pupils, they explored how to extend the pupils’ Gaelic vocabulary by using the traditional Gaelic story ‘Two Giants’ as the theme. Each class was introduced to the story, created their own storyboards, made ‘giant’ puppets and props and learned two Gaelic songs. Artists communicated with pupils in Gaelic throughout the project. 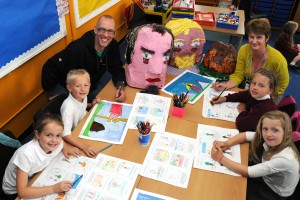 The workshop sessions culminated in a final performance of the story, embracing visual arts and language elements of the project, and designed to convey pupils’ own interpretations of the traditional story to their school and parents/carers.

In addition to learning and consolidating new Gaelic vocabulary, the project was designed to introduce young children to the rich and diverse cultural life of Scotland in a creative and inspiring way. 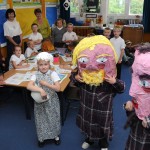 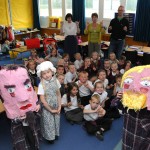 Follow up conversations with the class teachers confirmed the project had an effect on pupils as the following quotes demonstrate:

“The children were involved in this project from the very beginning. Eoghann (Lead Artist) read them the story ‘An dha fhuamhaire’ which immediately held their attention and then they demonstrated to him their own knowledge of the Gaelic language. Using the different medias to retell the story, such as the storyboards and creating the giants, giant pies and props allowed the children to take ownership of the project and bring the story to life.” (P3 class teacher)

“The songs Mary McLeod taught them slotted in to the play seamlessly and the children decided to add their own favourite ‘Brocham Lom’.” (P3 class teacher)

“I was nervous being on stage and speaking Gaelic but it was great.” (P3 pupil)

“It was great fun mixing the paint to make the flesh colour for the giant’s faces. I didn’t think you could add blue and yellow.” (P3 pupil)

“I enjoyed working with the other class and being in the play and making people laugh I‘d like to learn more Gaelic.” (P3 pupil)

“The children from both classes have benefitted from being involved in this rich, unique and interactive experience from which they have gained confidence, a variety of skills and have extended their vocabulary in a fun way which is indicative of CfE” (P3 class teacher)

“Cross curricular, multi-discipline, bi-lingual projects such as ‘An da fhuamhaire’ come into their own when the class teacher and school staff become engaged and bring their skills and knowledge into the creative process. It is a partnership and this project was the perfect example. It was a real pleasure to be involved with. The kids were magic and really shone.” (Lead Artist) 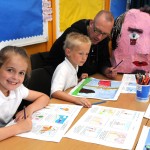 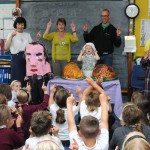 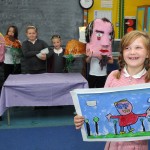