I very much enjoyed the beef and cheesy tatties we had for dinner last night. This morning we awoke to pancakes so that made me very happy indeed. I’m going to miss the food here a lot! 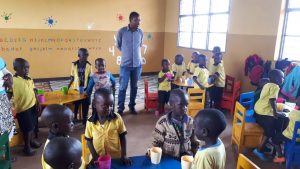 It was back to Bumbogo today. Jean took as to a satellite primary school that is in progress. It’s about 3km from the main building and they were finding that kids from that area weren’t attending school. The building of a new school was the solution and so far it has p1 kids (aged 4-5). We introduced ourselves to the three classes (~80 in a class) while they were on their tea/porridge break. In the third class I played some fiddle and wandered up and down the isles, sitting next to the kids from time to time. They seemed to be amused by the sight of the hairy man strolling round the room while playing an instrument they’d never seen before! 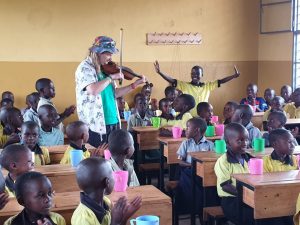 Afterwards we visited a special building for kids with disabilities. It’s common for families with disabled children to be ostracised from the community so this was about helping the kids but also their families. There’s a strand to the project whereby the mums are trained in various useful skills in order to help bring some cash in. The families we met were lovely and I could see how much they’re gaining from being involved. 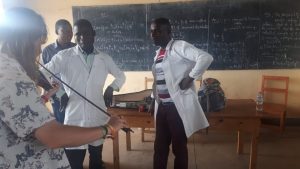 While the KHS pupils played with the Bumbogo kids, Jean and his colleagues met with me, Suzie and Gillian to discuss the various extra clubs that run at the school. They have a Gender Equality Club along with a Farming Club and a Business Club. The sort of issues they were highlighting were similar to those in Scotland. Kids don’t engage with education for various reasons and if those barriers can be removed, society benefits no-end. It was inspiring to see the extent to which the school in Rwanda does so much with so little available in the way of resources. The staff are so passionate about doing the absolute best they can for the kids, despite adversity. The fact that we have the same ethos at KHS is most likely the reason that we feel so much in common and are very much kindred spirits.
We meet back with the KHS students after our staff meeting and they’d had a lovely time playing “agati” and other games. I was particularly pleased to see that Hannah had befriended some teachers and was giving ukulele lessons in the staffroom! I really like it when students take initiative and just fire themselves into situations.
Lunch back at Good News was pumpkin soup. How am I going to deal with making my own food again?! 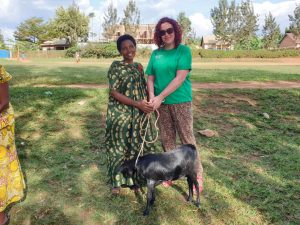 In the afternoon we visited a community on the eastern outskirts of Kigali. There were a number of widows, orphans and survivors of the genocide and our job (believe it or not) was to give them goats. This was the money that had been raised at KHS before we came to Rwanda combined with money from Gilliam’s fire walk. The culture is that adult goats can have baby goats to be distributed to other families so it is a very sustainable way to donate. 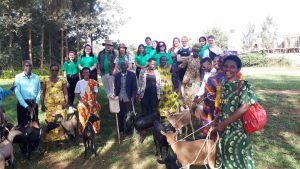 The goats can of course be used for meat or dairy. The community were very welcoming and after a prayer and he introductions we handed the goats over officially on behalf of KHS. Many of the goats were given names including “Geoff” (with a “G” of course), “Pie” and “René” (after the lovely duty manager of Good News). There were more songs outside and lots of thanks given. I felt we made a real difference to this community.  They were so lovely.
Dinner was kebabs.  I don’t think they were goat.