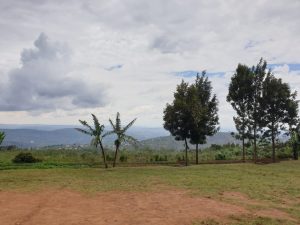 Last night after dinner (chicken, rice, tatties – much enjoyed) we shared our thoughts on the memorials we’d visited.  There were a variety of opinions around the table and it was agreed that they were very harrowing and the stories horrible.  It was commented though that it was less harrowing than the museum we’d visited previously as the people were more unknown and the stories less personal.  I also commented that because Suzie had described it all so well before we arrived that I was not shocked by anything as I already knew it would be there.  This gives me a little tip-off to myself in future in that it seems in order for me to get the most out of a potentially harrowing museum or tribute site, it’s good for me to research what I’m going to see before I see it.  This could explain why I had an odd reaction to the 9/11 museum in NYC.  I didn’t know how it was going to be laid out or how it would convey the story.  I will know for the future. 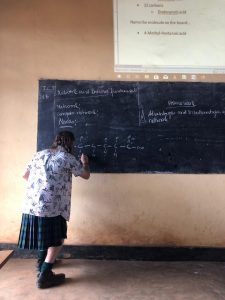 Suffice to say the thoughts and opinions shared were well-considered and genuine and an absolute consensus  was the disbelief as to what humans were and are capable of doing.  It was a wonderful discussion.

Breakfast was eggy bread and maple syrup before we headed back to our partner school at Bumbogo.  Today was the day that we were to join classes so I was paired with two science teachers, Moses and Grace.  They were leading a chemistry lesson on alcohols and carboxylic acids and after discussing the effect that alcohol has on the body, they asked me to teach about carboxylic acids.  This was a bit of a surprise but I rose to the challenge first talking about how ethanol is oxidised to ethanoic acid (and commenting on my hobby of wine-making) before looking at some examples of how carboxylic acids are named.  As it happens, this is one of my favourite areas to teach as I love exposing all the potential pitfalls such as chains bent around corners, counting from the wrong end of the molecule etc. etc.  I gave them some non-branched examples before we headed in to the world of branched carboxylic acids.  The students at Bumbogo are taught via English medium and picked up well on the lesson, despite not being used to my accent or teaching style. 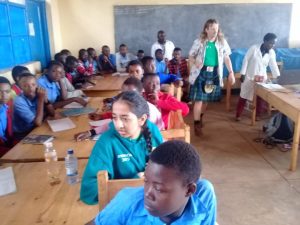 The lesson continued with a challenge to me – they had to draw a complex structure for a carboxylic acid and I had to name it.  This ended up with the Bumbogo teachers having to “Google” the prefixes for twenty (eicosan-) and thirty (triacont-).  It was a lot of fun going round and talking to the students and they picked up well on the “fun” aspect of the way I run my lessons.  They came up with good advice when asked “what advice would you give to a friend trying to name carboxylic acids?” so by that I reckon the lesson was well received.  Afterwards, they asked me to play so I played a few tunes on the fiddle.  I also had a go at the “Element Song” by Tom Lehrer.  I do this fairly regularly back home but I’m used to having a piano backing track (recorded by my late dear friend Alasdair Slessor) so here, without Alasdair’s help I made a bit of a dog’s breakfast of it.  I don’t think they minded though.

Some of the students sang and danced a welcome for us which I’m told also wished us peace – a lovely sentiment.  Hannah sang too and played her ukulele and they clearly loved that.  Before we departed we sang “500 Miles” and again, the repeated refrain was our friend in working the crowd. 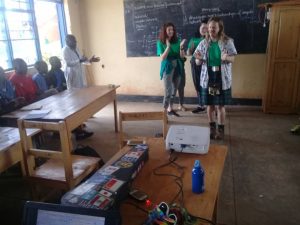 Back outside in the playground I noticed that we had quite an audience of the primary school students watching us and in particular, taking an interest in my fiddle.  I decided to take matters into my own hands and walked round the playground, in my kilt while playing the fiddle and chasing the students.  They loved it and Suzie commented that this incident is now up there with the most surreal things she has ever seen.  I had a wonderful time and it was so nice to be a teacher again.  Teaching is one of my central passions and without a classroom of folk and a topic to ruminate on, I’m a bit lost.

We had the afternoon just to chill back at the digs as a few people were suffering from travel tummy.