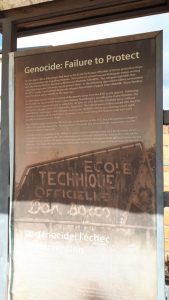 We got to relax for the morning until lunch which was at 1pm. It was soup today so I opted for two rolls with Nutella (must say this was much needed).

We then travelled to our second set of genocide memorials of this trip.

We met our guide and went into a massive room filled with the skills and clothes of the Tutsis that were killed during the genocide. It showed some of their belongings. They believed they could hid there for a while and wait for it to pass as they wouldn’t be killed in a religious place. They were wrong. 5,000 people died in this place, the holes from hand grenades were all still there. We then went in to a building showing all of the old school books, and then we went in to the kitchen where many people died this was then preserved so visitors could see where everything occurred. 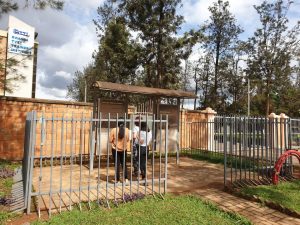 We then travelled to Nyamata. Firstly we entered a church. This was once again filled with many clothes, in this case many were babies or toddlers clothes, we say some belongings, such as watches and the identification cards. We went down to a room showing a closed coffin and skulls with some bones. You could make out the way they died from many of these. From the outside you could see all of the bullet holes in the roof and the places that the hand-grenades were thrown. Outside were many graves you could go down some stairs however I decided not to as my leg is still partly sore. 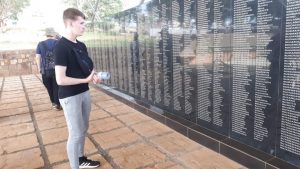 Overall I did not find that I was emotional at these memorials as much as I was at the very first one. I believe it is because in the first one there was the names, faces, favourite food etc. So this made you realise that it was a person. It can relate to you as it could feel like your cousin sibling auntie uncle. However in the two today it could be anyone which in one was it harder but you can’t feel a personal connection, as the clothes tell a story that something happened to the place. The faces tell a story of what happened to an actual person, that still had a whole life to live.