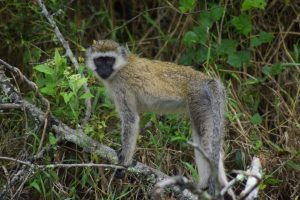 We had an early start this morning – on the bus at 6.00am with breakfast to be consumed while travelling. The reason: we were off on safari. Akagera National Park is on the East side of Rwanda on the border with Tanzania. We traveled for 3 h 18 mins on a mixture of tarmac and dirt track roads to arrive at the park at 9.18am. We visited the facilities and Ben was unimpressed with the privacy screen made out of sticks. There were so many gaps that it might have well have been not there! 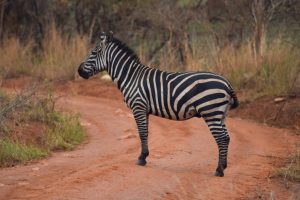 At the gate we met our guide, Justice who was absolutely charming. He talked us through the map of the park and explained that it has a natural border of a river in the East and a solar powers electric fence in the West. There are guard houses along the fence with 4 guards in each one. Every so often 2 guards swap with another two and inspect the fence for holes due to animals getting out of humans (poachers) trying to get in. Gavin bought a hat made of banana leaves in the gift shop and spent the rest of the trip looking very stylish. 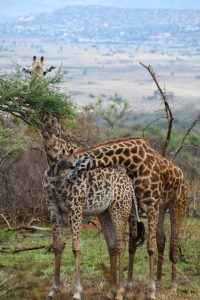 We set off through the park in the bus and very quickly spotted warthogs. The cry of “Pumba” went through the bus and I considered as to whether these ones were as flatulent as their fictional compadre. Some beautiful giraffes followed – nibbling away at the tops of the trees that their long necks allow them to reach. The zebras looked like they were from Mars and we learnt that each has a unique set of stripes – a “fingerprint” if you will.

We saw baboons grooming each other and some very cute baby baboons riding on the backs of their parents. While we were watching them I had to swat a tsetse fly that was buzzing round the bus. When I hit it blood came out and stained the back of the book I swatted it with – hence the name of this post! 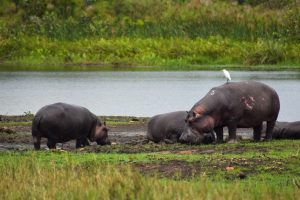 We had lunch next to some hippos who were sunbathing by a lake. Apparently they have quite sensitive skin and can sunburn easily so we offered up some Factor 50. Needless to say, Justus declined the offer on the hippo’s behalf. At one point a hippo started to come towards us so a concerned looking Justus instructed us to move. When a park ranger tells you to do something you’d be extremely foolish to do otherwise. 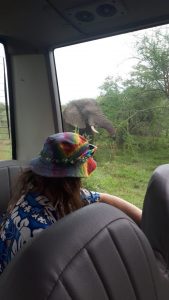 Justus was the world expert at spotting creatures in bushes and that was epitomised when he spotted….an elephant! It was quite far away and quite hidden but a side track took us to where it was. We spent a long time looking at it through the bushes before it took the decision to come right towards us. Folk on the bus were swearing blind that it was posing for us as we had such an incredible view. I did detect it had a cheeky smile so perhaps they were right. It was so beautiful and so graceful and quite the contrast to my previous elephant experience in Thailand where they were captive. Not one I would ever repeat – these animals deserve to be wild and should be left to be so.

Later on we saw a herd of wild buffalo and I was reminded of how I refer to you when you’re running through the house.

Eventually it came time to leave the park.  It had been a long and bumpy day but well worth it! We arrived back to beef, sweet tatties, rice and peas. Then we crashed out.