Last night we had an adventure.  This is my favourite kind of adventure in a foreign country – the grocery store.  We managed to buy some biscuits, ground nuts and various items of confectionary.  It was quite marked that the vast majority of goods were imported and some of them were quite expensive.  Cravings for sugar, chocolate and milk were satisfied and we ventured back to the digs and chatted at the sofa space. 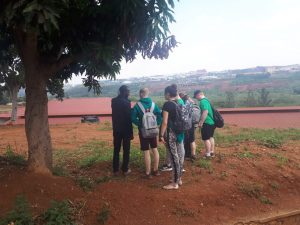 It was eggs for breakfast this morning and then we drove back to the church to where there is also a vocational training college.  We were greeted by Fred, the manager of the college who explained that the students were mostly ex-street kids and in particular, some of the young women had previously been sex workers.  Now they are training as hairdressers, welders, sewers, carpenters and masonry workers so they now have a strong chance of what we in Scotland call a “positive destination”.  It was fascinating to hear about the ethos of the education.  I mistakenly assumed that it would be very much an “old school” ethos with punishments, blame etc. but instead it is actually exactly the same as the ethos at KHS.  The line “what can we do to help you” is a common one and when folk are not attending, they examine the barriers to them doing so and try to remove them as best they can. 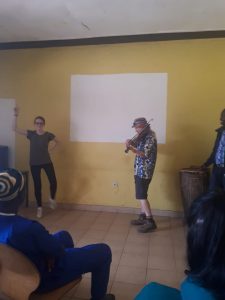 We met the students and after a few introductions we did some tribal dancing with lots of drumming and singing.  A number of us were pulled onto the dance floor so I made a suitable prat of myself throwing some shapes.  Afterwards it was our turn so I sang “The Jeely Piece Song”, Lauren danced (so wonderfully and so bravely again!) and then we all sang “500 Miles”.  The “da da dum” repeats went down a treat.  After thrashing us at volleyball (I was spectacularly dreadful but very much enjoyed the game), we served them lunch and took our leave.  It was great to see how people are making progress with people who have been in quite negative situations. 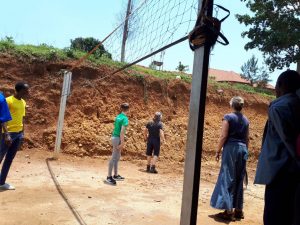 In the afternoon we met some women who have formed a craft cooperative.  They make various items of jewellery and clothing with the support of Comfort International and the are all widows or orphans of the genocide.  I was interested as to whether it had been common for women to work prior to the genocide and right enough, that had indeed not been the case.  The fact that so many men had been killed really forced these women into earning to support themselves and their families.  I also got the impression that the social side of the cooperative was equally important as the financial side as they all have similar stories and therefore gain the support and community of the friends and co-workers.

A number of us had bought material to be made into clothing, self included so I very much look forward to receiving my new shirts in a few days time.  The fact that they can make clothing in such a short time and at such a reasonable cost is really quite impressive. 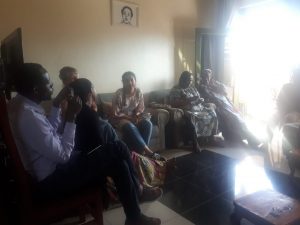 Before I leave you today, a word on physical contact in Rwanda.  I’m notorious for having a “do not touch” sign permanently around my next.  Here in Rwanda I’ve had to relax that a little as spontaneous hugs, hand holds and handshakes are pretty much the order of the day. Pushing ourselves out of our comfort zones is a major part of this trip so I’m glad to be making some headway there.  The people make it easier as they are so lovely and so genuine.

I’m looking forward to dinner and from where I’m typing on the balcony I can hear some lovely music that sounds like a choir rehearsing.