Our second day started off with us getting up around 7 for breakfast at 8, we were given eggy bread for breakfast which was very nice.

We left around 9 to get the bus for church, when we got there the pastor welcomed us but we couldn’t understand what he was saying. We listened to the pastor talking and found out he was talking about courage and doing what you love otherwise you will fail. We were then welcomed to the stage to introduce ourselves, we had to say our name, age and a fact about ourself. They seemed very happy to have guests as they also welcomed other guests to introduce themselves. We then were given a translator and listened to the pastor and the choir then sang some songs which were very enthusiastic and cheerful, everyone was very tired after the service as it was about 3 ish hours long. 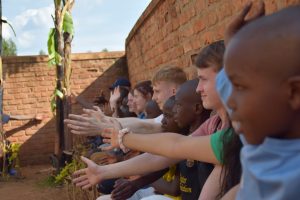 We then got back to the accomodation for lunch, soup and a sandwich which was very nice, we then had a short rest before leaving to get the bus to Gasanze kids project around 2. This is where kids who have been living on the streets or not had the best start in life were brought to, to try and give them a more positive start and keep them off the streets. They were all so welcoming and friendly, as soon as we got off the bus they hugged us all and took us to the house. We all introduced ourselves and because they were so welcoming I think that made it easier for those of us who are not as 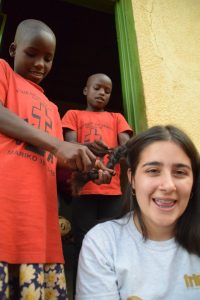 keen on speaking to large groups. We then split into groups one group went to the football pitch to teach the kids rugby and other sports, they all sounded as though they really enjoyed it. The other group stayed and learnt some dancing steps from me, this was quite difficult as they didn’t understand us so we had to just show them. The kids then all did drawing of things they enjoy, some put food, family or sports. This gave us the chance to get to know them, they were all pretty good with English but some of them didn’t know any so sign languge was often used. A few of them loved playing with hair which was very cute as its probably not the kind of hair they’re used to. A game of football was started and lots of kids joined in and that was very nice to see as they were all having fun. It was then time for us to leave and they gave such a nice goodbye, they hugged everyone and sang as we left, some of them followed us out and it was so sad leaving them. 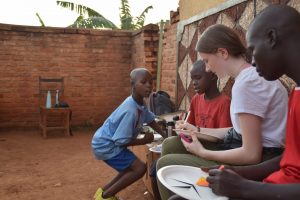 I think today has been very good as I’ve got know a bit more about the street kids, I think I gained confidence speaking to new people as they were so welcoming and open to new people and it put me out of my comfort zone. It’s really great to see children who have had such a negative start to their lives be so positive and friendly.