It’s a known fact that women are always lugging around heavy, awkward, inconvenient sacks to hold their things. It’s also a known fact that guys don’t tend to endure this torture. Why is this? It’s because the male of the species have pockets and girls…well they just don’t.

This dilemma started thousands of years ago. Yet, nothing has progressed or changed. Even with the voices of women throughout the centuries pleading for a small, simple solution to this impractical problem. A struggle that they face daily with the designs of female fashion. 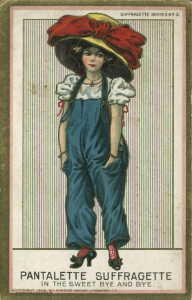 The change these women seek may seem mundane, but the sexist, political ideals behind the lack of pockets are not. Pockets are the prominent force in ‘the great clothing gender divide’ not the terrible trouser or the sinister suit as many suspect or believe to be in control of this issue.

The, somehow, world-renowned designer Christian Dior showed us just how big the gender divide is in clothing, when he said “men have pockets to keep things in, women for decoration”. This statement from him is sickening once you look at the idea behind it. It’s fuelling sexism. It’s suggesting that only one gender is capable of fulfilling the role of being functional while the other gender is cast to the side and labelled incompetent. It’s telling us men are hard working; women are not. This way of thinking that Dior is broadcasting is what is fermenting other mens beliefs. The belief that women are just for show, a trophy for them that they can flaunt around, with no repercussions. They’re not useful one man says after hearing what Dior says. Why should their clothing be? taunts another.

Maybe this rot that’s been infesting society for hundreds and thousands of years is why the suffragettes deliberately put pockets on their suits and on all their other items of clothing. Maybe it’s the reason why pockets have been key parts of attire for all women’s right activists and feminists alike. A subtle way to show that they’re not conforming to society’s rules or playing a part in its hidden propaganda.

Designers, and the fashion industry as a whole needs to stop ignoring what there putting females through by leaving pockets out of their designs. They need to realise that women want clothing that they can, at the very least, function in. They need to finally accept that women’s clothing needs pockets and that they as in industry need to make it happen. Pockets are key for all female activists. Pockets allow women independence. Pockets symbolise practicality. Pockets quite literally allow women to stop carrying extra baggage with them. That’s why we demand them, that’s why we need them.