The winners of the 2016 Central E-Safety competition for children & young people in Falkirk, Stirling and Clackmannan Council areas to Create a Game/App or an Animation/Video to help deliver a strong e-safety message and promote positive uses of digital technology have been selected by the judging panel.

Prizes and certificates have been presented to the winners as follows: 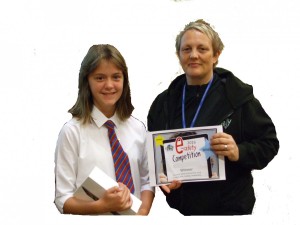 Winner in the age category 8-11 was Karys Findlay at Moray Primary School who was received a prize including an iPad mini, and chance to have lock-and-play gaming sessions. The school also received a year’s online subscription to BrainPop UK, BrainPop Jr and BrainPop ESL. The prize was presented by PC Fiona Murphy of the Central E-safety Partnership.

Joint Winners in the age category 12-15 were Cara Vickers and Jena Brown of Alloa Academy who each received a prize including an iPad mini and chance to have lock-and-play gaming sessions. The school also received a DVD recorder/Freeview player and a year’s online subscription to BrainPop UK including BrainPOP Español, BrainPOP France and BrainPOP ESL.

Pictured at the presentation of the prizes to winners Cara Vickers and Jena Brown were Headteacher of Alloa Academy Jackie Ebsworth, renowned tenor Martin Aelred and PC Andy Ward of the Central E-Safety Partnership.

This competition was to help celebrate great uses of the Internet and mobile technology, and promote tips for keeping safe online and in using mobile devices to help children and young people better understand about the positives of sharing online but also the dangers of inappropriate sharing, as well as how to avoid making hurtful comments online.

The Central E-safety Partnership is very grateful to the following for their support and in providing the prizes for this competition: