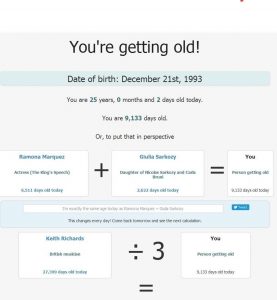 You’re getting old! This a an online tool where you enter a date, such as a birthdate, and the site presents a whole range of calculations related to that day by comparison to the current date and time.

As a bit of fun it has some entertainment value, but for a classroom it can also help introduce the concept of comparisons of time in history, or other curricular areas related to specific pieces of information (such as science when looking at heartbeats, breaths or moon orbits).

Another calculation included is in making a comparison to the length of time elapsed from the birthdate until today compared to something in history  from that same birthdate but going backwards in time by nearly as far back. Thus as an example for a child in a class whose birthdate might have been 29 January 2010, thus comparison calculation on that date in 2019 would be “When you were born was nearer to the 9/11 terror attacks than today.” This can highlight something that to people who have that earlier event in their own lifetime perhaps reflecting the passage of time between people of different ages and their perceptions of how long ago something happened.

There are links to social subjects when it comes to comparing, for the length of time which has elapsed since the birthdate selected, how far a single location on the planet has travelled as it rotates, the distance travelled as the Earth revolves around the Sun, and more.

Then the site picks out selected historical events from the birth year, from early childhood, later years as appropriate. And it notes the dates on which that child will reach certain milestones – in a classroom context when numbers start to get large when you can no longer actually picture them in your mind, this site can be used to get children to try to guess the number of days until certain landmark dates before revealing the site’s calculations.

For birthdates of adults (you can use those of celebrities known to pupils) there are additional comparison calculations (they won’t appear for children’s ages since it relies on information comparing the ages of two other well-known people) – such as taking an adult’s age and showing it as the sum of two younger people (so that could be an older named actor being the same age as two other named child-actors.

One last comparison displayed is a pie chart showing the number of people born on the same birthdate as that selected and highlighting the number who are still living. This, like many of the other calculations, can provide the starting point for discussions for social studies subjects.

Give it a go http://you.regettingold.com and please do share in the comments below how you’ve used this tool in the classroom,