Often, when pupils undertake a piece of writing, a teacher will provide feedback to the pupil. This can take the form of face to face feedback by way of a conversation between the teacher and pupil concerned. Or it can be written comments added to the piece of work by the teacher.

It may be that for some teachers in some situations a screen capture tool may provide additional benefits. Advantages of using screencast tools include the fact that the teacher can say so much more in a short space of time, compared to what they might write beside the text; the pupil hears the familiar voice of their teacher which (with the benefit of hearing the tone of voice) can also provide more meaning than the same comments simply written by the teacher and read by the pupil.

There are several free tools which can capture a video of what you see on screen where the tool can also capture the spoken comments of the teacher as they highlight the elements of the writing on which they wish to add comments.

Click here for an example screencast showing the use which may be made of a screencasting tool to provide audio and video feedback to a pupil about their written work. This uses screencast-o-matic to record the voice of the teacher highlighting and commenting on elements of a piece of writing produced by a pupil in Microsoft Word (though could be any tool on screen).

Screencast-o-matic (in common with several other similar screencasting tools) lets you highlight the area of the screen to show, press record, start speaking and move the mouse to highlight selected areas of the work on which comments are being made. Once the recording is completed, simply press stop. 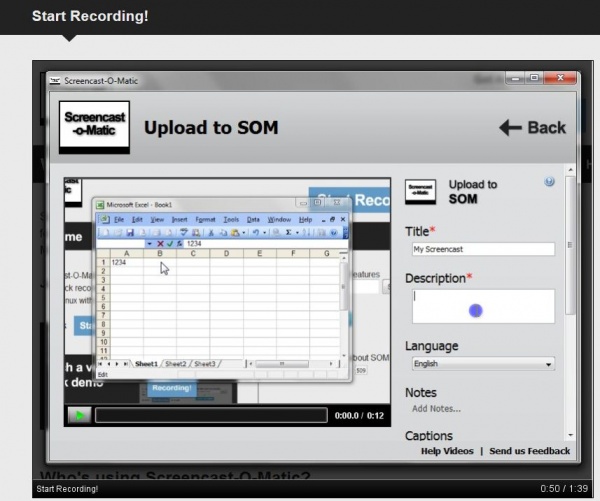 Then the video can be played back, downloaded as a video file (for storing offline, for sharing with only the pupil concerned, or to upload later in a network space or private online storage space) or shared via Youtube or just using Screencast-o-matic’s own storage (where the link could be shared only with an individual by email, or as a link on a website or blog if to be used for wider sharing). All for free and completed very quickly.

Click here for a video tutorial (with annotated written notes too) on how to create a screencast audio and video recording using screencast-o-matic.

Click on the video below to see how to create a video of a Powerpoint presentation with your voice using Screencast-o-matic:

Screenr is a free online screen recording tool – nothing to install – just press reord and go. Videos produced and hosted in your space on Screenr are playable on mobile devices (including iPhones).

Interactive whiteboards, such as the Smartboard, also provide a screen-capture tool for creating a video recording, with spoken audio, of movement of what is done on the screen.

If your school uses Smartboards then you will have Smart Recorder. The video below shows how to create a video using this tool, and provides examples of how this can be used in a classroom.

Screencasting tools can be used as described above for providing feedback to pupils (on any curricular area) and can be used for explaining how to do a variety of tasks to pupils, and others, where these tasks may be undertaken on screen – these videos can then be shared on class blogs or school websites if a wider audience is desired, or shared with an individual by email if that is what is the requirement.