Memes and animated gifs abound in social media. You don’t have to look too long online to see these appear, often being shared and shared by many people via their social media accounts, or prominent on webpages or blogposts to draw in the reader to find out more about a story or data.

Having learners create their own memes or animated gifs can support their learning across all areas of the curriculum. The process of demonstrating understanding of a concept involves learners in reflecting on their learning, often discussing with others to test the depth of that understanding, and then finding creative ways to present the information to others. Where learners are encouraged to make these animated gifs or memes to demonstrate their understanding of concepts they are reflecting on what the key points are, they are summarising, in effect creating a visual précis of information.

So what is an animated gif?

Animated gifs are short animations lasting just a few seconds, sometimes just a sequence of related images, sometimes a short looping segment or clip of a video, sometimes a stop-motion style of inanimate objects brought to life to convey a message. 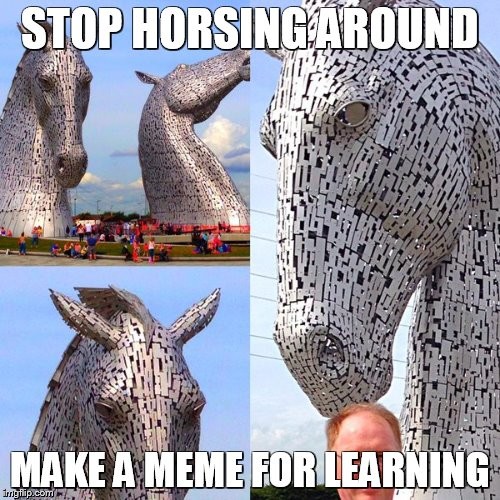 And what is an image meme?

Image Memes generally may consist of a single photograph with text along the top and foot of the image, sometimes black top and bottom borders where bold white text is superimposed. The text is often in capitalised Impact font.

Animated gifs and memes present messages in a visual, attention-grabbing way, to make those who view them stop and think. The most thought-provoking memes and animated gifs distil what can be a complex concept into the main idea which can be understood in just a few seconds.

A Mental Health and Wellbeing project, AyeMind, (which inspired this blogpost after a presentation by Dr Trevor Lakey, Health Improvement and Inequalities manager with NHSGGC) developed by the NHS Greater Glasgow and Clyde along with partner organisations, has a fantastic website to be a part of providing positive mental health support for children and young people.

How to create an animated gif

There are a number of free online tools which let users create an animated gif. When using in an educational setting it would be prudent to check for suitability of advertising or galleries of user-created content which is rarely moderated.

Ideally find a tool which just offers the tool for creation of the animated gif. Each tool which creates an animated gif may provide different options such as the limit on the number of images which can be uploaded, the option to control the speed or frame-rate of the animation, the size of the output animated gif image, and sometimes further options. Some simply provide the option for users to specify the location of an already uploaded video online, and the starting and finishing point for the clip animated gif to be created.

The Young Scot website AyeMind project page provides an excellent outline of an activity for involving children and young people in deciding on the message they wish to convey and then shows step-by-step how to use either an online tool or a mobile app to create an animated gif. There are also plenty of example of memes and animated gifs created by children and young people on the Young Scot website AyeMind project page and an outline guide providing the steps to running a session with children, young people or adults on coming up with the ideas and then moving to making the memes or animated gifs.

You can make a gif of your #PowerPoint presentation with a few simple clicks. Learn how: https://t.co/teRrIIVcEL

Online tools or mobile apps for creating an animated gif:

ABC.ya animator – aimed at being suitable for young children since it only permits drawn images or selection of pictures from an inbuilt galley of images.

GifMaker.me – animated gif creator with several options from which to choose in controlling how the animated gif will be presented, and provides the option to add music or even combine several animated gifs. As with any creation tool it provides the opportunity to explore sources of images and content found elsewhere, to use only where permission is granted and attribution given as required. http://gifcreator.me/ is the version of this gif creator which does not require Adobe Flash so works on most devices.

GifMaker.net – provides the facility to create an animated gif from uploaded images or from a section of a YouTube video (up to 15 seconds long, where you can select the start and end point within a YouTube video), adjust speed, duration, image order and start point. It also supports resizing all images to fir the size you require.

MakeAGif – provides the option to make a gif from an uploaded existing video or from an online source on YouTube, from which the specific segment can be selected. Be aware of the gallery of examples which would not all be appropriate for an educational setting.

EZGif – provides the option for animated gifs from multiple images (up to 400) or from video. There is advertising on the site but no gallery of user-created content.

Mobile device apps – many apps are available for smartphone or tablet to create animated gifs. Leslie Walker put together “Mobile GIF Guide: Make Animated GIFs on Your Phone” which lists several apps for mobile phones or tablet devices, along with descriptions of the features of each. Justin Pot gathered together “Making an animated gif is easier than you think with these  which lists online tools as well as mobile device apps, including descriptions and guidance as to how to make use of each. Elise Moreau collated a list of free animated gif creators for mobile devices at “9 Free GIF Maker Apps for iPhone and Android” describing each and providing helpful hints as to how each can be used.

Creating an animated gif from a part of a video on YouTube can be done in several ways. One of the easiest ways is to insert the letters gif immediately prior to the “youtube.com” portion of a weblink to the selected YouTube video. This will take you to an interface where you make selections based on the clip you wish to use. This link explains and illustrates this. http://www.shakeuplearning.com/blog/easily-turn-a-youtube-clip-into-an-animated-gif-image/

Any image-creation tool (or a presentation tool like PowerPoint) on computer, mobile or tablet device can usually be used for creating an image meme – wherever an image can be placed with the facility to overlay text either along the top and bottom of the image, or within a border of black along the top and bottom of the image for white text to be superimposed on these black panels. There are online tools but as with any free online tool a having unmoderated galleries of user-created content has to be a factor an educator looks at in assessing the suitability of a tool in an educational context, however the following may provide the teacher with ideas, guides as well as inspire an adaptation of an existing meme to suit the learning need. Meme creation online tools include imgFlip Meme generator, MemeMaker.Net, MemeGenerator.net, and ImageChef Meme Maker (be aware that all of these have galleries of user-generated content which would not generally be suitable in an educational context but selected memes may be shared by a teacher for showing examples).

Static images will upload to social media accounts and websites, and can be embedded in word-processed documents as for any image. However animated gifs will not work in every application. If sharing in PowerPoint they must be inserted as an image and will only display as an animation when in slideshow view. Different social media platforms like Twitter, Facebook and Instagram have their own requirements for sharing animated images – click on this link for advice on sharing on social media platforms. http://blogs.techsmith.com/tips-how-tos/how-to-post-animated-gifs-on-social-media/