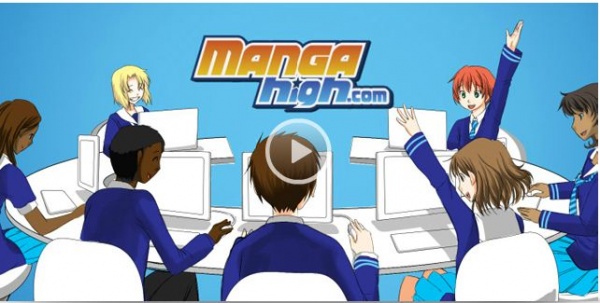 Mangahigh.com combines the development of maths skills with video game format games and social network models for entertainment and harness the power of social competition for building engagement.

So for the teacher there is a graded skills-based choice of activity to be selected for their pupils. For the pupil there is then a game, or series of games, which has been matched against the teacher-selected maths skill, selected for them, with the added motivational gaming devices embedded to make them want to compete against their own score to win badges, or to compete against others for score ranking.

Pupils who play video-games have been found to spend considerable time and effort to achieve the next level in a game – so Manga High games and rewards systems have been developed to capitalise on that enthusiasm and style of gaming, while at the same time building their maths skills as selected by their teacher. Pupils strive to gain badges, medals and score-ranking by playing games which develop their skills in maths.

For teachers who are not familar with playing video-games themselves they just need to know that the teacher chooses the maths skill being taught from a sequential skills-based list, and the Manga High games are automatically matched to that skill for the pupil. And for teachers they have access to the progress reports about their pupils, they set the next challenges based on the next aspect of maths being taught, and the appropriate level. In addition to the games themselves there are interactive learning pages which reinforce maths concepts prior to games being played so that pupils can learn a concept and try out answers to tasks without the gaming aspects, and then when ready they can pit their wits and knowledeg against the games! These interactive learning activities also adapt to the responses by the pupil to questions set so that they are able to learn at a pace appropriate to their knowledge and skill.

Watch the video below for an introduction to Manga High:

Manga High YouTube Channel provides a host of videos about Manga High, including introductory videos for different geographical areas, as well as tutorials for using various parts of Manga High, such as teacher setting of challenges for a class or individual pupils, or how to use Manga High Analytics to look at progress of individual pupils.

Note that MangaHigh has a free version and additional premium paid-for features if required.