So what is Virtual Reality or VR? 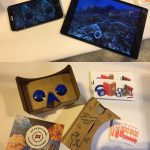 Virtual Reality, or VR, provides a means to have an experience of a location or object (whether real or imaginary) through a mobile device, often viewed through a headset, in such a way that when the viewer moves around they see the virtual view moving with them. So the images are usually 360 degree images and can be in 3D so that when viewed on a mobile device within a headset with twin lenses it appears to the viewer as being  as close to being there as possible. When you move forward, tilt your head, look up – it’s as if you are doing the same in the virtual reality experience.

Why use Virtual Reality in education

Realtime Virtuality – infographic about the timeline of virtual reality developments on the Essay Writing Service blog provides a visual representation of virtual reality within education, showing its place in the development of other digital technologies, along with statistics from surveys of use in education and helpful links to sources for each of the elements of the infographic so that anything shown in the poster image can have more information provided.

What are the options for the classroom?

The least expensive option for using Virtual Reality in a classroom would be Google Expeditions using Google Cardboard viewers (while they can be viewed without a twin-lens 3D viewer the viewer will lose the feeling of 3D) which are held by the hand up to the eyes. More expensive options are available with a variety of VR viewer headsets (such as Microsoft HoloLens, Gear VR or Oculus Rift headsets) and accompanying sensors (often handheld) so that the experience can involve touching or interacting with objects within a VR experience – as you approach or touch something in virtual reality it will react in a way as it in real life. 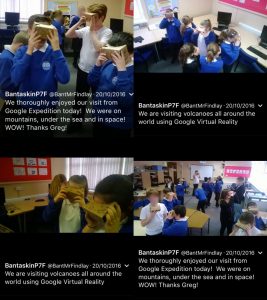 In Google Expeditions the teacher application provides suggestions for questions or directions to guide learners as they explore the virtual environment. The teacher can see on their mobile device app where the learners are exploring on their screens, and can make suggestions as the learners explore.

The video below is a promotional video for Google Expeditions in the classroom giving a brief overview of what it looks like in a classroom setting where a teacher with a tablet device guides pupils each holding a Google Cardboard headset viewer.

How do I get started using Google Expeditions?

The video below is a guided tutorial to using Google Expeditions

How do I use Google Expeditions with iPads or Android tablets?

The video below shows how Google Expeditions can be viewed on iPads rather than smartphones. Many school may already have iPads or Android tablets, and the Google Expeditions apps will work on these too. However the Google Cardboard viewer is designed with the size of a smartphone in mind. If you wish to use the app on an iPad or Android tablet then when running the setup at the point where you see the two images side by side there is a small icon at the top right which lets you change the twin view to single view. Having done that the view will no longer be 3D and will no longer be held up to the eyes of the viewer but simply handheld.

How do I use Google expeditions where using a managed device in a school wi-fi environment?

Here’s a solution which may work in schools where they have managed iPads and wi-fi:
1. You must use a non-school device as the teacher device (due to a restriction on managed devices) and connect that device to guest wi-fi in the school (don’t use your own 4G connection)
2. Download the Google Expeditions app on that personal device
3. The App will also be required on the pupil devices (so this would need to have been downloaded in line with the managed device procedures for your school or local authority)
4. Set up your personal device to enable the hotspot and create and add a password which you will be sharing. Then pupil devices will go into settings and wi-fi, pick that device (not the school wi-fi) and connect to this hotspot entering that password you created and shared.
5. Google Expeditions can now be led by your device – you click lead and the pupils click “follow” on their devices.

How can I use Google Expeditions without a VR Viewer?

You don’t need a VR viewer to take your class on an expedition –  Karly Moura has described at this link how a teacher can have a class experience Google Expeditions (or other Virtual Reality experiences) using existing classroom technology, whether class iPads or a single tablet.

Where can I find Virtual Reality Experiences for my classroom?

Google Expeditions provides a superb source of Virtual Reality experiences ready to be downloaded for use on devices in the classroom.

Discovery VR provides a wide range of downloadable virtual reality experiences in an educational context. Each is available for specific devices and come with notes for use by the educator with their class to guide their learners in the exploration of the experience.

10 Ideas to get started with Virtual Reality in the classroom – a blogpost by Jaime Donally listing and describing  sources of VR experiences for a classroom setting, including Nearpod, YouTube, AugThat, Google Spotlight Stories, Discovery VR, Google Street View, Roundme, Edorble and more. The post includes advice about each and how they might be used with learners.

25 resources for bringing AR and VR to the Classroom – a post by Jennifer Snelling on the ISTE site listing, and describing, a wide range of sources for VR experiences for use in the classroom which can be used on a range of devices.

Ideas for using Virtual Reality in the classroom

10 Simple Ways to Use Google Cardboard in the Classroom – a post by Neil Jarrett on the EdTech4 Beginners blog describing different ways in which the virtual reality app Google Cardboard can be used in the classroom.

What Virtual Reality experiences have you used with your class?