For many Scottish schools in January there is often an emphasis in the classroom on work on the life and literature of Scotland’s national bard, Robert Burns. The following resources provide ideas for how ICT tools can be used to provide different ways of helping to engage pupils with the study of the life and literature of Robert Burns or other Scottish literary figures. So whether it’s around the time of 25th January (the birthday of Robert Burns celebrated by Scots the world over), or notable dates in the Scottish calendar such as St Andrew’s Day (30th November) or Tartan Day in North America (6th April), the following resources may provide some ideas for using ICT tools to help provide alternative ways in engaging pupils in the sudy of Scottish literature.

For use with a Smartboard Interactive whiteboard click on this link for To a mouse – interactive poem writing Smart notebook resource with audio and interactive activities to help engage pupils with the poem “To a Mouse” by Robert Burns and then to create their own contemporary version “To a computer mouse.” If you find clicking on this link does not download the Smart Notebook file then try this: right-click on the link; then choose “Save target as” then at the end of the filename which appears add .notebook (that’s “dot” notebook); and change the filetype from zip to “all files” and finally save it to your computer. It should then open as normal.

The images below are of poems created after using the “To a Mouse” Smart Notebook resource above by pupils at Limekilns Primary School in Fife. Grateful thanks are accorded to the pupils, and their teacher Sharon Logie, for sharing these.

Today we broke down “To a Mouse” and explored the number of lines and syllables in each verse. We then created our own poem using Robert Burns’ Style. #BPSLiteracy @claganach pic.twitter.com/pBYDoqBRrm

The image below is from Falkirk Council’s Bo’ness Public School P6/7. Many thanks to them for sharing this example poem they created. 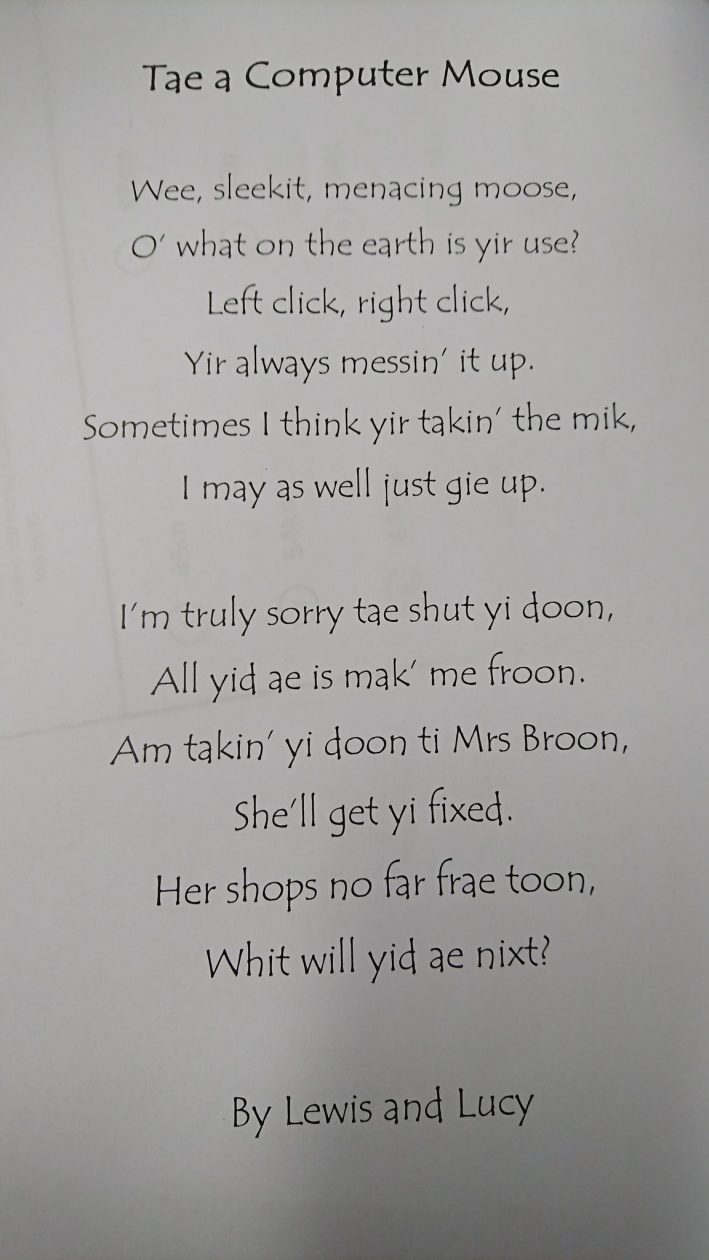 Animation based on a poem

A popular way to engage pupils with a piece of text is for them to create an animation based on a particular poem. Click here for information on some of the many tools which can be used by pupils to create animations, which could be based on the poems, tales or songs of Robert Burns. These animations can either be created using live video footage from a webcam, or still images, or drawn on screen, or using cartoon-style images.

Creating an audio recording of a poem or song

If you’d like to record the audio of pupils reciting or singing a poem, tale or song of Robert Burns a tool which can make this process really easy to record, edit out unwanted gaps or noises, and then create an mp3 file for sharing on a school or class website or blog is Audacity. This is a free audio editing tool. Click here for more information about Audacity for use in the classroom. Most smartphones/tablets/iPads have inbuilt facility (such as voice memo) to make audio recordings which can then be shared elsewhere.

A free online tool which is ideally suited to the needs of primary schools to provide a space and the tools for pupils to record their voices along with their own drawn images to accompany their voice is Little Bird Tales. This would be suitable for younger pupils to draw the sequence of events in their chosen poem, tale or song by Robert Burns and to then record their voice reading or reciting the poem, tale or poem of Robert Burns. Click here for more information about Little Bird Tales.

If pupils would like to create a video with music to accompany their chosen poem or tale of Robert Burns, but they perhaps don’t have access to video but do have still images, then they can still create a video using the free Photostory 3 software. This quickly produces a video where you simply upload your chosen still images, add narration (which could be pupils reading a poem by Robert Burns), and choose music style from the bank of provided music with Photostory 3 – you can slect from a range of styles, select instruments, speed, feeling and intensity. Photostory 3 software then quickly belds it all together into a video. Click here for more information about Photostory 3.

Recitation of poems or singing of the songs of Robert Burns is part of the tradition in many Scottish schools in in or around January. Making recordings of these performances by pupils can be done with Smartphone, tablet,/iPad or Flip video cameras, or similar, of pupils reciting poems, and then these videos uploaded to the class or school blog or website. More information about Flip cameras, or similar devices, can be found by clicking here.

There are several online music tools which pupils could use to create music to accompany songs of Robert Burns, or for creating a traditional Scottish mood music backing track for pupil-created video or perhaps a drama based on a tale by Robert Burns. Click here for tools which are music sequencers based on pupils dragging icons around the screent to choose instruments, musical phrases and sequence.  For more traditional standard music notation tools where pupils can choose instruments, click on the on-screen score and make their melody for a song, and add lyrics then click here.

For pupils who do not wish to speak the poem aloud, or who would like to use the automatically-generated voice from typed text they can do so using Wordtalk. Wordtalk is designed to work with Microsoft Word and can produce an mp3 file from text typed into Word. WordTalk also has produced Scottish voices (called Heather and Stuart for Scottish female and male voices). So to have Word “speak” the poems of Robert Burns with a Scottish voice aloud, and from which to create an mp3 audio file click here for more information about WordTalk.

There are online tools which can be used to map the life of of Robert Burns, or to plot his journey from one part of the country to another, or to show the sequence of events on a poem, tale or song of the bard. One such tool is Dipity – click here for more information about Dipity timeline tool.

Many teachers like to use comic-creation tools with pupils as they often find pupils engage for longer with texts when they are creating a visual work such as a comic strip combing images with the text. Click here for more information about several comic-creation tools which could be used by pupils to sequence a poem, tale or song of Robert Burns accompanied with images.

On online tool such as Blabberize lets pupils upload images of a character from a poem, tale or song or Robert Burns, add their voice and the tool automatically creates an animated image opening and closing its mouth as the pupil’s recorded voice speaks. Click here for more information about Blabberize. There are apps for smartphone/tablets/iPads which can achieve the same result such as ChatterPix which lets you upload an image, draw a line where you want the mouth to animate, and then simply record to create a quick animated character.

http://www.robertburns.org.uk/– a website full of resource collected by the world’s second oldest Burns Club.
http://www.burnsscotland.com/– this website holds a vast repository of resources related to the life, times and works of Robert Burns, including resources specific to each of the sites associated with the life of Robert Burns. There is also a host of resources aimed at schools for different age-groups.
http://www.burnsheritagepark.com/– this is the National Trust for Scotland’s site specific to the birthplace sites of Robert Burns. This includes the famous Burns Cottage where the poet was born, the historic landmarks where he set his greatest work, the elegant monument and gardens created in his honour and a modern museum housing the world’s most important collection of his life and works.

http://www.worldburnsclub.com/ norw http://www.rbwf.org.uk/ is the Robert Burns Wold Federation site. This includes a section devoted to learning resources for schools.

Education Scotland has a wealth of online resources specifically for schools about the songs, poems and life of Robert Burns.

Scran is an online database which includes resources ralting to the life and works of Robert Burns, as well as all of the locations where he lived or visited. Click here for more information about Scran.

http://www.bbc.co.uk/arts/robertburns/ The BBC website about Robert Burns combines information about the bard and his works, as well as many audio recordings. 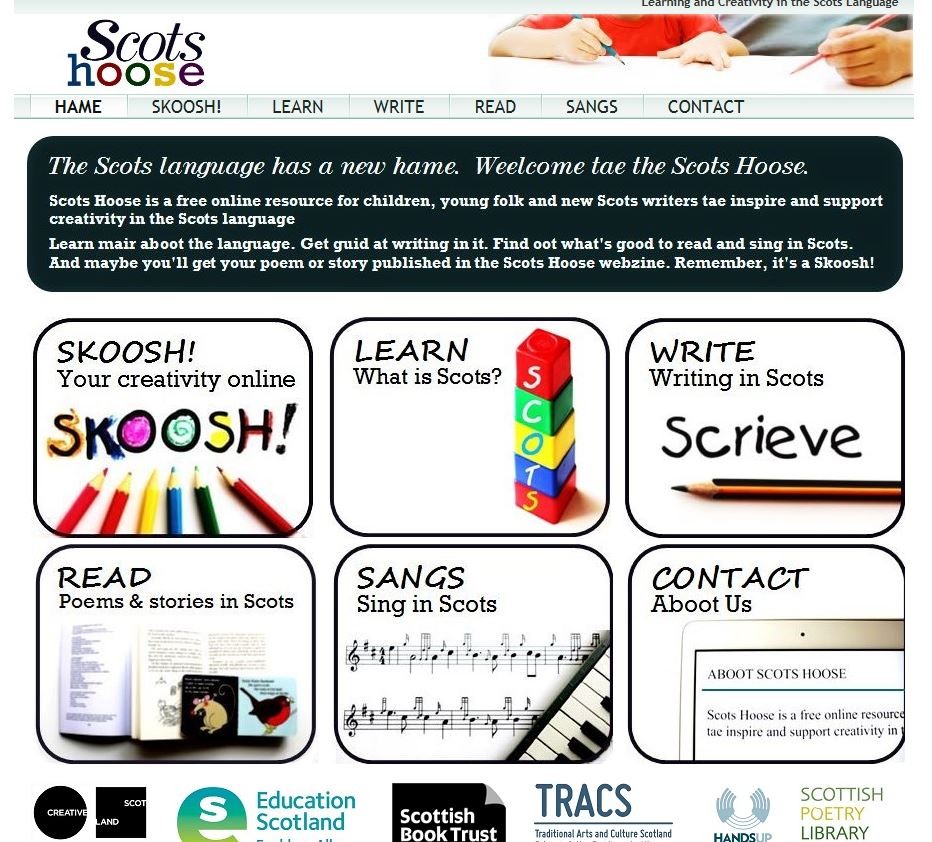 The above resources may provide some ideas for using ICT tools to help provide alternative ways in engaging pupils in the study of Scottish literature, and of course may also be adapted to the study of any literature.

Thanks are accorded to Stuart Lennie for the inspiration for the title of this blog post.