In P6a we have been busy we have been doing some experiments! The coke and mentos eruption, browning apples and  also…dancing raisins.

Each time we did the coke experiments we changed our variable.  It was very intriguing. After we had done the experiments we all went into groups. One was looking at different types of cokes, another one was the different types of mentos, there were two more  groups. In our groups we made bar charts and information boxes telling the person who was reading our poster about what we were doing.  We drew the graphs but also made them on computers using excel. This was very confusing because we have had to learn something new but it was great fun! We also wrote a report about it in our writing jotters and stuck in some charts in the results section.

The dancing raisins were hilarious because they just kept jumping up because when Alka Seltzer was added to water it produced gas which attached to the raisins and made them go up and down. We wrote a report in our writing jotters, but with less help this time. It was very enjoyable! 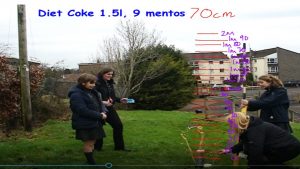