This week the teams took part in a sales task. They were all given the same sweets to sale and had to come up with their own branding and advertising and had to use their selling techniques to attract customers. They worked in their teams with new project managers and had to set up a sweetie stall. Each team was given 9 tokens to spend. This task was carried out excellently with each team having their own unique selling point.

Team Titanium had a hidden golden gummy bear in one of their sweetie cups, with the person who bought it getting an extra free.

Silver Arrows had free slime with each sweetie box.

Goldrn Galaxy had a pick and mix with free samples.

It was very close in the end, but the winning team was team Evolve. Their project manager Pearl did an excellent job and made her team very proud. She recieved postive feedback in the board room. Well done to all the teams! 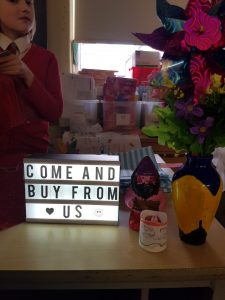 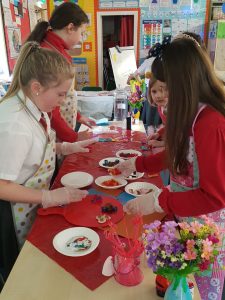 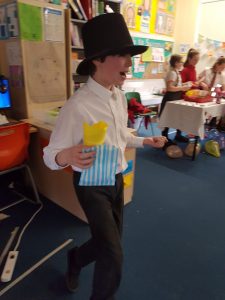 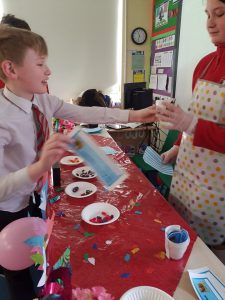 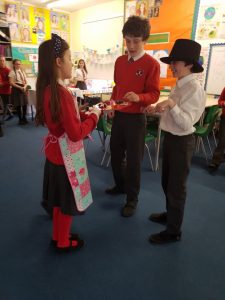 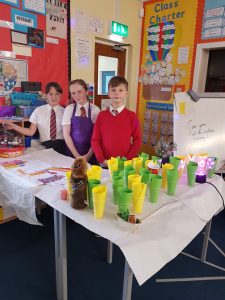 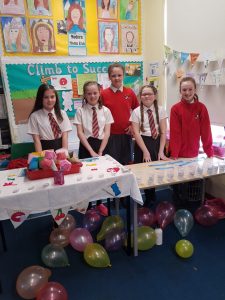 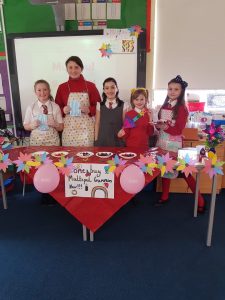 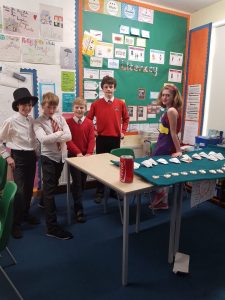 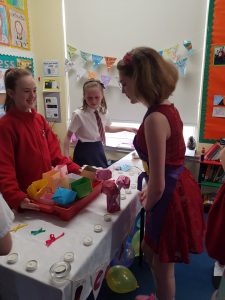 P6/7 discussed what they wanted to do for their next topic. It had to be related to Enterprise. After some discussion Gabriel had a fabulous idea of using the television programme ‘The Apprentice’ as a theme for their topic.

The class selected their own groups of 5. And picked a team name. We have 4 teams competing:

Each week they will be given a task, and have to select a project manager. We will update the progress of each task through our class blog.

Their first task was a branding challenge. They had to take the role of a designing company and come up with packaging for a chocolate brand called ‘Blazin Raisins’. To help select the best design we sent the final designs to the other classes to vote. The team that got the most votes were Team Titanium! The feedback in the boardroom included: people liked the colours and slogan.

They selected different project managers. It was great to see them selecting people who they felt would best be suited for this particular task. They had to create a 30 second TV advert and a Billboard.

Once the teams had completed their adverts and billboards, we sat in the ‘BoardRoom’ and watched them. The class then had to vote for the one that met the criteria and they thought was effective in grabbing attention. The group with the winning Billboard was the Silver Arrows, and the team with the winning advert was team Evolve. When counting the total votes with both advert campaigns combined, the group that came out top were Team Titanium! Have a look at the billboards and the adverts.

As part of their maths challenge this week, the Pentagons had to make a class pie chart to display information on class birthdays. They worked in pairs. It was challenging to make sure all the sections were equal, however, they did a great job and used their creative minds to help them. 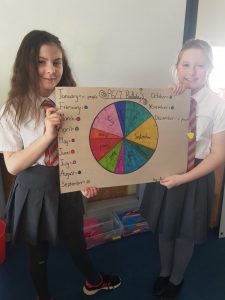 Primary 5 and 6 worked together in the classroom heats for the cluster k’nex challenge. They had 3 separate challenges. Including:

The finalists going through to the cluster heats are: 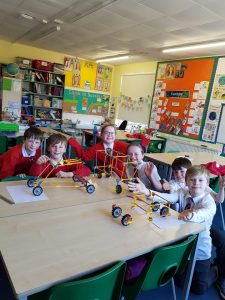 The triangles have been learning about compass points and bearings. As part of a challenge, they worked together to create a large class compass on the carpet. They were given the resources and had to work together, using their problem solving skills. They used real compasses to find the direction of North, and then a protracter to identify the other points. The end result was superb! 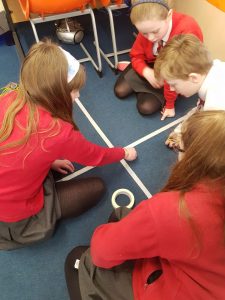 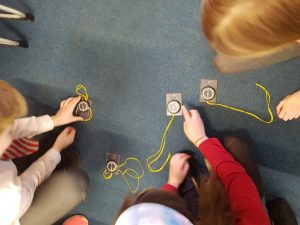 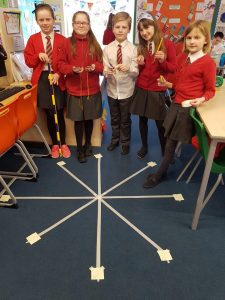 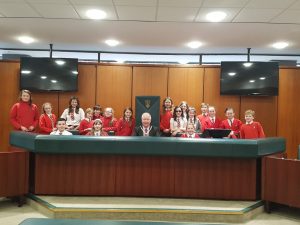 Primary 6/7 took part in the Lord Provost Debate this year. Their motion was:

“Social media is bad for you”

After some good points of discussion the council supporting the motion won with 1 extra vote. It was a close one! Well done to everyone.

For their science topic, primary 6/7 have been learning about chemical reactions. They carried out different experiments and recorded their results in a science experiment write up. Some of the experiments included:

It has been great fun! 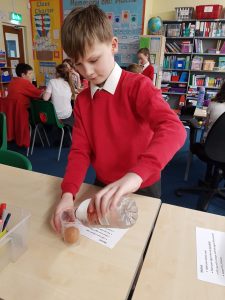 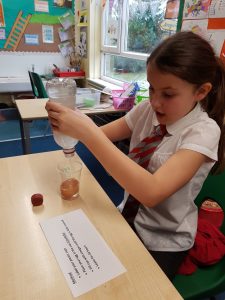 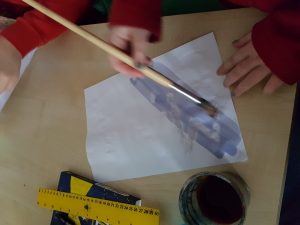 During Book Week Scotland, pupils had their first opportunity to create stop motion movies. They had fun planning and making these. Have a look at some of them.

The pupil council and the Rights Respecting Committee came together to organise World Children’s Day activities. Of which included wearing our pyjamas to school! We were all very cosy. The pupils raised £118 altogether of which £55 was donated to UNICEF. This was a lovely way to finish our OUTRIGHT campaign. Here are some snaps from that day. 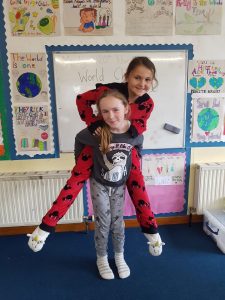 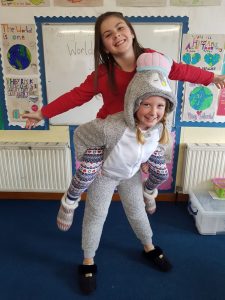 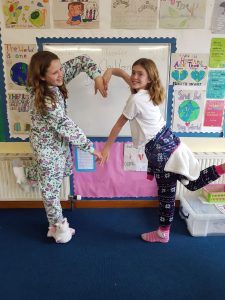 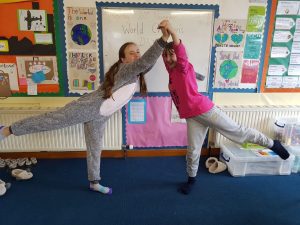 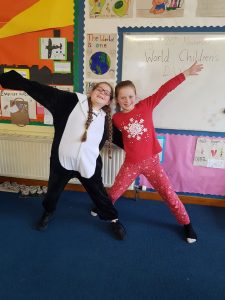 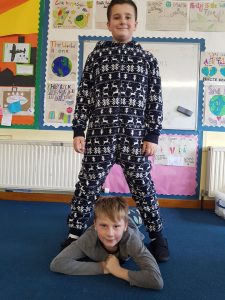 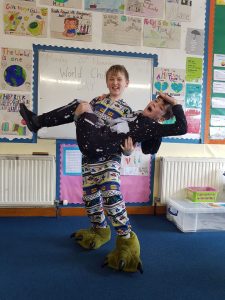 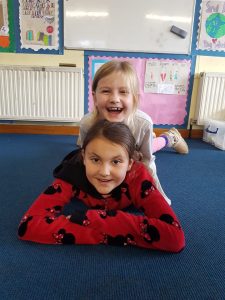 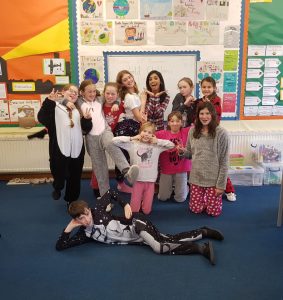 As part of our Health and Well being topic this term P6/7 have taken part in UNICEF’s Outright campaign to speak up for the rights of refugees. World Children’s day gives children the opportunity to speak up and have a voice and this year we want to help change the family reunion law. As it stands currently the UK Government doesn’t recognise a brother, aunt, uncle or a grandparent as family – at least not if you are a refugee. Under the current laws, children must reach Europe to be able to reunite with older siblings, aunts and uncles, and grandparents waiting for them in the UK. Children fleeing war and persecution shouldn’t have to make these needless, dangerous journeys across land and sea to be with their family in the UK. We are calling on the Home Secretary to fix the family reunion laws and help reunite refugee children with their family in the UK where they belong, based on their right.