This week in our PE lessons we have carried on with our gymnastics and have been practicing some of our balances. With the help of some excellent demonstrations from some superb gymnasts in our class we managed to do some bridge balances using 2, 3 and 4 points of contact; the frog pose and even some head stands by the end of the lesson. I was very impressed by how well everyone worked in their groups to support and look after their classmates to keep everyone safe while they were balancing.

Molly also says that she really enjoyed our warm up game for PE this week; gymnastics tag. During this game, if you get tagged you have to make one of the poses that we have been learning until someone copies your pose to set you free.

Continuing with our writing this week, we have been practicing with our onomatopoeia and alliteration in a piece of writing about a giant who has been asleep for a thousand years. I was very impressed with everyone’s work and loved reading all the descriptions of the giants!

P4b’s photos of their shoebox dioramas have been added.  Scroll down to have a look!

After a lot of working out and also creating WANTED posters, the 2 suspects who actually did it were revealed…it was…Hansel and Gretel.  The evidence from the text was that Hansel and Gretel were angry with Humpty at the start of the story and there was a sweetie wrapper at the scene.  The story also revealed that 4 footprints were seen in the egg yolk.  We were very surprised that they were our criminals. 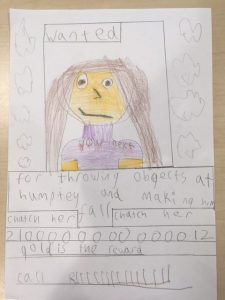 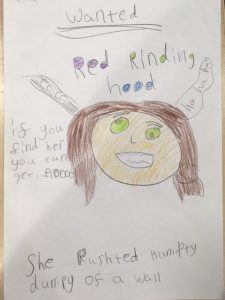 Lots more examples of our work will be making its way to our corridor wall display very soon.  Keep an eye out!