In French we were playing a yes or no game to learn about French numbers up to 100.  We then did a worksheet where we had to work out calculations in French and colour match the answer to one of the number answers in French. We had to think about it for a while because sometimes we would forget what each number was in French.

In literacy we were creating a summary in our jotters about the books we were reading at home or a text in class.  A summary is when you get the main idea out of a story or a text.  The Editors and Publishers created a ‘Summary Slider’ which is a burger shape with the text summary in it.  We also included evidence from the text and detail to support the main idea.

Even though it was only a four day week, it’s been a full one and we’ve managed to keep ourselves busy!

We met our new PE specialist on Thursday, whose name is Mr Aubrey. This week he was teaching us about rugby and our passing skills. Dylan says “We have to pass the ball from your waist and you have to catch it by making a W shape with both of your hands.” We also really enjoyed our warm up game, which was called Infection.

In our other PE lessons, we started a new block of lessons; gymnastics. We were learning about different poses that we used in the games during the lesson, like the straight pose, bridge, straddle, pike, star and tuck.

In maths, the Rectangles have started a new topic on area. This week we have been estimating and counting the number of squares that different objects cover to work out their area.

The Triangles also started a new topic and have been using the balance scales to compare the weight of different things in the classroom.

Our dioramas are now almost finished. Look below for all the pictures of our work so far! I think they’re looking really great!

First, our two Arctic climate zones, with some great animals in both. Some fantastic whales and fish by Jessica, Eleanor, Bella and Cara and some penguins jumping from the cliff into the sea by Luca Fillipini, Harry, Nathan and Bruce. 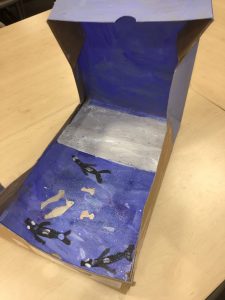 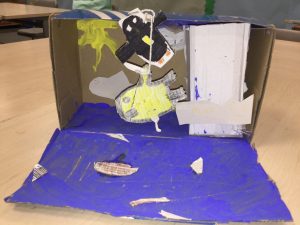 Here are our two deserts. Heather, Molly and Lauren challenged themselves to find a way to show a sandstorm in their dioramas and I think the way that they have used the tissue paper is great! 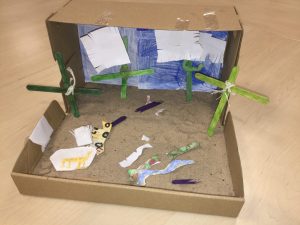 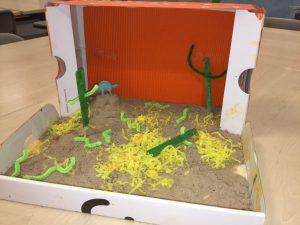 Next, we have our two temperate zones. This was a tricky one because we had to try to show that temperate zones had lots of different weather and I think that both groups here have done a great job. 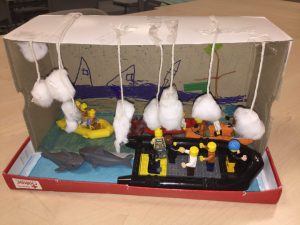 And finally, our tropical zones. I particularly like the idea that Hamiz, Euan and Ben had to use lollypop sticks to show just how many trees have been cut down in the rainforest! 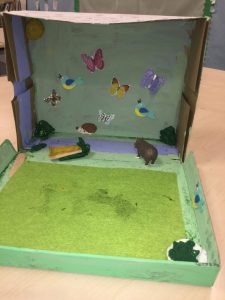 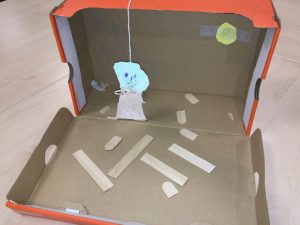 Today we also had our first skills academy session, which you may remember from the end of last term. The class was split into four different groups to join with other classes across P4 and P5 to work on some really cool stuff!

The first group, Design and Manufacture, had a design challenge this week were they had to design and build a table out of cardboard that would be strong enough to hold a book.

The group working on Digital Technologies were learning about coding and will be going on to code something called a Sphero, which is a ball that they can make move around in different directions using an app.

The last group, Learning for Sustainability, carried out a survey across the school to see what things we do in the school that are environmentally friendly, and if there is anything that we could possibly do better. Over the next few weeks, we will be reusing plastic bottles to make different things that can be used at home and in school!

On Thursday we were making decorations which were paper lanterns for Diwali.  Diwali is the festival of light and Sikhs, Hindus and Jains celebrate it.  There are lots of fireworks during Diwali.  It is mainly celebrated in India but can also be celebrated in other countries around the world.  During Diwali they eat yummy food and it’s on the 27th October this year.  It is normally celebrated around October/ November and the date depends on the position of the moon.  Pictures of flowers are also made out of sand.  People wear fancy clothing with patterns and colourful scarves.  We watched a story about Diwali in assembly and the main idea was that it is about good and evil and good always wins and light wins over dark.  We learned that lights are significant in order to guide people home.

In the pictures below you can some of P4b telling the school about Diwali and showing them the paper lanterns that we made.

P4b would like to wish you all a Happy Diwali! 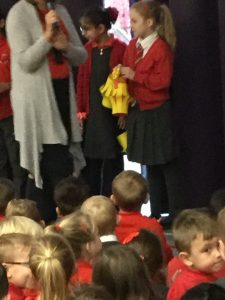 Thank you for your hard work, Primary 4 and thank you to all who provided us with a range of materials to create recent artwork in class.  They are looking FAB! Photos to follow very soon! 🙂

Have a great holiday!

On Thursday, we were learning about inheritance in science.  Inheritance is what characteristics are passed on from your parents and grandparents and previous generations. We did a task on a worksheet where there was a picture of a mum and dad  and they had 3 kids and you had to draw each child in a box.  We looked at the mum and dad closely and used some of their characteristics to draw the children.  Characteristics that we focused on were hair colour, eye colour, skin colour, dimples, mouth shape, nose shape, chin and head shape, ear size and shape and eyebrow shape. We have also made a front cover page in our jotters for our new topic.

Today we started making notes or a poster about our climate zone shoe box diorama to present in front of the class after the October Week holiday. We will be assessed on how clearly we can speak, the pace we are talking (not too slow or too fast), a medium volume, the information we are sharing with the class and the expression in our voice.  We also need to remember to hold our notes in front of our chest or below because the audience will need to be able to see our face and hear us.

We have finished our wonderful shoe box dioramas…

Can you guess which climate zones each of them are representing? Is it before or during climate change? 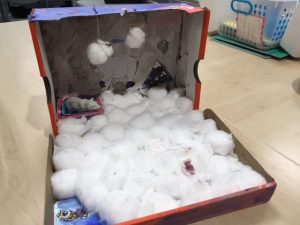 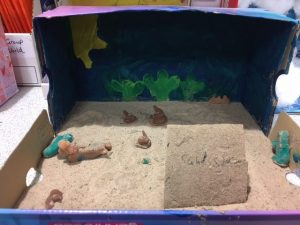 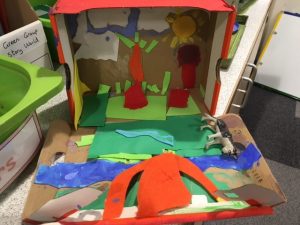 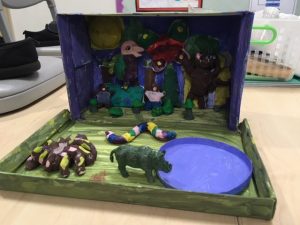 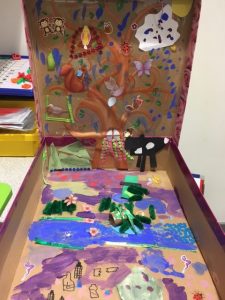 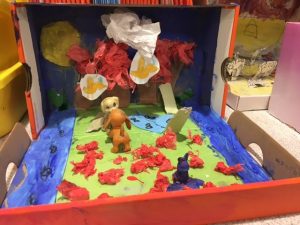 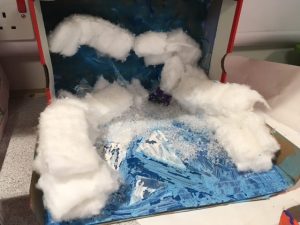 Last week was Maths Week Scotland and we were lucky enough to get a brand new trolley of maths equipment to help us in our learning! We’ve had some time to explore what’s in it and it’s been a great resource so far!

The Rectangles have been using the Numicon in our short division practice, which is also called the Bus Stop method. Here is a picture of Molly showing us how it’s done! 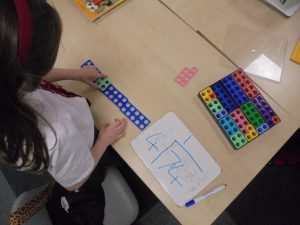 The Triangles have also been using some of the new materials when they have been learning about fractions. Here is a picture of Nathan showing us the difference between a half and a quarter this week. 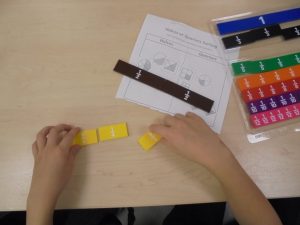 Over the last few weeks in our writing lessons, we have been writing settings for a scene, using our five senses to help us build a picture, as well as some great adjectives, connectives and even some similes to help us up-level our writing. Check out these great examples from Emilia and Ayyan! 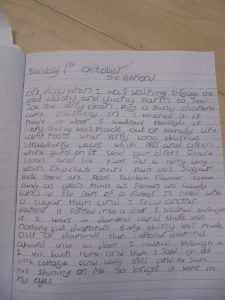 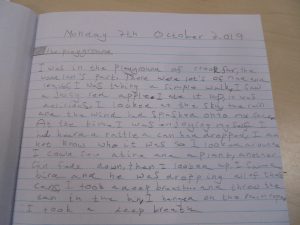 In Science we have been investigating the best conditions that plants grow in across the world, by planting some beans in soil and sand and by keeping some in the light and others in the dark. Here is a picture of one of the plants just starting to grow. 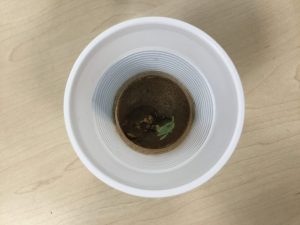 And some more once they have had some time to take root! 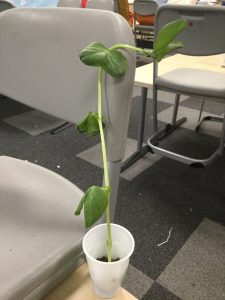 For some of our other science work, we have been looking at different climate zones across the world and have begun some work on some shoebox dioramas to show the differences in these zones and the changes we might expect due to climate change. I’m looking forward to sharing some photos of these with you when they are all finished as they are looking great already!

In French, we have been learning about the days of the week and months of the year; we played a matching game to link the English words with the French. Here are some photos of Molly, Luca Franchi, Nathan and Beth showing us how it’s done! 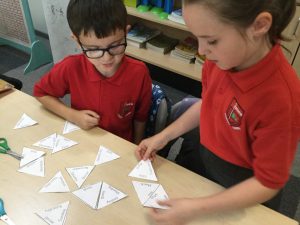 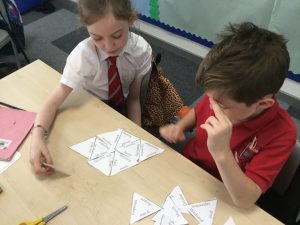 The Estimators group have been using Numicons for division. We used the Numicons to split them up into equal parts.

The Multipliers have been learning to multiply 2 digit numbers.  We have been counting on a number line partitioning the numbers into groups to show repeated addition.  We used the Numicons to multiply numbers by laying them out in groups. We also tried a different strategy which was like a chimney sum but with times tables by multiplying the units first and then the tens.

The Timers have been using Geoboards to make symmetrical patterns with elastic bands and checked them with a mirror.

Shoebox Diorama update: We have started to paint our climate zone dioromas and we started making the different objects and sticking them down like cotton wool for the snow and broken plastic for ice. We have really enjoyed making them but still have a little more to do to finish them and there will be some pictures of our dioramas coming very soon…