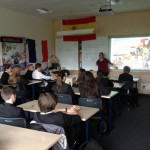 On Tuesday 16 December, the Modern Languages department hosted a series of master classes for S3 pupils. Pupils selected which language they wanted to experience. Pupils could learn German with Frau Hutcheson, Spanish with Bea and Señor Kearney, Portuguese with Senhora Reid, Dutch with Océane, Italian with Mrs Kasci, Mandarin with Mrs Qin or Gaelic with Mrs Adams. The sessions were a great success and pupils thoroughly enjoyed themselves. Photos of the sessions can be viewed here. 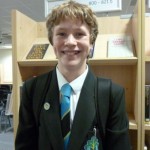 To celebrate Book Week Scotland, S1 and S2 pupils at were invited to take part in a quiz which would test their knowledge of Scottish books, from The Gruffalo to Treasure Island, from Katie Morag to Buddha Da. They were also asked to suggest where they would set a Scottish story, what it would be about and what would make it uniquely Scottish. The winning entry was from Sam in S1. Sam would set his story in Glasgow, it would be about Scottish creatures living in the sewers and each creature would be from a Scottish myth. Well done Sam!

Congratulations to all pupils who competed at the Renfrewshire Swimming Championships on Saturday 25 October. The Williamwood team were very successful, winning twelve medals in total, including six gold. A full list of medal winners is available here.

The PTA is holding a fundraising ladies’ pamper/shopping evening on Friday 7 Nov (7-10pm).

On Thursday 30 October, Williamwood hosted its annual Hallowe’en Disco for S5 and S6 pupils. All pupils wore impressive costumes, however, the award for the best costume of the night went to Luisa (S5) who dressed as ‘Darla’ from Finding Nemo and our Head Boy, Andrew (S6), who was dressed as ‘Daphne’ from Scooby Doo! More photos can be viewed here.

On Tuesday 28 October, the S1/S2 Drama Club performed improvised dramas based on Halloween. Over 50 pupils from S1 and S2 dressed in their spookiest costumes and performed to each other. A big thank you to the S6 pupils and Mrs Drewett for making this the largest and scariest Halloween performance to date. Happy Halloween! More photos can be viewed here.

Tuesday 26 August 2014 was the launch of the Flying Start Initiative at Williamwood.  The evening was a great success and a newsletter keeping you up to date with the latest news and developments can be found here.  There will also be a Flying Start stand at the careers fair on Tuesday 28 October where pupils and parents/carers can obtain additional information.

On Thursday 2 October, parents/carers were invited to attend an information evening on study skills. The evening provided parents/carers with an understanding of the variety of study techniques and strategies utilised by pupils in Williamwood. As well as study cards and mind maps, the sessions also highlighted a range of online resources which are available to pupils. A copy of the hand-out for this evening can be found here as well as in the ‘Parents’ section on the school website.

Roxie Rocks Williamwood! The performing arts department are delighted to present a short trailer of our pupils getting prepared for the first performance of this year’s school show CHICAGO. Pupils from S1 to S6 were involved in every aspect of putting this musical together; actors, musicians, dancers and a production team. The performances were a huge success!  Trailer can be viewed here

Any pupils who have been awarded with a sports tie (full or half colours) and who have not yet had an official photograph taken must see Miss Heslop in the PE department at 10.25am on Monday 20 October. We have arranged for professional photographs to be taken at 12.50pm on Tuesday 21 October.