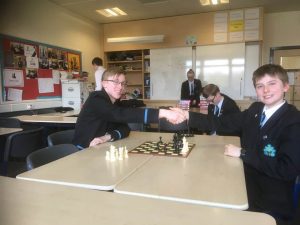 Amazing final game in the chess tournament on Wednesday 25 April after school,  as Matthew(S1) took on Cameron(S5) again.  Both boys were more laid back and relaxed at the beginning of the game this time but within minutes the atmosphere was tense and exciting as the game kicked off. Queens were lost quickly and the concentration never broke throughout the 90minute game. Well done to both boys for a fantastic match and congratulations to our 2018 winner – Cameron.  The prize winners will receive various awards during a chess club night in May – date to be announced soon.