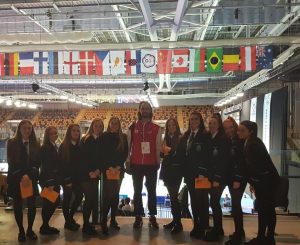 Pupil studying Higher Physical Education attended the Scottish Open Grand Prix on Thursday 23 November.  They were able to watch some of the world’s top players competing against one another in both singles and doubles matches.  Williamwood pupils were also given special permission to interview several players, asking them a series of questions which relate to the Higher course, specifically concerning how the players cope emotionally with the demands of performance.  Some of the players our pupils met and interviewed include Nathan Robertson (former World Champion and Olympic Silver Medalist), Adam Hall, Eleanor O’Donnell and Julie MacPherson (Scottish National Champions), plus Ciar and Ciatlin Pringle (former pupil).  The experience will enhance pupils’ understanding of key course concepts and also the quality of their written answers, in preparation for their prelim and exam paper. Pictures here.

Click here to watch a video clip of Ciar and Caitlin specifically mentioning the support of their former school at the event, with Williamwood pupils in the background of various shots watching their doubles match very attentively.