Well done to all S4 pupils who recently competed in the UK Mathematics Trust Intermediate Challenge.  Overall, Williamwood pupils achieved 2 gold, 1 silver and 11 bronze awards.  Additionally, our two gold award winners, Martin Alpine and Cameron Griffiths, qualified to sit an extended challenge (Pink Kangaroo).  Many congratulations to both and also to Martin who received a Merit award for his performance in the competition which places him in the top 25% of UK pupils who entered the Pink Kangaroo.  Well done!

Theo (S4) received an Ambassador Award for his passionate commitment to advancing equality in the school community with regards LGBT+.

Kyle (S2) received the Community Services Award for raising £2000 for the Maggie’s Centre by dying his hair bright blue as well as his commitment to fundraising.

The S5 T in the Street group received the Community Services Award.  Along with The Richmond Fellowship Scotland Dementia Services, the pupils were involved in supporting older people within the community with individual personal projects.

Christopher (S5) received the Creativity Award for his success as a talented oboist and percussionist.  Christopher also won the Eastwood Rotary Young Musician competition and was second in the Gilbert Innes Woodwind competition.

Rumaisa (S6) was awarded the Advocacy Award for her outstanding contribution to the school.  Rumaisa has achieved academic success, lead a team to success in a national Scottish Power competition as well as being accepted on to the Scottish Space School and being an S6 Science Depute.  She has also been selected for the New York Institute of Science programme.

Logan (S4) received her award after being named ‘Female Driver of the Year’ as well as finishing in third place in the Senior Rotax Max at the WSKC first round as the youngest competitor on the grid as well as progressing to the senior category.

David, Morgan, Danielle, Oliver, Andrew, Alanna, Sam, Hannah, Rebecca, Kirsty, Kyle and Alisa (S6) are the Full Colours Sports Group who received the Sports Award to recognise their outstanding achievement in their chosen field, whether athletics, figure skating, football, netball, rowing, skiing or table tennis.  These pupils are either national champions or they have represented their country.

Photographs of the event can be viewed here. 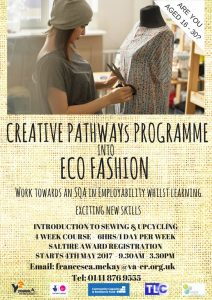 The  4  week course, which starts on May 4 involves learning basic sewing/dressmaking skills and then developing these skills  to upcycle unwanted items into fashion pieces and accessories.  It is free to anyone aged 16 – 30 and participants will also receive an SQA in employability.  If you are interested, please see Miss Smith in Pupil Support. 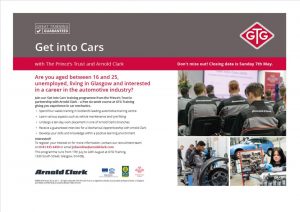 Congratulations to Georgia (S4) who competed in the Scottish Cycling Youth Tour of Scotland 2017.  This is a prestigious cycling event which attracted regional teams from all over the country including British and European champions.  Georgia was a part of the Scottish Cycling West A Girls team.  As a team member, Georgia, who is current Scottish Time Trial champion, helped the team to finish in excellent places on the overall results.  Georgia is in her last year as a youth rider and has been a great ambassador for the sport and for East Kilbride Road Club for whom she has ridden for the last three seasons.  Well done Georgia!

Glow Users can now download for free the Microsoft Office 2016 apps on up to 15 personal devices; up to 5 PCs or Macs, 5 tablets (Windows, iPad and Android) and 5 phones. Making these apps available helps Glow users take full advantage of the opportunities these tools offer. The Office apps which include Word, Excel, PowerPoint and OneNote provide a learning platform that translates beyond school and into the world of work.  To download the Office 2016 apps, log in to Glow and either click on the Download Office Now tile or go to the Office 365 Home tile and once in O365, click on “Install Office 2016” at the top right of the page.
Further details here