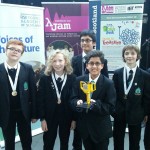 A group of six S1 pupils attended the First Lego League tournament on Tuesday 8 December at the Glasgow Science Centre. The team, with their robot ‘Run For Your Life’, have been practising every week after school since the start of term to compete in the Glasgow regional competition.  The S1 pupils performed extremely well and won the Robot Games Knock-Out Round posting the highest score of all 18 teams in each of the 7 stages.  Well Done to Mahad, Rahul, Roddy, Alistair, Ross and Michael.  More photographs can be viewed here.