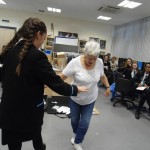 Our intergenerational project , T in The Street, continued with all of the groups getting to grips with the themes of their projects. Some groups got more hands on than others this week, as elderly group member Jessie showed our S5 pupil Iona a few excellent jive steps! Their project is looking at how music and entertainment has changed from Jessie’s era to now. Other groups showed their elderly group members how to search the internet for pictures relating to their projects. The group will meet again next week to continue their research and share life stories.

Congratulations to Chloe Galt (S5) and Katie Miller (S6) who co-organised a MacMillan charity event and helped to raise £317.20.  Chloe and Katie are a part of the East Renfrewshire Events Management class.  The vocational pupils ran an 1950s inspired café and stall in aid of MacMillan cancer.  Well done!

All pupils in S1/S2 and in P6/P7 from our associated primary schools have now received a letter inviting them to the Science, Technology, Engineering and Maths (STEM) fair.  This will be held on Wednesday 7 October 6pm – 8:30pm.  This event has been highly successful over the last few years engaging both pupils and parents in a variety of activities.  We are delighted to welcome back the Glasgow Science Centre with their entertaining and informative show, Disgusting Digestion, as well as welcoming new partners who will be attending for the first time.  We look forward to an exciting and informative evening for both pupils and parents. 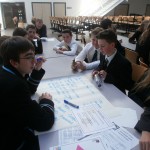 Toady, all S2 pupils participated in a charity workshop based on the Holocaust.  The workshop was delivered by the charity FYFT (From Yesterday, For Tomorrow) who specialise in lessons on the persecution of Jews and homosexuals during WWII.  S2 pupils found the workshop to be an insightful and informative experience.  The workshop was delivered by Blair from FYFT and we would like to thank him for his professional delivery and for ensuring that all pupils had a worthwhile experience.  Our advanced higher S6 pupils were also assisting Blair and helped to ensure that the event was successful.  By doing so, they also gained valuable leadership experience.  Thanks also to Miss Smith who organised the event.  More photographs can be viewed here. 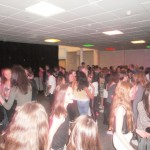 On Thursday 23 September, S1 pupils attended a school disco sponsored by Williamwood’s PTA. This annual event was great fun and everyone had a good time.  Many thanks to the PTA for continuing to support this successful event.  More photographs can be viewed here.

Congratulations to Jenny (S1) who has raised £90,000 for Yorkhill Children’s Hospital. Having been a patient since the age of four,  Jenny felt the desire to give back to this establishment that acts as a beacon of hope for young people with sometimes severe and life threatening illnesses. One of the biggest fundraisers is her “Tea for Jenny” which is a ladies night that, last week, managed to raise £15,000 for her charity. We would like to offer Jenny our best wishes for the future and hope she continues to be an inspiring role model for all children in and out of the school. Well done Jenny! 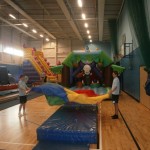 Today, pupils in S1 and S2 participated in The Wall.  This was a great day with a good amount of money raised by the pupils.  Any pupil who has yet to submit sponsor money should do so next week.  More photographs can be viewed here.

The advanced higher art and design exhibition is taking place on Wednesday 30 September in The Street from 7-9pm.  The exhibition will feature work from students from session 2014-2015.  Refreshments will be provided and everyone is welcome to attend. More details here.

On Thursday 17 September, the school was assessed by Eco School Scotland and has received a Green Flag Award. Over the last 3 years, the school has worked tirelessly to made progress in tackling litter, increasing recycling throughout the school and also encouraging pupils to walk or cycle to school. In addition, there has also been a huge amount of work carried out in the eco garden including the building of a greenhouse constructed of recycled plastic bottles. Thanks to all the staff and pupils who have been involved in the eco committee and eco groups.  Congratulations on this fantastic achievement. 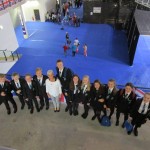 On Friday 18 September, a group of pupils visited the Emirates Arena in Glasgow to watch Great Britain take on Australia in the Davis Cup Semi Final. Britain’s Andy Murray won his match in straight sets against Thanasi Kokkinakis of Australia before Britain’s Dan Evans lost his battle against world number 23 Bernard Tomic.  Kirsty (S5), Erin(S5), Ross(S5), Emma (S3), Mirin (S2), Ciara (S3), Emma (S4), Mark (S2), Douglas (S2), Ross (S4) and Christopher (S4) were among the thousands of fans there to cheer on Team GB.  Many members of the audience, staff and even Andy Murray’s Mum were impressed by how smart our pupils looked! More photographs can be viewed here. 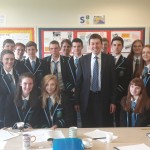 On Friday 18 September, Ken Macintosh MSP spoke to S6 pupils who are applying to study politics at university.  He also hosted a question and answer session with advanced higher modern studies pupils.  Pupils found the session very informative and helpful in preparing them for their current and future choices. More photos here.

East Renfrewshire Council Fostering and Adoption team have had a recent advertising campaign to try and recruit foster carers.  More information can be found at the following website: www.eastrenfrewshire.gov.uk/foster